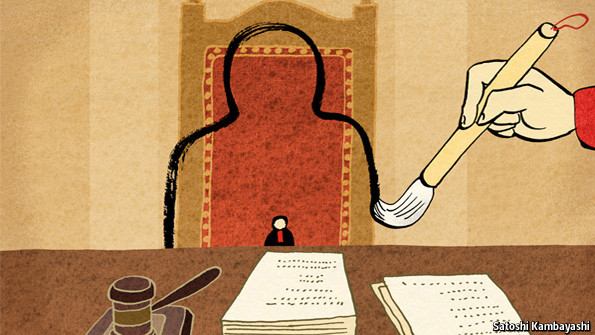 The announcement that October’s Fourth Party Plenum will focus on rule of law has been overshadowed by the simultaneous and long-anticipated news of a disciplinary investigation into China’s former domestic security chief, Zhou Yongkang. (The case’s implications for rule of law are not, outside state media, seen as promising.) Some legal system reforms, though, have already been unveiled, promising greater judicial independence from low-level local governments. From The Economist:

There is a lot of room for improvement. Judges are generally beholden to local interests. They are hired and promoted at the will of their jurisdiction’s party secretary (or people who report to him), and they usually spend their entire careers at the same court in which they started. They have less power in their localities than do the police or prosecutors, or even politically connected local businessmen. A judge is often one of the least powerful figures in his own courtroom.

[…] An oft-stated goal of the reforms is that “judges should decide the cases they hear, and they should hear the cases they decide.” But Mr Xi is also making it clear that the party remains the ultimate arbiter. He is trying to boost loyalty to the party among judges and other court officials by requiring they attend ideological “study sessions”. Most judges and prosecutors are party members.

[…] The rule of law seems to mean running the courts more efficiently but still in the service of the party. [Source]

The article also describes recent reprisals against prominent defense lawyers. One, Pu Zhiqiang, was arrested in June for causing disturbance and illegally obtaining personal information. Another, Gao Zhisheng, is now under surveillance following the end of a three year prison term, and is reportedly no longer able to speak coherently after prolonged solitary confinement.