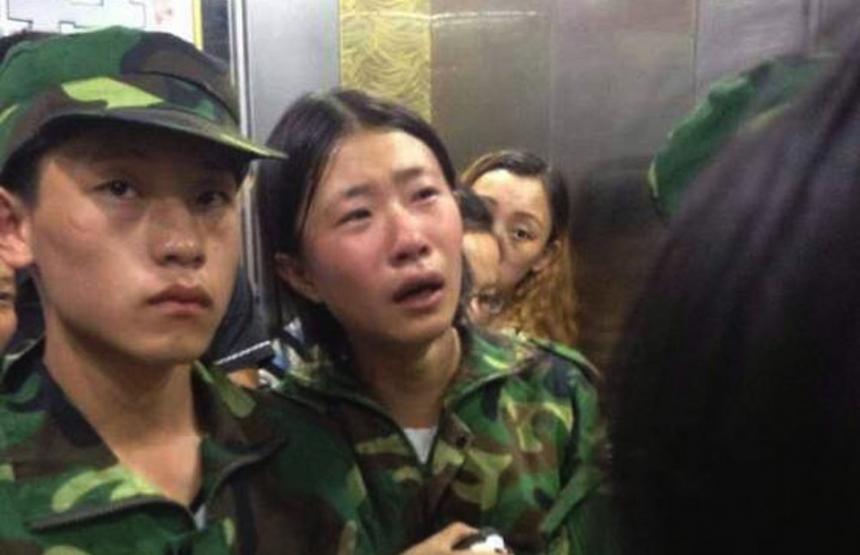 According to the PRC Law on National Defense Education, China’s nationwide compulsory military training for high school and university undergraduates, known as the 军训 (jūnxùn), exists “for the purpose of popularizing and strengthening education in national defense, carrying forward the spirit of patriotism, promoting the building of national defense and furthering socialist cultural and ethical progress.” A report from the South China Morning Post notes that two separate recent incidents have sparked a public debate about an institution that has existed since 1955:

China’s compulsory military training for students has come under the spotlight after brawl between Hunan students and their training officers left 42 people injured.

The suicide of a girl in [Liaoning] province, blamed on the criticism she reportedly endured from military training, also added fuel to the debate.

However, some experts say military training, in its current form, has deteriorated in quality and relevance. […] [Source]

At Tea Leaf Nation, Alexa Oleson details the Hunan brawl, and explains how it is being interpreted as proof of both widespread corruption in China’s military and the decadence of the nation’s youth:

The conflict occurred during a week of military training at Huangcang High School in Hunan’s Longshan, a county of half a million people known for its karst caves. (The bulk of Chinese military recruits are rural youth and the unemployed, not students, but military training sessions are routine at high schools and colleges across China.) The incident traced to what several media outlets describe as a playful tiff between a female student and a drill instructor. The liberal Beijing News reported Aug. 26 that the girl’s classmates came to her defense and ended up pinning the instructor in what was then still a light-hearted dispute. According to the report, that impertinence led to punitive pushups later in the day for the class, and when students balked, other drill instructors ended up attacking the male students. A teacher who tried to intervene was also reportedly beaten.

[…] There’s also deep disagreement about the meaning of the incident. On the popular military-themed forum Tiexue.net, sentiment toward the incident was decidedly pro-military, reflecting a widely-held belief that modern Chinese youth are spoiled and egotistical.

[…] So what do the proverbial brats think? On Weibo, a Twitter-like social media platform whose users skew young, the military bore most of the invective. Although the drill instructors in Longshan were from the People’s Armed Forces, the arm of the People’s Liberation Army (PLA) responsible for training and recruitment, the Weiborati viewed them as emblematic of the entire PLA. The Chinese military’s image has tarnished in recent months with public announcement of graft charges against high-ranking officers General Xu Caihou and Lieutenant-General Gu Junshan in June and April, respectively. […] [Source]