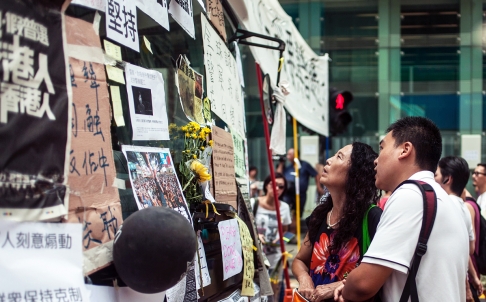 The Wall Street Journal’s Chao Deng, Patrick Boehler and Chen Yifei at the South China Morning Post, and Reuters’ Donny Kwok and Yimou Lee describe the conflicted attitudes of mainland students and others in Hong Kong as many of their local peers take to the streets to demand democracy.

Many students from mainland China studying in the city have kept up their class attendance, while thousands of their Hong Kong classmates have been drawn to pro-democracy marches. In a rare window into how Chinese citizens view the events unfolding in Hong Kong, some mainland students expressed a range of thoughts on the protests Tuesday, from cautious support to apprehension.

Some said they feared that they would risk losing their student visas or disappointing family back at home if they participated. Others said they had mixed feelings about the protests themselves.

“I’m very supportive of these activities,” said Eta Yu, a 21-year-old University of Hong Kong exchange student. But, “I promised my family not to get involved.” [Source]

“I have mixed feelings,” said one Baptist University student from the mainland. “I very much support the Hong Kong people in expressing their concerns. I both admire and envy them for having the ability to do so, but, on the other hand, I’m pessimistic about the outcome.”

[…] Ariel Lee, a student from Heilongjiang, said mainlanders were often wrongly viewed as representatives of the government in Beijing, which they did not choose and don’t represent. “We are cursed and blamed,” she said. “For us students from the mainland, we often get embarrassed lately, because if we have different ideas about Occupy Central, we can not express them like other Hongkongers because it may make us look like [we are] pro-government.” [Source]

“I support their demands, but I don’t support their overly aggressive actions to achieve this, because I think breaking the law is not good,” said Steven, a Chinese PhD student at the Hong Kong University of Science and Technology who only gave his first name.

Others said they were dismayed that Hong Kong people were ungrateful for the benefits they enjoyed under Beijing’s rule.

A woman surnamed Lin from the southern Chinese city of Shenzhen, who was travelling to Hong Kong on Wednesday to shop, said the protesters’ demands for a democratic election were “disrespectful to the mainland.”

“Even though the government has brought a lot of development to Hong Kong, they don’t acknowledge this,” Lin said. [Source]

The protests have also met mixed responses on the mainland itself, where some news has seeped through official barriers. Chinese Human Rights Defenders reports that dozens of those speaking out in support have been detained or intimidated by authorities.