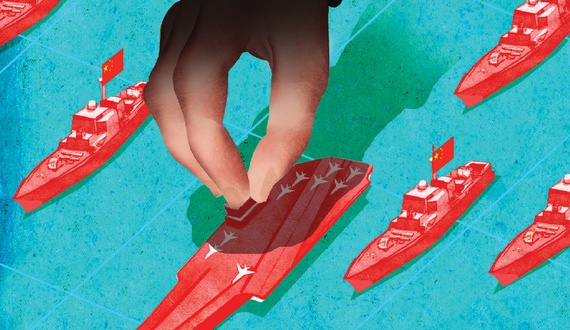 In the Atlantic, Howard W. French offers an in-depth analysis of China’s recent efforts to expand territorial rights by redefining maritime borders in the South China Sea. French’s report provides a description of what’s at stake in the region, offers a timeline of Chinese naval and diplomatic moves over the past two years, surveys the opinions of diplomats and military strategists from neighboring countries, and finally looks at the implications of Chinese goals and increased aggression in the region:

[…] China’s expansion has long been expected. Many observers have said a new cold war, in which a rising China gradually seeks to push the U.S. military out of the western Pacific, is inevitable. Any such conflict would of course be dangerous whenever it happened, because the United States is likely to resist these efforts strenuously. But what’s surprising—and worrisome—is how the timeline for this conflict, or at least its beginning stage, has seemed to accelerate over roughly the past two years. Suddenly and aggressively, China has begun advancing its military interests throughout the region, catching its neighbors and the United States off guard.

[…] However willy-nilly these provocations may at first appear, the struggle that China has launched for dominance of the western Pacific is anything but indiscriminate. It is best understood, rather, as a densely scripted theatrical production in several acts. As long as China has its way, the early phases will likely be played out mostly in the South China Sea, where the country enjoys a huge and growing power disparity compared with much smaller states—Vietnam, the Philippines, Taiwan, Malaysia, Brunei, Indonesia. But the struggle will eventually come to more squarely include Japan and its perimeter, if miscalculation does not bring that conflict to a boil sooner. Over the past year, I have traveled the region extensively, talking with key diplomats and military thinkers among China’s neighbors—the ones now scrambling to respond to China’s incursions—to get their sense of how things might play out, and how the United States might become involved, wittingly or unwittingly. What follows is their perception of the chessboard and likely play in the Pacific—and of where things might take a dangerous turn. […] [Source]