Court Sentences 12 to Death in Xinjiang 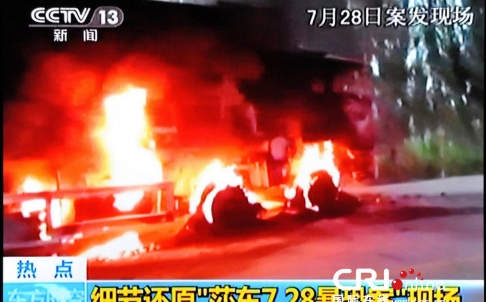 The New York Times reports that a Kashgar court on Monday sentenced 58 people for their involvement in a violent July clash in Shache County, a region in southern Xinjiang known as Yarkand in the Uyghur language:

A Chinese court has sentenced 12 people to death for their roles in a clash in Xinjiang this summer that claimed nearly 100 lives, state media reported on Monday. The clash, in the far west region of China, was one of its deadliest episodes of ethnic violence.

[…] In all, the Intermediate People’s Court in Kashgar convicted 58 people during a brief mass trial that appeared to reflect the government’s determination to combat spiraling violence in Xinjiang with severe punishments.

Among the defendants, 15 were sentenced to death with a two-year reprieve — a sentence often commuted to life in prison — and nine were given life sentences. In addition, 20 other people were handed prison terms ranging from four to 20 years, including a man who was given three years for helping his brother hide from the authorities.

[…] The report did not indicate the ethnicity of the defendants but the names of those listed in the article suggested they were Uighur, the Turkic-speaking minority who populate a string of oasis towns along the edge of Taklamakan Desert in southern Xinjiang. [Source]

The July attack was one of the deadliest of many recent incidents of violence in the restive Xinjiang region, where authorities are engaged in a massive security crackdown that has so far included several mass sentencings. Beijing has labeled the ongoing campaign a “people’s war” against terrorism. Strict government control on information surrounding violence in the region was on full display after the deadly July skirmish, where official casualty numbers—as well as the cause of the skirmish itself—were hotly contested. The most recent official reports on the Shache violence cite 37 killed by “terrorists,” and a further 59 by armed security forces.

Meanwhile, Radio Free Asia reports that three police officers and three government officials were killed by knife-wielding Uyghurs in southwestern Xinjiang last week, possibly an act of violence aimed at avenging the earlier death of one of their brothers while in police custody.