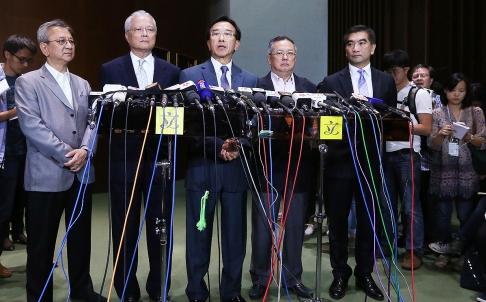 On Tuesday, the New York Times’ Michael Forsythe reported that Hong Kong lawmaker and founding head of the HK Liberal Party James Tien Pei-chun was looking at expulsion from the Chinese People’s Political Consultative Congress (CPPCC) after calling for the resignation of Hong Kong Chief Executive CY Leung. While student and pro-democracy protesters in Hong Kong have been calling for CY Leung’s resignation since October 1, central Chinese authorities have made their support for the chief executive clear.

The lawmaker, James Tien, the leader of the Liberal Party, is set to be expelled from the Chinese People’s Political Consultative Conference for not supporting its resolutions, which include backing Hong Kong’s government, Mr. Tien’s brother, Michael, said in a telephone interview.

The body’s standing committee will meet Wednesday to vote on the issue, said Michael Tien, also a Hong Kong lawmaker.

“The oath made when being appointed is that they would vow to uphold all the resolutions made by the standing committee of the C.P.P.C.C.,” said Michael Tien, a delegate to China’s legislature, the National People’s Congress. “So they considered him as not honoring his oath.” [Source]

The South China Morning Post reports that while the CPPCC did vote for Tien’s expulsion by a massive majority, the former lawmaker stands by his calls for Leung’s resignation, and has also stepped down as leader of the Liberal Party.

Tien resigned as leader of the party he co-founded after the Chinese People’s Political Consultative Conference confirmed his removal.

He did not regret asking Leung on Friday to consider resigning, he said. Tien had been asked by reporters to respond after the former chief executive and CPPCC vice-chairman Tung Chee-hwa said he was “satisfied” Leung was doing “a good job”.

[…] CCTV reported Tien was disqualified for “seriously violating the CPPCC’s charter and resolution”, which took effect in March and requires delegates to “support the chief executive in governing Hong Kong”. [Source]

Also see another South China Morning Post report on Tien’s reputation as a maverick in both Hong Kong politics and during his more than ten years on the CPPCC.

Just prior to the CPPCC’s vote on Tien, a former chief executive of the Hong Kong Monetary Authority official and current China central bank advisor urged protesters to return home, warning that Beijing would punish Hong Kong if they don’t. From Reuters:

A member of China’s central bank’s advisory body warned on Wednesday that Beijing will punish Hong Kong if pro-democracy protests that have paralyzed parts of the Chinese-controlled financial center for a month are allowed to continue.

Joseph Yam, executive vice president of advisory body China Society for Finance and Banking and a former Hong Kong central bank chief, said the city’s financial integrity and stability of its currency were also at risk.

“Hong Kong’s economic prosperity was built on its intermediary role between the mainland and overseas, especially in the financial realm,” said Yam, who urged student protesters to return to their homes. [Source]

Beijing has reportedly punished 47 Hong Kong celebrities who publicly support the protests by blacklisting them from the mainland.