Protesters to CY Leung: “Quit or We Occupy Buildings” 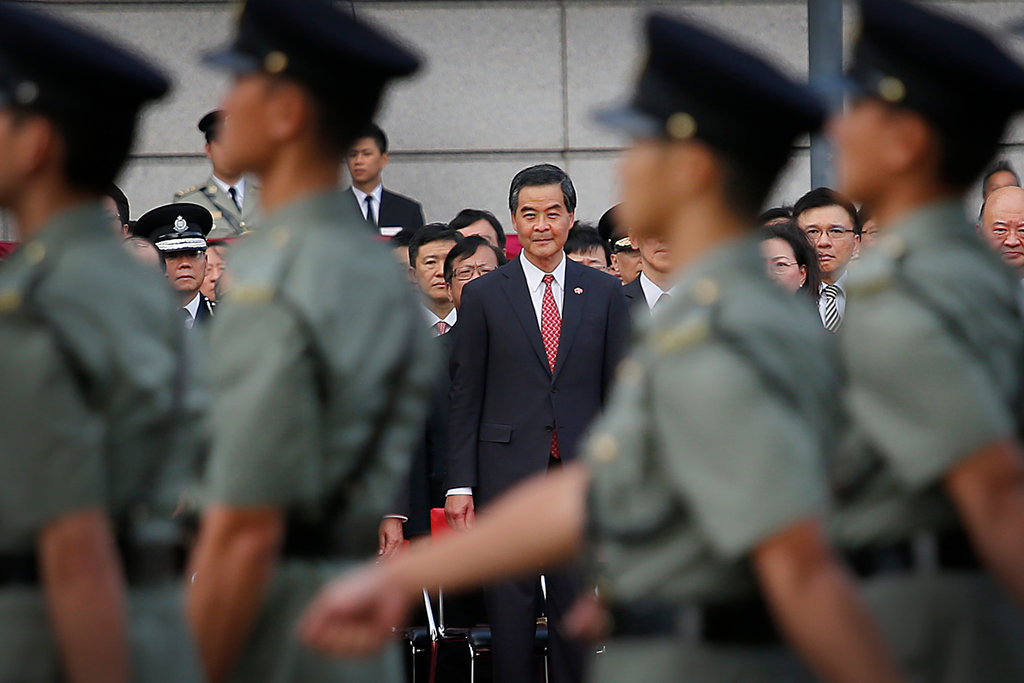 Update (October 2, 9:20 am Pacific Time): As the students’ deadline approached, CY Leung defied protesters’ demands and announced that he would not resign. Beijing also left no room for negotiation. William Wan, Ishaan Tharoor, and Daniela Deane at the Washington Post report:

Hong Kong’s ultimate rulers in Beijing made clear through messages in state media that they were leaving no room for compromise.

An editorial Wednesday in the People’s Daily newspaper called the demonstrations illegal and said ominously that if they continue, the “consequences will be unimaginable.”

The paper, considered the flagship mouthpiece for the ruling Communist Party, followed up with front-page editorial Thursday warning that continued protests would drive Hong Kong into “chaos.”

The editorial also expressed full support for Leung Chun-ying, Hong Kong’s chief executive. A faction of students among the demonstrators has threatened to escalate protests if Leung does not resign by the end of the day Thursday. [Source]

For live updates on the situation on the ground in Hong Kong, follow live blogs from the South China Morning Post and the Wall Street Journal as well as #OccupyCentral and #UmbrellaRevolution hashtags on Twitter.

Original post from October 1, 2014 Pacific Time:
As pro-democracy protests in Hong Kong continue, student leaders have demanded the resignation of  chief executive CY Leung, threatening to intensify demonstrations and occupy important government buildings if he doesn’t step down by tomorrow. The AP reports:

By raising the stakes in the standoff, the protest leaders are risking another round of confrontation with the police who are unlikely to allow government buildings to be stormed. It also puts pressure on the Chinese government, which has so far remained mostly silent and preferred to let Hong Kong Chief Executive Leung Chun-ying deal with the crisis.

[Vice secretary of HK Federation of Students Lester] Shum demanded that Leung resign by the end of Thursday. He said there was “no room for dialogue” with Leung because he ordered police to fire tear gas at protesters over the weekend, after the street protests started Friday.

“Leung Chun-ying must step down. If he doesn’t resign by tomorrow we will step up our actions, such as by occupying several important government buildings,” he said, adding that demonstrators won’t occupy “essential” government offices, such as hospitals and social welfare offices.

[…] Chan Kin-man, one of the leaders of another protest movement called Occupy Central, said the protests would continue as long as the Hong Kong government failed to give a satisfactory response to their demands.

“I hope people will understand why the action keeps on escalating. It’s because the government is getting more and more closed without listening to Hong Kong people,” he told The Associated Press in an interview on the street. “If the government can give us a proper response in due course I think we can end the occupation immediately.” [Source]

While student leaders have given Leung a tight timeframe to step down, the New York Times reports on the Hong Kong government’s strategy of waiting the protesters out:

Although crowds of pro-democracy protesters swelled further here on Wednesday, a national holiday, Hong Kong’s chief executive and his inner core of advisers have decided, with support from China’s leaders, that their best strategy is to wait and hope that the disruption of everyday life will turn local public opinion against the demonstrators.

[…] Leung Chun-ying, the chief executive, and his advisers have decided not to use force to disperse the demonstrations but also not to hold negotiations with protest leaders for now, said people with a detailed knowledge of the policies of the Hong Kong government and Beijing. Nor has there been any serious discussion of Mr. Leung’s resigning, as the protesters, who number in the tens of thousands, are demanding.

[…] The city’s leadership has concluded that it would be pointless for Mr. Leung to sit down with protest leaders, although a few informal contacts have been made with democracy advocates, and a few of Mr. Leung’s friends have recommended negotiations. Beijing has given the Hong Kong government only a little room to negotiate the details of how the next chief executive will be elected in 2017 —the fundamental issue for the demonstrators. [Source]