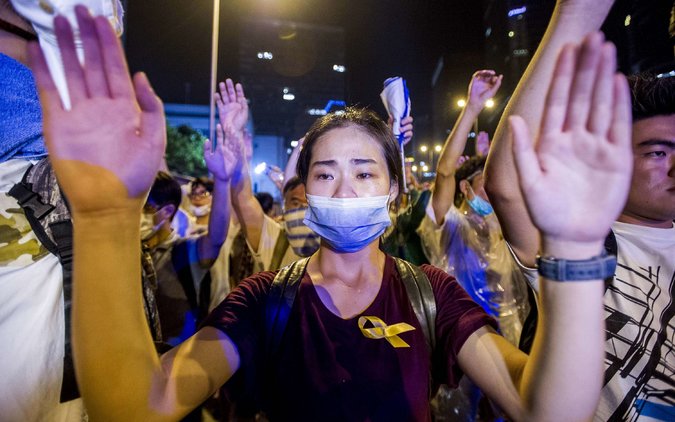 The demonstrations in Hong Kong have largely wound down on the streets, though in some areas protesters still remain in encampments. The continuing street protests have transitioned into a new phase as government officials and student leaders negotiate the terms for discussions, which are reported to start on Friday. John Ruwitch and Clare Baldwin provide an update on the situation for Reuters:

Student-led protesters early on Monday lifted a blockade of government offices that had been the focal point of their action, initially drawing tens of thousands onto the streets. Civil servants were allowed to pass through the protesters’ barricades unimpeded.

[…] The stalemate appeared late on Monday to be nearing a potential turning point, however, when a senior official said formal talks to address the protesters’ demands and end the demonstrations may begin later in the week.

After preparatory discussions with student representatives on Monday night, Lau Kong-wah, the Hong Kong government’s Undersecretary of Constitutional and Mainland Affairs, said both sides had agreed on general principles for the formal talks.

“I think today’s meeting was successful and progress has been made,” he told reporters.

“We have confirmed that we will hold the first round of meetings on Friday at 4 p.m.,” Lau Kong-wah, the government’s undersecretary of constitutional and mainland affairs, said after a discussion with student representatives on Tuesday.

The talks would focus on “the basis for political development and the legal implementations of these political reforms”, he said, referring to plans for the 2017 election of the Chief Executive, Hong Kong’s leader.

Student leader Lester Shum confirmed that the students would take part as a way to convey their message to senior government leaders, but said he was “angry and disappointed” that the talks were expected to be limited in scope.

The protests would continue until “practical measures (have) been forged between the government and the people”, he said. Any violence or attempts to clear the students would affect the talks, he said. [Source]

While the majority of protesters have left the streets, some are staying, as Clement Tan, Cathy Chan and Jonathan Browning report for Bloomberg:

The resolve of some remaining demonstrators may complicate efforts to bring the standoff to a peaceful end. Any attempt to remove them by force risks backfiring, as police saw when the use of tear gas on Sept. 28 brought thousands more onto the streets. When gangs attacked demonstrators at the Mong Kok and Causeway Bay sites on Oct. 3, the protests swelled anew.

“After seeing what happened in Mong Kok, I decided to come here instead to protect other students,” chemistry student Meteor Yau, 19, said yesterday. “For us in Mong Kok, we don’t belong to any leaders. We don’t have to listen to anyone.” [Source]

In the New York Times, Michael Forsythe and Alan Wong report on the shifting strategy of protesters, as they begin to focus on extracting concessions from the government through discussion rather than confrontation:

Now, preliminary talks have begun, and the student-led movement has strengthened the hand of Hong Kong’s democratic lawmakers.

“The power shown by the people in this civil protest is the power of the powerless,” Albert Ho, the former head of the Democratic Party and a candidate for chief executive in 2012, said in a telephone interview. “We have been able at least to create sufficient pressure on the government for the commencement of a dialogue. They know that the theme of discussion is political reform. Previously, everybody treated this as a closed chapter.”

Although the protest leaders and the remaining participants, who still numbered in the low thousands, insisted that the so-called Umbrella Revolution was a long-term project that was far from over, there was a sense on Monday of a winding down and, after 11 days of street protests, a dissipation of energy.

“I’m very, very, very tired,” said Dennis Chan, 28, letting out a sigh as he prepared to go home after 10 days at the sit-in near the government center. “We all are.” [Source]

While many observers assume that the retreat from the streets means the protest movement is winding down, many participants insist that they are just entering the next phase in what will be a long-term battle. Deutsche Welle interviewed analyst Rebecca Liao:

Reporters on the streets speak of a feeling that the “end game” may have well begun. What is your view on this?

In the sense that both sides want resolution at this point, yes, the end game has begun. At no point did the protesters intend to cause a revolution.

They all claim to want “universal suffrage” in electing the Chief Executive, but, in keeping with the issues that sparked these protests, each has their own idea of what this is exactly. It’s not an uncommon problem for mass movements to have such varied constituents.

The outcome, unfortunately, is that without a unified goal, the olive branches extended by the government will seem increasingly attractive, and it will become clear that the group that first accepts an offer will walk away most satisfied. This round of protests will end as soon as that first agreement with the Hong Kong government is reached. [Source]

In a statement for Radio Free Asia, Bao Tong, a top aide of Zhao Ziyang during 1989 who is still under house arrest, called on the students to withdraw from the streets in order to regroup, saying, “The seeds have already been sown, and they need time to lie fallow.”

Some observers believe that without agreements on substantial political reforms, the lasting impact of the protests will be more control of the city by Beijing, not less. Edna Curran, Charles Hutzler, and Kathy Chu report for the Wall Street Journal:

The pro-democracy protesters’ civil disobedience, which has been condemned by Beijing, may prompt China to look for ways to assert greater control in the future, experts say. Possible steps include subtle but significant moves to increase surveillance in the city, influence the press, and sway appointments of officials with authority over student protesters such as university presidents—who have historically been allowed a large degree of autonomy.

“However this crisis is resolved, it is only likely that Beijing’s intervention into Hong Kong’s domestic governance will step up much further,” said Peter T.Y. Cheung, an associate professor at the University of Hong Kong.

But Beijing will also have to tread lightly given Hong Kong’s economic importance, much of which depends on a perception that its judiciary, press and other institutions are independent. [Source]

Others note that until Beijing and the Hong Kong government make some concessions to the protesters’ demands, resentment will remain high among the protesters, who represent a wide swath of Hong Kong society. Kerry Brown writes:

Beijing doesn’t have it all its own way, however. It is likely protestors will get off the streets, or at least that their numbers will dwindle. Business might return to normal. But resentments are likely to simmer. Trust in Beijing is low. Since 1997, three chief executives have largely failed—the first removed from power half way through his second term, the second after serving only eight of a possible 10 years, and C Y Leung, who is unlikely to see a full first term, let alone get into a second.

For a place with such high per capita GDP and a world-class, modern economy, Hong Kong has proved tough to rule. Perhaps this would be solved by giving its citizens more direct choice in who runs their city, so that they might feel, at least, like stakeholders with some vested interest in seeing their leaders succeed. If leadership failure continues after 2017, Beijing will have to think again. [Source]

Yet even if protesters do not get what they are hoping for from the meetings with officials, their efforts have still been worthwhile, writes Mei Fong in a response to an op-ed by Martin Jacques:

To understand the Hong Kong protests, we need to separate what’s realistic from what’s right. Clearly, Hong Kong’s protestors have an uphill slog. The possibility of Beijing making significant concessions are almost nil. But it doesn’t make for an intelligent argument to denigrate their goals or aspirations, or portray them as adolescents acting out. There are, of course, quite a lot of young protestors, but so far—though things may of course change—the peaceable, reasoned nature of the protests has been marked by a maturity not seen in Tahrir or Tiananmen. [Source]

In The Guardian, Lokman Tsui makes a similar point:

Let’s be realistic. None of the students I have spoken to expect “democracy” to magically solve all their problems. They also understand that many are sceptical about their chances to change the government’s mind. But history has taught them not only that change is possible but that if they don’t do it, no one else will. Armed with little more than clingfilm on their faces, face masks, safety goggles, and umbrellas as protection against pepper spray and teargas, they fight for their dream of a better future. A little hope can go a long way. [Source]

For the New York Times, Jonah Kessel interviewed one student about what she had learned from participating in the movement:

Some scenes from Hong Kong this week:

Around 100 protesters are scattered in Admiralty this morning http://t.co/94dG35eHH0 pic.twitter.com/LfqlumMflk

A message outside Hong Kong government offices at Tamar. For the Chinese Communist Party. pic.twitter.com/U5FsBVspZ1

Moon rises over bridge above Hong Kong democracy protest and a banner reminding people that Everyone Could Be Batman pic.twitter.com/tBy6XJNFXW

"We have only one shot Don't give up" – captures mood of #OccupyHK protesters who say they will stay "until the end" pic.twitter.com/NC0gkd41DZ