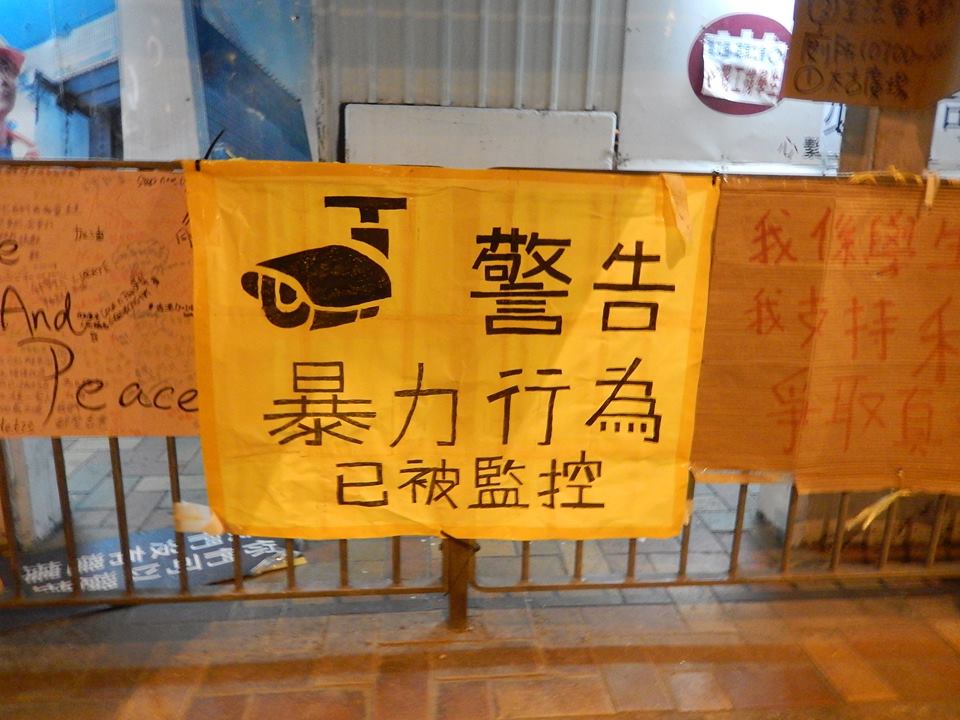 In the densely populated Mong Kok district, police managed to earlier repel protesters from a major intersection but have faced a significant pushback.

In the early hours of Sunday, demonstrators launched a fresh midnight assault, suddenly putting on helmets and goggles to ready themselves, before surging forward to grab a line of metal barricades hemming them into a section of road.

Amid screams and cursing, hundreds of officers began whacking the protesters who raised a wall of umbrellas. Pepper spray was used intermittently amid violent scuffles. The police then surged forward with riot shields, forcing protesters back.

“Black Police! Black Police!” the crowds shouted amid the fray. One protester in a white T-shirt and goggles was beaten by a flurry of batons leaving him bleeding from a gash in the head. Several protesters were taken away. Fire trucks with water cannons were stationed further down the street but weren’t used. [Source]

Al Jazeera reports that 20 people were injured in the recent clashes:

Dozens of police with shields and helmets pushed into a crowd of protesters gathered at barricades in the shopping district of Mong Kok early on Sunday, striking at them repeatedly with batons.

Some demonstrators had to be carried away on stretchers and others were treated for head wounds, fractures and bruising, according to AFP reporters and medics at the scene.

Police said in a statement that they had used “minimum force” as protesters “suddenly attempted to charge” their cordon lines.

The city’s government information service said 20 people involved in protest activities had been injured between 10pm and 6am, but would not specify how many were demonstrators or police, the extent of the injuries, or if they all took place in the Mong Kok area. [Source]

By midday Sunday, calm had been restored in the area, according to a report from the Wall Street Journal.

Footage from the conflicts in Mong Kok on Friday night were posted on Vimeo:


On Saturday, the Hong Kong government confirmed a plan to meet with students and said talks would take place Tuesday. From AFP:

[Carrie] Lam said the talks would be focused on constitutional reform, with both sides allowed to bring five members to the meeting that will last around two hours and will be broadcast live.

But hopes of any breakthrough are slim, with the government unlikely to cede to protesters’ core demands — Leung’s resignation and free leadership elections for the semi-autonomous Chinese city in 2017.

Beijing insists that candidates for the vote must be vetted by a committee expected to be loyal to China — and Leung has warned that the country’s communist authorities have no intention of backing down.

“I’m not sure anything will come out of it because the government does not seem to listen to public opinions,” 15-year-old student protester Crystal Yip told AFP. [Source]

A 23-year-old man has been arrested in Hong Kong for allegedly calling on his readers to attend the protest marches and “to charge at police.” From RTHK:

The suspect was arrested in Tin Shui Wai on Saturday night. A spokesman said the man is alleged to have posted messages online over the past few days.

He’s also alleged to have taken part in an illegal assembly in Mongkok on Friday. [Source]

Meanwhile, Paula Bronstein, an American photojournalist was detained and the Foreign Correspondents Club has reported that police have interfered with the work of other journalists covering the protests.

For up-to-the-minute updates, read the live blog from the South China Morning Post.

Occupy al fresco. Digs in Mong Kok not nearly as comfy now as in the Admiralty Tent City. pic.twitter.com/2us1govzQX

Unclear in Mongkok if protesters much involved in scuffles, just instigators all around up for a fight (democracy not really an issue atm)

Aggressive atmosphere in Mongkok as older crowd has emerged to yell at protesters (police a few feet away look on) pic.twitter.com/zuuo4z3aMI

Seems like such a game: was in Mongkok last night before clashes, am here again in morning- police gained no ground pic.twitter.com/2qRsKf8tbj