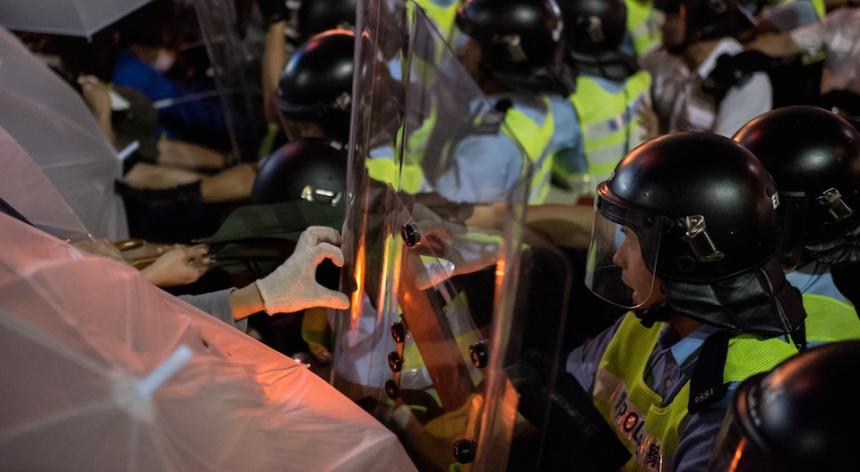 After police cleared out protest camps in Hong Kong’s Mong Kok district yesterday with little resistance from the pro-democracy protesters who had been occupying streets in the area for three weeks, demonstrators returned hours later, and violent clashes with police ensued. The BBC reports:

Fresh clashes have broken out between Hong Kong police and pro-democracy protesters, with officers using pepper spray and batons against the crowd.

The scuffles erupted as demonstrators tried to reclaim a protest site in Mong Kok cleared by police early on Friday.

[…] Riot police cleared tents and barricades from a Mong Kok road early on Friday morning, saying it was needed to ease traffic congestion caused by the rallies.

There were no reports of resistance from any of the demonstrators, some of whom regrouped nearby.

However, the crowd of pro-democracy protesters swelled on Friday evening, and some activists attempted to break through police lines to re-occupy the road. [Source]

More details on the heavy force and scattered arrests that met the returning protesters, from Sylvia Hui and Kelvin Chan at the AP:

[…] One protester was seen bleeding from his forehead as he was carried to a police van, moments after he was forced to the ground by officers. In scenes repeated throughout the evening, officers used batons to beat back umbrellas used by the crowd of young protesters to defend themselves from pepper spray.

“The police have lost control. They are beating up protesters like we’re animals. We are angry. The students are our future,” said Tommy Lee, a 45-year-old technology worker who was outraged at seeing police handcuff four protesters who appeared to be high school students

[…] Also detained was Bangkok-based Getty photojournalist Paula Bronstein, who was hauled away by police for standing on the hood of a Mercedes-Benz amid the melee. Hong Kong’s Foreign Correspondents Club issued a statement demanding her immediate release, saying that police have threatened and intimidated other journalists covering the protests. [Source]

For a collection of Tweeted images and narration from the chaotic streets of Mong Kok, see below.

The crackdown comes after embattled Chief Executive CY Leung, whose resignation has been one of protesters’ primary demands, agreed yesterday to begin talks with student leaders after the government cancelled negotiations last week. Earlier, a report from Fairfax Media showed that Leung had profited in brokering a deal with an Australian firm prior to taking office. Some have speculated that information about Leung’s deal may have come from someone with ties to Beijing, thus providing the central government a reason to dismiss Leung and quell the protests. A report from Keith Bradsher and Chris Buckley at the New York Times further indicates the veiled role that Beijing has been playing in regards to Hong Kong:

On many mornings throughout the pro-democracy protests that have convulsed Hong Kong, white Toyota Coaster vans with special black license plates have set out from city government buildings here to a tropical resort across the border in mainland China.

[…] The secretive commute reflects the intimate yet largely hidden role that the Chinese Communist Party leadership has played in the crisis in Hong Kong. According to interviews with six current and former Hong Kong and Chinese government officials, as well as experts in both countries, it is China’s leaders more than Hong Kong’s who have directed the broad outlines of the response here. With China’s needs foremost in mind, they have calibrated a careful balance between a steadfast refusal to give ground on the protesters’ demands for democratic elections and the need to avoid widespread bloodshed that would further destabilize the city, a global financial center.

[…] “Clearly, it’s Beijing that is dominating the decisions about this movement,” said Jin Zhong, the editor of Open, a Hong Kong current affairs magazine that focuses on Communist Party politics. “Of course, they wouldn’t admit that.” […] [Source]

In a detailed report for Tea Leaf Nation on increasingly heavy-handed crackdowns throughout Hong Kong, Suzanne Sataline describes the current stakes as skirmishes continue in Mong Kok, noting the strong resolve of protesters:

At stake is the city’s political future. Protesters, many of whom are students, have said they will stay on city streets until Beijing agrees to retract an elections plan that would restrict candidates for the city’s next chief executive to those vetted by the mainland’s Communist government. But officials in Beijing say the government will not relent. Hong Kong’s administration, closely managed by Beijing, has sent an increasingly exhausted and irritable police force to try to dislodge protesters. […]

[…] Losing Mong Kok would mean the students would have “nothing to bargain.”The government, they said, didn’t listen when tens of thousands of people poured onto the streets on July 1, right after Beijing released a paper asserting its authority over Hong Kong. “We never had a response. It shows the government doesn’t listen to us,” Tse said.

[…] Although the Leung administration could likely quell some unrest by offering compromise, it appears increasingly likely that the sit-ins and roadblocks are the start of a long period of unrest and agitation. How long can protesters keep this up? “Until [authorities] give us something solid,” said Mason Ma, 30, a high school teacher, overlooking the new barricades. “Whenever they clear up, we will come again to take our place back.” [Source]

Tense in Mong Kok tonight as protestors and police vow not to lose ground #occupyhk pic.twitter.com/9Rxsjuqmni

This woman is selling sugar cane juice to #OccupyMongkok protesters as police look on #OnlyinHK pic.twitter.com/FwBh4xlrWn

Chaos for blocks, police spread very thin, hear screaming in the distance, and on every side street more people pic.twitter.com/FbjCsBny0A

Plainly many of these police are exhausted. pic.twitter.com/6ptDE9nWcB

Each skirmish becomes a drama that galvanizes the crowd. pic.twitter.com/C84gbnae4n

Fortune teller whose table is in the middle of all this is still open, has client. No photo – bad karma. #OccupyHK

Random act of kindness. Police officer here in mongkok handed a bottle water to a tired protester. Applause and cheers from all the students

Captain America has some trouble with the police in Mong Kok #HongKong #OccupyCentral pic.twitter.com/Dvd3CRsZGF

The current protester/police line in Mongkok. Been peaceful, but tense for last half hour. pic.twitter.com/zRlpX2tXYM

police pushed protesters back to pavement, but other batch sat down again #OccupyHK pic.twitter.com/b70DgVFXsb

Protesters and policemen hurling insults at each other in Mongkok. pic.twitter.com/IVGiI1FZFo

This was thrown from a building: Ultimatum to protesters, if you don't leave by 11:14pm I'll throw poo #HKProtests pic.twitter.com/pWYWJHaS2t

#OccupyHK protester: "For many like me our only purpose is to protect the kids. Police are beating them like animals, funded by our taxes"

#OccupyHK protester: "After this, Hong Kong will be very different. The young will no longer trust the government and its police." #URHK

Broken umbrellas on what was once mongkok protest camp. "Under the vast sky" still being sung though across Nathan rd pic.twitter.com/7GkuNxEfNK

Feeling of anticipation on Lung Wo Rd as a couple hundred amass, few police, but w dogs pic.twitter.com/Se5TTPoO1s

Police beat back protesters trying to spill on to southbound #OccupyHK pic.twitter.com/PYzmcF62tS

A third standoff in the space of 100metres now on Nathan Rd northbound.

A man collapses in agony after being hit with pepper spray by police during clashes in Hong Kong @AFPphoto pic.twitter.com/Ug8YGe5A2V

On my side, the original protest zone this afternoon. Other side, police. Behind them, another layer of protesters. pic.twitter.com/l339aGIVSY

Barricades going back up on Nathan Road. Also tents. No end game in sight. pic.twitter.com/QVE1m5XG7P

About 100 police officers in helmets assemble at the Argyle/Nathan junction. pic.twitter.com/68UnzngxVK

Crowd chanting "sit sit sit" to a barking police dog standing (on all fours) on center island of road. pic.twitter.com/VVt6qRjJid

Police have sealed off Nathan at Argyle Road. A long, tense night ahead. pic.twitter.com/ur2ZkLzyup

Occupied section of Nathan Road penned in by police at both ends. pic.twitter.com/RRlrXaq2c7

Protesters have taken back Argyll Road in #Mongkok after spilling through police cordon. Much cheering #hongkong pic.twitter.com/uDpFEW1ZNh

Protesters with hands up face off with police tonight in Hong Kong @AFPphoto pic.twitter.com/5rUEGZU5QU

This poster all over Nathan Road: "Recover Mong Kok." pic.twitter.com/pVWMlb3kYA

Warnings "Police stop charging you have been surrounded" "put down your shield and surrender" #OccupyHK pic.twitter.com/G62WAsGSVR