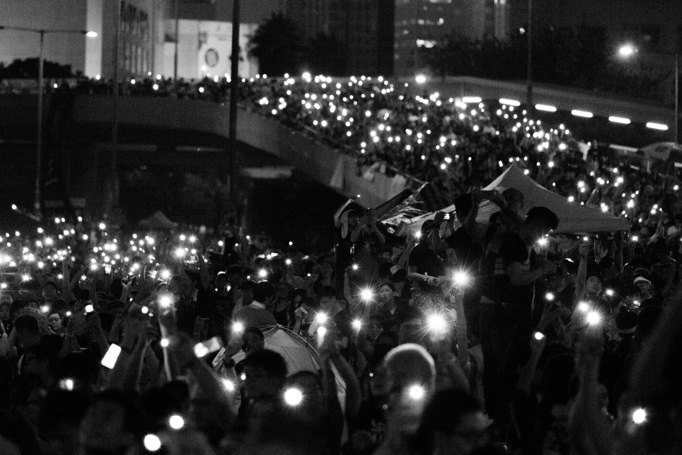 Student and Occupy Central protesters have been on the Hong Kong streets for nearly two weeks airing an array of grievances. Foremost among these are calls for the open nomination of candidates for the 2017 election of chief executive, and the resignation of Chief Executive CY Leung. Yesterday, Fairfax Media reported that Leung had accepted US$6.5 million in contract fees from an Australian engineering firm, a revelation that could bolster student demands for his removal. Today, the Hong Kong government cancelled planned talks with student protesters, which had offered some hope of resolution. For Reuters, James Pomfret and Clare Baldwin report:

Hong Kong called off talks with protesting students on Thursday, dealing a heavy blow to attempts to defuse a political crisis that has seen tens of thousands take to the streets to demand free elections and calling for leader Leung Chun-ying to resign.

[…] “Students’ call for an expansion of an uncooperative movement has shaken the trust of the basis of our talks and it will be impossible to have a constructive dialogue,” Chief Secretary Carrie Lam said on the eve of the planned dialogue.

[…] She blamed the pull-out on students’ unswerving demands for universal suffrage, which she said was not in accordance with the Asian financial centre’s mini-constitution, the Basic Law, what she described as their illegal occupation of parts of the city and fresh calls for people to rally.

Student leaders accused the government of using petty excuses to derail the talks and called for more people to occupy the streets, after numbers fell significantly following mass rallies that saw police fire tear gas on the crowds. [Source]

While the number of protesters began to dwindle early this week, news that the negotiations have been scrapped seems to have helped breathe new life into the movement just as use of tear gas against protesters invigorated it before:

There is anger in admiralty about govt cancelled talks. But more confusion why they would make such a move that would reinvigorate movement.

The New York Times’ Michael Forsythe and Keith Bradsher place this most recent decision in the context of the government’s widely varying responses to the peaceful protesters, noting that diminishing turnout on the streets and growing public annoyance at the ongoing disruption could have prompted the cancellation:

[…T]he protest, which has complicated commutes and hurt businesses in the occupied areas, has waned and recently appeared to have been losing popular support.

[…] The dwindling support for the protesters may have been a factor in the government’s decision to renege on talks.

[…] The decision continued a pattern of shifts and parries by the government in response to the crisis. In the past two weeks, the government sent in riot police with tear gas and pepper spray, then pulled them back; refused to talk to the protesters as a matter of principle, then called for talks; disclosed a plan to wait out the protests, then appeared ill-prepared as the protesters were attacked by violent gangs. [Source]

A public statement from Chief Secretary Carrie Lam, Hong Kong’s second-ranking official, indicates that the government may have intended to highlight the civic disruption caused by the ongoing protests:

[…] the “Occupy Central” protests, now into its (their) 12th day, have already caused a lot of disruption to the daily life of Hong Kong people, and significant loss to businesses. These unlawful activities must end as soon as possible. In the past few days, we have tried to persuade protesters to reopen some of the key roads, such as Queensway, but without success. I urge protesters to take into account public interest and retreat from the occupied sites immediately. It is therefore misleading and not acceptable to Government for these talks between the Task Force and the students to be linked to whether and when the protests would stop, and, worse still, to be deployed as an excuse for “Occupy Central” organisers to incite more people to join the process. […] [Source]

Is HK government being dumb & stubborn in canceling talks? Or trying to draw students into a trap? http://t.co/rVIXdSBwkS