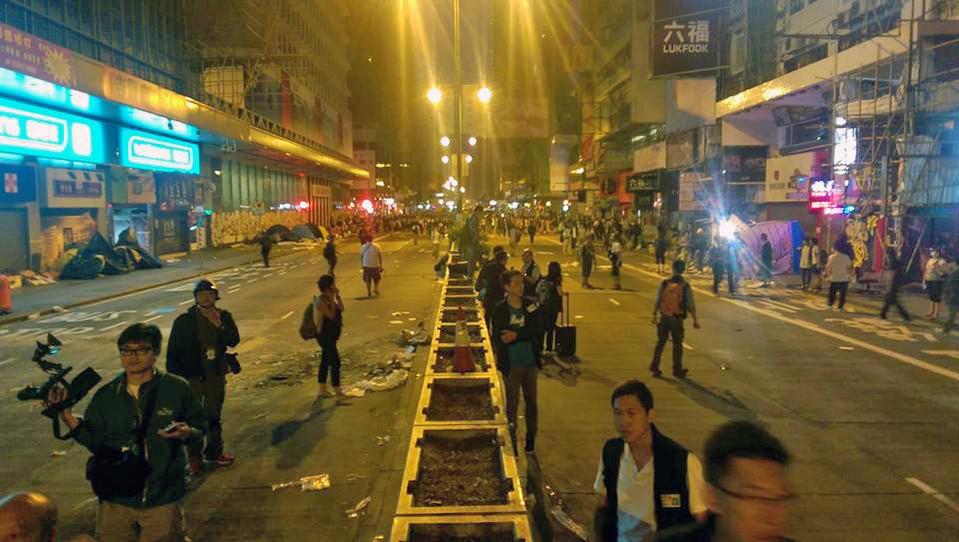 The operation in the gritty and congested Mong Kok district – across the harbour from the heart of the civil disobedience movement near government headquarters – came while many protesters were asleep on the asphalt in dozens of tents or beneath giant, blue-striped tarpaulin sheets.

The raid was a gamble for the 28,000-strong police force in the Chinese-controlled city who have come under criticism for mounting aggressive clearance operations using tear gas, baton charges and a violent beating of a handcuffed protester by seven policemen on Wednesday.

Storming into the intersection with helmets, plastic riot shields and batons at the ready from four directions, the deployment of 800 officers caught the protesters by surprise. Many retreated without resisting. [Source]

The raid came just after Chief Executive C.Y. Leung announced a willingness to launch talks with student protesters, after his government cancelled planned negotiations last week. But Leung still made it very clear that the government would not back down on its position on electoral reforms, which has been a key demand of protesters. Gary Cheung, Joyce Ng, Samuel Chan and Tony Cheung report for the South China Morning Post:

Leung said talks with the students had “to be based on the Basic Law and the decision by the National People’s Congress Standing Committee”. The decision ruled out public nomination of candidates, which is central to the students’ demands.

“There is no issue of making a compromise or not. We can’t turn something unlawful into lawful,” Leung said.

[…] Leung insisted that the talks and the clearance of protest sites were separate matters, and did not rule out clearing more sites during the negotiations.

Alex Chow Yong-kang, of the Federation of Students, said the group was willing to resume dialogue. The federation would accept a university president as moderator, but would also be open to a retired chief justice such as Andrew Li Kwok-nang.

Meanwhile, Leung faces new questions about his contract with Australian company UGL, which he had failed to publicly disclose. John Garnaut reports for Fairfax Media that Leung tried to ensure millions of dollars for himself in the deal before running for chief executive:

In return for co-operating on the £77 million sale of DTZ, the real estate advisory empire he’d helped to build, Mr Leung wanted the Australians to not only underwrite £1.5 million in bonuses, and pay £4 million in business wealth that had been wiped out, but also to compensate him for £3 million that he’d sunk in the firm’s loss-making franchise in Japan over the previous five years.

“It was like ‘here’s all my losing lottery tickets, could you buy them’,” says one party to those negotiations in November 2011.

But it was not the audacity of Mr Leung’s claim so much as the manner in which he made it that illuminates his political predicament today, as he battles mass pro-democracy protests across the city and widespread calls for him to resign as the city’s Chief Executive. [Source]

Some observers have speculated that news of Leung’s deal must have been leaked to the media, possibly by someone with ties to Beijing, in an effort to provide a convenient justification to dismiss Leung in order to quell protests. Shai Oster reports for Bloomberg:

The timing of the disclosure is raising eyebrows about who leaked the material and the motive behind it.

“These documents weren’t released as we have non-poach and non-compete agreements with some 100 executives, and they’re not published or on-the-record,” UGL Chief Executive Officer Richard Leupen said in an interview. “To our mind, it’s a confidential matter, so it was either taken or leaked out by someone who had access to the information.”

UGL said in a statement the payment was a routine non-compete clause as part of its acquisition of DTZ, a bankrupt real estate consultancy where Leung was a director, shortly before he took office in 2012. [Source]

But an “authoritative source” close to Beijing denied to the South China Morning Post that there was any official role in the release of the information and restated the Chinese government’s support for C.Y. Leung.

Scenes from Mong Kok on Friday:

.@AFP: Map of police action to remove road blockades of #OccupyHK this week including morning's clearance in #MongKok pic.twitter.com/Su7bQXUGwV