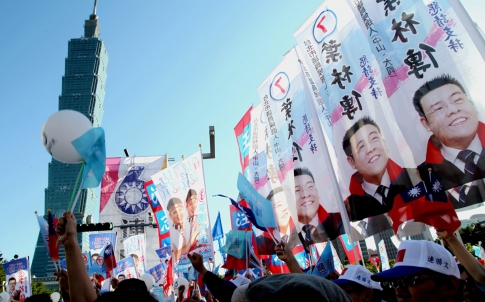 With Taiwanese voters electing some 11,000 officials at various levels of local government on Saturday, The Wall Street Journal’s Eva Dou and Jenny W. Hsu report that Beijing is watching the fortunes of its former Nationalist rivals closely:

In Saturday’s polls for mayors, town councilors, village chiefs and other local positions, political watchers are focusing on the bigger cities, particularly the capital, Taipei, and the central city of Taichung. The cities are usually strongholds for the ruling Nationalist Party, but pollsters put the party, also known as the Kuomintang, or KMT, on shaky ground.

A drubbing would position the KMT badly for holding on to the presidency when President Ma Ying-jeou stands down in 2016 and would boost the chances of the opposition, some analysts said.

[…] If the KMT loses major seats in the local elections and can’t regroup effectively, “they could potentially lose in 2016,” said Chang Ya-chung of National Taiwan University. “That could have a big effect on cross-strait relations, since Beijing’s and Taiwan’s new leaders would have to figure out first if they can trust each other.” [Source]

South China Morning Post’s Lawrence Chung reports that the KMT is reaching across the strait to try to boost its performance:

The unfavourable poll results have prompted the KMT to try to mobilise some of the 700,000 mainland-based Taiwanese businessmen to return to the island to vote, Ho Hsi-hao, former head of the Taiwanese Businessmen Association in Zhangzhou , said.

While he said a number of businessmen there had expressed their support by promising to return to Taiwan to vote, Liao Wen-lung, the president of the Taiwanese Businessmen Association in Zhangzhou, said few businessmen were really interested in doing so. [Source]

The KMT is not alone, however. Reuters reports that the Communist Party’s United Front organization has also encouraged sympathetic Taiwanese businessmen to fly home to vote, apparently arranging heavily discounted flights on several carriers to smooth their path. (Cheap travel may also have contributed to the elections’ emergence as an attraction for mainland tourists, reported by BBC Monitoring.) These efforts, Yimou Lee and Faith Hung write, are part of a broad campaign to woo Taiwanese ranging from businessmen to students and from doctors to generals:

United Front documents reviewed by Reuters, including annual reports, instructional handbooks and internal newsletters, as well as interviews with Chinese and Taiwanese officials reveal the extent to which the agency is engaged in a concerted campaign to thwart any move toward greater independence by Taiwan and ultimately swallow up the self-ruled island of 23 million.

[…] “The goal is simple – peaceful unification,” said a person with ties to the Chinese leadership in Beijing. Soft power, not armed force, is the strategy. “To attack the heart is the best. To attack a [walled] city is the worst,” the source said, quoting Sun Tzu’s “Art of War.”

[…] “What the United Front is doing to Taiwan now is the same as what it has been doing in Hong Kong since the 1980s – a quiet, slow but extensive penetration,” said Sonny Lo, a professor at the Hong Kong Institute of Education and author of a book on China’s covert control of the city. [Source]

Official reactions from Taiwan are mixed, with a Mainland Affairs Council spokesperson saying the activities should not be seen in an “overly negative way,” and a senior defense official describing the situation as “war.”