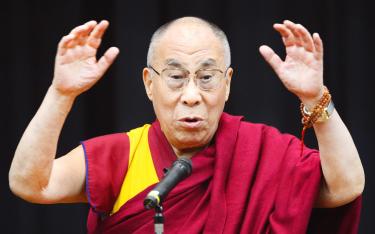 After Beijing quickly dismissed the Dalai Lama’s recent claims that he was in informal discussions with Beijing over a pilgrimage to China, the Tibet Autonomous Region’s top Party official has promised to “severely punish” Party members who support the exiled Tibetan spiritual leader. Reuters’ Sui-Lee Wee reports:

In a front-page article in the Tibet Daily, Tibet’s party chief Chen Quanguo said China would stamp out any separatist inclinations.

“As for cadres who harbor fantasies about the 14th Dalai Group, follow the Dalai Group, participate in supporting separatist infiltration sabotage activities, (they will be) strictly and severely punished according to the law and party disciplinary measures,” Chen was quoted as saying.

Chen’s denunciation of the Dalai Lama signals a hardening stance against the Nobel Peace Prize winner whom they label a “wolf in sheep’s clothing” who seeks to use violent methods to establish an independent Tibet. [Source]

Chen’s statement comes after a team from the Central Commission for Discipline Inspection, China’s anti-graft watchdog, finished inspections of several regions of China. On the opposite side of the country, inspectors warned Zhejiang officials against practicing religion. According to the Global Times, the head of the team probing Tibet declared that some officials have “failed to take a firm political stand” and demanded that the regional government “focus on neutralizing separatists.” Beijing continues to consider the Dalai Lama a “separatist,” though he claims his only call is for greater autonomy and ethnic coexistence in Tibetan regions of China.