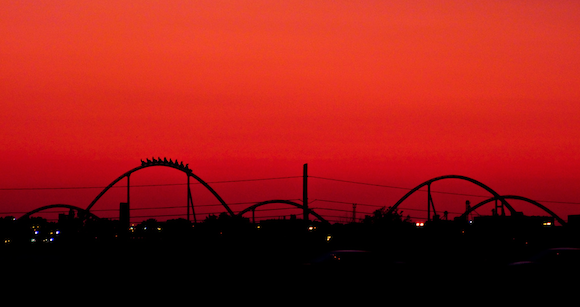 This roller coaster ride of official discourse is not without its reasons. Some friends of mine who observe political events in China will say that the Chinese Communist Party doesn’t match its words with deeds and so there’s no sense in paying attention to the way it deploys language. But I believe we can, if we observe China’s political discourse carefully, glimpse the drift, collision and upheaval of the tectonic plates of Chinese politics.

[…] For the time being, we can say that “ruling the nation in accord with the constitution” and “governing in accord with the constitution” have crawled out from the valley of the past almost two years. However, they have yet to become widely accepted “hot words” (热词) within the broader discourse sphere. Their longer-term survival and development is far from certain.

[…] It seems, therefore, that the real “hot term” during the 4th Plenum was “ruling the nation in accord with the law” – leaving the constitution out in the cold. [Source]

Despite widespread skepticism about the Party’s inclination to let either constitution or law restrict it, some encouraging prospects have arisen from both the Plenum itself and elsewhere. The Supreme People’s Court, for example, is reportedly preparing new guidelines on excluding evidence obtained through illegal means. This includes confessions extracted through torture, which have been instrumental in a string of wrongful convictions. Views of their likely effectiveness, however, are mixed. From Mimi Lau at South China Morning Post:

The Supreme People’s Court issued guidelines in 2010 on excluding illegally obtained evidence but there has not been any reported instance of such evidence being excluded from trial. The process drew criticism because it required defendants to provide evidence of torture. The new rules are an attempt to clarify court procedure.

[…] Dr Xu Xin, a law professor at Beijing Institute of Technology, said he doubted the new guidelines would be effective because none of the previous measures to curb such procedural problems had worked.

Si Weijiang, a leading criminal lawyer, was also sceptical. “The judicial system needs a structural reform that raises its jurisdiction above … the police and the procuratorate or else it would continue to be a lame duck [unable] to hold police accountable for procedural irregularities,” Si said. [Source]

Global Times’ Hu Qingyun reported this week on efforts by the National People’s Congress to channel grievances currently expressed through petitioning into the legal system. Abuses by local authorities trying to prevent petitioners’ complaints from reaching the central government have been a longstanding problem in China, which Beijing has repeatedly pledged to address. Again, though, new reforms may not be enough:

Members of the Standing Committee of the National People’s Congress (NPC) passed the amendment at the end of their week-long legislative session, saying it would make it easier for citizens to take the government to court.

Courts can also launch cases if the government is sued for violating agreements related to land or demolition compensation and commercial operations supervised by the government, according to the amendment.

[…] The difficulties in filing a court case against the government has led many people to petition the government instead, said Wang Cailiang, a Beijing-based lawyer who frequently represents people suing the government.

“With the revised law, there will be a rapid increase of actionable cases against governments. But I doubt whether the courts are ready to handle them,” Wang said. [Source]