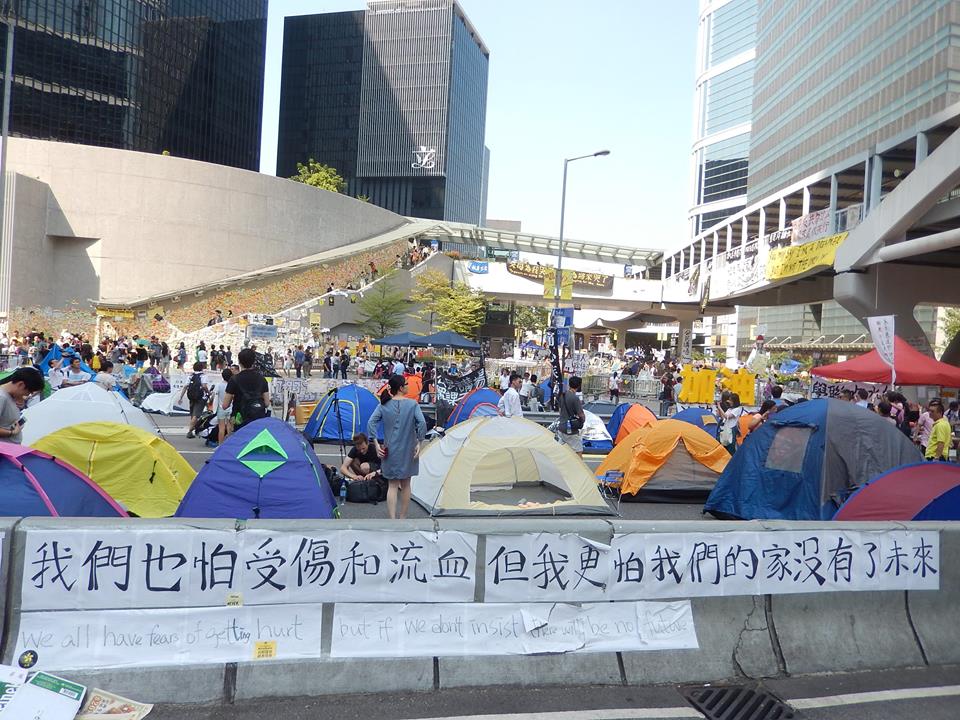 Six weeks after protesters took to the streets in Hong Kong to demand full universal suffrage in the election of chief executive, many of their encampments remain. Despite government efforts to clear some areas, and one round of meetings between student leaders and government representatives, many of the protesters have vowed to continue until their demands are met. Protesters told Bong Miquiabas of Forbes that they were prepared to stay for the long haul:

Various protesters over the weekend told me that they have seen little from the government the past 40-plus days to persuade them to abandon their position. They uniformly believe the resentment the protests might generate and the challenges of living on the streets are worth the trouble. “We have nothing but our voice and we must express it,” said William, 24, who has camped at Admiralty since September 28, when the first tear gas canisters were fired.

Like many who hold full-time jobs, William stays overnight to protest, going home only to shower and eat at least one hot meal daily. He works in the film industry and calls himself lucky in that both his family and employer support what he is doing, unlike many protesters who must conceal their activities or have seen their relationships suffer. With donations regularly streaming in to Admiralty, ranging from bottled water to bedding material, William sees no problem staying “as long as it takes.” [Source]

With Chief Executive C.Y. Leung in Beijing for the APEC meetings, his deputy Carrie Lam has indicated that authorities may make use of a new court injunction to clear the streets. Fiona Law and Isabella Steger report for the Wall Street Journal:

The trigger for the increasing pressure is a decision by Hong Kong’s High Court Monday to extend injunctions filed over two out of the three protest sites.

The court ruled that court bailiffs will be “authorized and directed to request the assistance of the police” in removing any obstacles blocking roads at the sites, which include the main protest area outside the city’s government headquarters in Admiralty and a site in the district of Mong Kok, the scene of some of the most violent confrontations of the past six weeks.

“Police will provide assistance to the bailiffs upon their request after the relevant parties have completed the related procedures,” said a police spokesperson in an emailed statement.

Gary Fong, a member of the Hong Kong Federation of Students, a leading protest group, said: “We are still figuring out what to do when they come to clear the sites. But we will definitely fight alongside protesters if they don’t want to leave.” [Source]

Along with clearing the streets, police would have the authority to arrest protesters, Chris Lau, Julie Chu and Clifford Lo report for the South China Morning Post:

The Department of Justice said yesterday that while the police would provide assistance in respect of the enforcement of the injunction orders, the Secretary for Justice might also “consider taking appropriate action against persons who may have committed the offence of criminal contempt”.

In his judgment yesterday, Mr Justice Thomas Au Hing-cheung extended the orders and said officers could remove or arrest people who ignored or insisted on breaching them.

They must, however, offer a brief explanation of the order at the point of arrest, Au wrote. [Source]

“To those who are unlawfully occupying the roads, we call for you to leave the areas quickly and peacefully,” said Carrie Lam, acting leader while chief executive Leung Chun-ying attends the Asia Pacific Economic Cooperation (APEC) summit in Beijing.

“As the place where the whole movement began, Admiralty is likely to be the last area to be cleared because people will come out again real quick if the police touch the nerve of the movement,” Matthew Ng, 21, said from his tent in the district next to government buildings.

Many protesters said they would simply regroup if police moved in. [Source]

In a meeting with Leung in Beijing during APEC, President Xi Jinping offered his government’s indirect support for plans to clear the streets while also focusing attention on economic issues by giving a green light to a link between the Hong Kong and Shanghai stock exchanges. Kathy Chu reports in the Wall Street Journal:

Mr. Xi said the Chinese government also “fully affirms and supports” the Hong Kong government’s efforts to maintain social order and safeguard the rule of law, which is a foundation for Hong Kong’s stability, according to Xinhua.

The timing of the remarks sends a “clear signal” that Beijing wants Mr. Leung to clear the protest sites as soon as the economic forum ends, said Jean-Pierre Cabestan, a political-science professor at Hong Kong Baptist University. [Source]

Meanwhile, also at APEC, President Obama also spoke publicly for the first time about the Hong Kong protests. From Josh Gerstein at Politico:

“Our primary message has been to make sure that violence is avoided as the people of Hong Kong try to sort through what the next phase is of their relationship to the mainland,” Obama said in response to a question during a meeting with Australian Prime Minister Tony Abbott at the U.S. Embassy here. It was the first time he’s publicly spoken on the issue.

“I think it would be unrealistic to expect that we set those concerns aside,” he continued. “People have aspirations for freedom and dignity in countries all around the globe.” [Source]

While the numbers have declined in recent weeks, protesters still have a notable presence, especially in Admiralty, which just marked the 45th consecutive night of demonstrations:

#OccupyHK Admiralty.
Headed to Mongkok now, where many take for granted police will attempt to clear this wk pic.twitter.com/0iid3Z9DMT

Posters showing the eyes of #OccupyCentral protesters are displayed in the Admiralty District of #HongKong ! #China pic.twitter.com/rg3FivqxVd

It's been exactly 43 days since the occupation of Mong Kok began — and the campers continue to build. #OccupyCentral pic.twitter.com/n88nAQvjBB

Read more about the Hong Kong protests, via CDT.