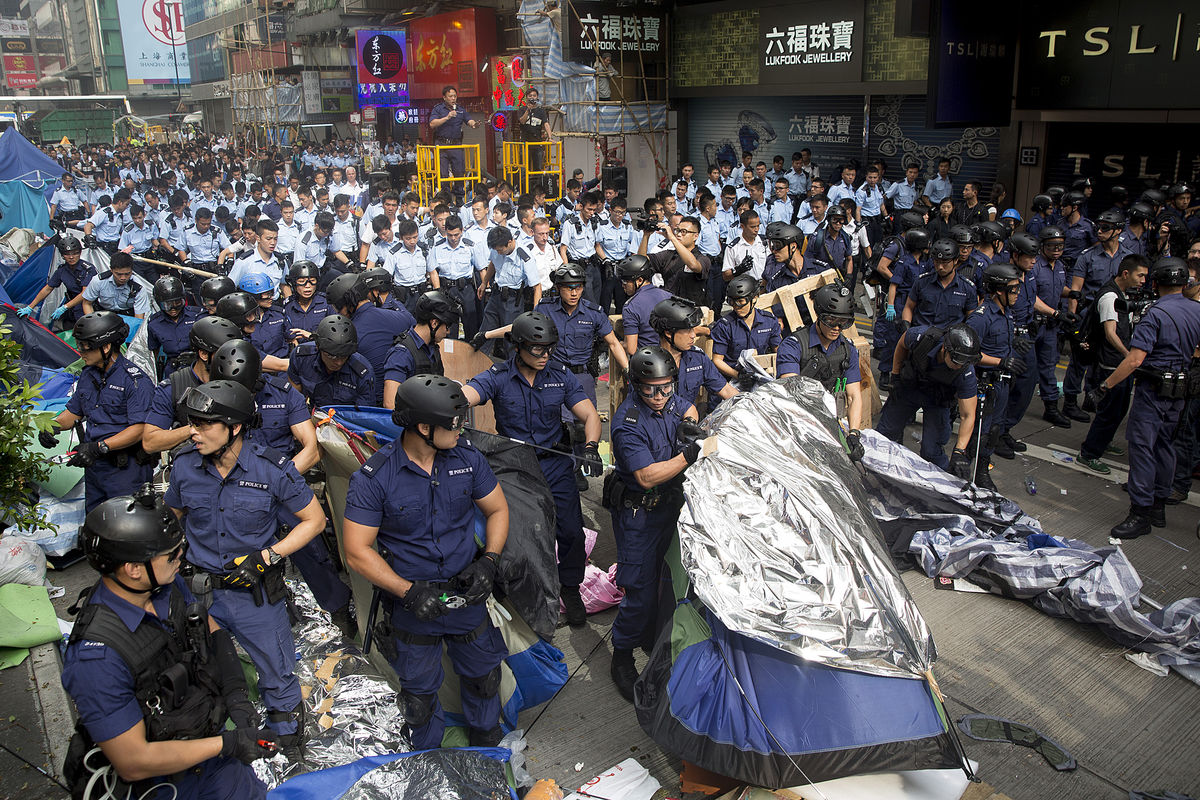 Student leaders Lester Shum and Joshua Wong were among the 116 people detained Tuesday night and Wednesday morning as police cleared protest sites in Mong Kok. Skirmishes between police and protesters broke out when a group of protesters refused to leave the site after the majority acquiesced to police demands. Farah Master and James Pomfret report for Reuters:

“You can’t defeat the protesters’ hearts!” screamed Liu Yuk-lin, a 52-year-old protester in a hard hat holding a yellow umbrella, the symbol of the movement, as she stood before lines of police in helmets and goggles.

But there was no serious violence, and after about three hours the operation was complete and traffic was flowing through as area where demonstrators had camped out since late September to call for greater democracy in the former British colony.

[…] A Reuters witness saw police take away Shum, and the Facebook page of the student group Scholarism announced that Wong had been arrested for contempt of court.

Although the protests have had no formal leadership structure, Wong and Shum were part of a group of students who many looked to as the movement’s de facto leaders. [Source]

Chris Buckley and Alan Wong at the New York Times report that by Wednesday morning police had cleared the site, following a night of clashes and forcible dismantling of the protesters’ camps:

The police removed, for now at least, a protest camp that had attracted many of the pro-democracy movement’s most combative voices. By noon, dozens of protesters watched quietly as officers dismantled the barricades that had protected the camp.

Early on Wednesday morning, lines of officers gathered in the neighborhood of Mong Kok and, after clashes with foot-dragging protesters, moved remorselessly down Nathan Road, clearing the street camp that had been established there since late September.

The previous night, however, the protesters had forced the police back, and officers had used batons and pepper spray to subdue the thousands of protesters who surged in, trying to defend their base in Mong Kok, a crammed, neon-lit shopping and entertainment district. [Source]

With the sites now mostly cleared and traffic back on the roads, the protesters have limited options of how to continue pressing their demands for universal suffrage, Cathy Chan and Frederick Balfour report for Bloomberg:

Protesters’ options are shrinking as the police enforce court orders, public support wanes and China refuses to give in to their demands that it allow a free election for the city’s leadership in 2017. An earlier attempt to secure streets in Mong Kok, a densely populated working-class district, failed after demonstrators came back, and the police have vowed to keep roads open this time, setting the stage for clashes this evening when crowds typically swell.

[…] “People are angry and confused,” Winnie Wong, a 21-year-old student, said at the site. “There are just the police, with violence to arrest and frighten people.”

Wong, who went to Mong Kok with friends last night after having been at the Admiralty protest site, said there was confusion about what to do next “We will just stay and wait to see what is the next move,” she said. [Source]

Cars pass through this stretch of Nathan Road for the first time in months #OccupyHK #Mongkok #UmbrellaMovement pic.twitter.com/x9QqNo0wyf

Read more about the Hong Kong protests via CDT.