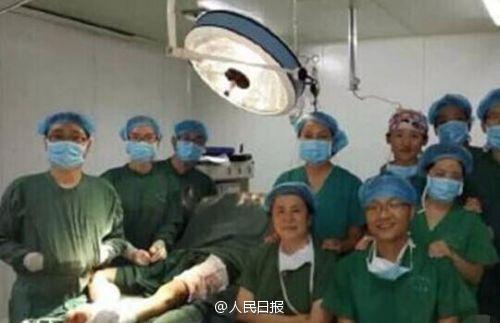 Take care to control negative commentary on the news of “doctors taking a selfie at the operating table.” Do not excessively hype content on doctor-patient relations. (December 23, 2014) A photo of surgeons posing around an anesthetized patient on the operating table made the rounds on Weibo on December 21. The photo was taken at a private hospital in Xi’an this August to commemorate the final surgery in that operating theater. Using the hashtag “operating table selfie” (#手术台拍照#), Weibo users shared mixed reactions, writes Ryan Kilpatrick at That’s Online:

Besides outrage over the apparent flippancy shown toward a matter of life and death and a lack of respect for the patient, hospital staff were also accused of disregarding hygiene regulations, pulling down their face masks to show off their beaming smiles.

[…] The doctors were not without their defenders, however. Many web users argued that it was touching how happy they were after a successful operations (“happier than the patient’s own family”) and that their essential and high-pressure jobs merited some down to let their hair down and relax, and we shouldn’t add to their stress. [Source]

The selfie has emerged during a period of distrust of the health care system. Frustrated patients have violently attacked doctors in the last few years.

Sonali Kohli and Gwynn Guilford at Quartz report that the photo was taken after the surgery team saved the patient’s maimed leg, which would have been amputated in many other hospitals.