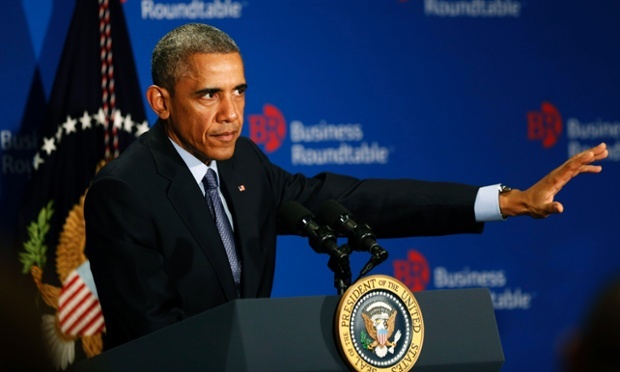 In an address and Q&A session at the Business Roundtable in Washington on Wednesday, President Barack Obama commented on the development of Sino-U.S. relations and used China as a key reference point for answers on other topics. He told gathered executives the United States wants to build a constructive win-win relationship with China, but expressed concern about human rights issues, growing nationalism, and commercial cybersecurity. From a transcript at WhiteHouse.gov:

On the geopolitics, my meeting with President Xi I thought was very productive and obviously we had some significant deliverables [including a pledge on carbon emissions and a bilateral visa agreement]. He has consolidated power faster and more comprehensively than probably anybody since I think Deng Xiaoping. And everybody has been impressed by his clout inside of China after only a year and a half or two years. There are dangers in that – on issues of human rights, on issues of clamping down on dissent. He taps into a nationalism that worries his neighbors and that we’ve seen manifest in these maritime disputes in the South China Sea as well as the Senkaku Islands.

On the other hand, I think they have a very strong interest in maintaining good relations with the United States. And my visit was a demonstration of their interest in managing this relationship effectively.

Our goal with China has been to say to them, we, too, want a constructive relationship. We’ve got an integrated world economy and the two largest economies in the world have to have an effective relationship together. It can be a win-win for both sides, but there are some things we need them to fix. And we are pressing them very hard on issues of cybersecurity and cyber theft, mostly in the commercial area. It is indisputable that they engage in it, and it is a problem. And we push them hard on it.

I do not take potential competition from China lightly, but I am absolutely confident we’ve got better cars than China does. And I’d much rather have our problems than China’s problems. That I’m confident about. On the other hand, the one thing I will say is that if they need to build some stuff, they can build it. And over time, that wears away our advantage competitively. It’s embarrassing – you drive down the roads, and you look at what they’re able to do. The place that we stayed at for the APEC Summit was this lavish conference center, and it probably put most of the conference centers here to shame. They built it in a year.

Now, you’ve got an authoritarian government that isn’t necessarily accountable. I understand we’re not going to do that. But if they’re able to build their ports, their airports, their smart grid, their air traffic control systems, their broadband systems with that rapidity and they’re highly superior to ours – over time, that’s going to be a problem for us. [Source]

The president also referred to China in defending U.S. environmental regulations, which one guest had described as part of “this regulatory burden that makes us all uncompetitive.”

I would just point to one simple example, and that is you would not want your kids growing up in Beijing right now, because they could not breathe. And the fact of the matter is that used to be true in Los Angeles – as recently as 1970. And the reason it changed was because of the Clean Air Act. And in my hometown of Chicago, the Chicago River caught fire right around the same period, and because of the Clean Water Act, you now have folks paddling down the water and fishing. And the commercial renaissance of downtown Chicago is, in large part, driven by a really big, radical piece of environmental legislation that, at the time, people said would destroy our businesses and our competitiveness.

So there’s an example of something that – it’s inconvenient, it’s tough, but it’s the right thing to do. And, over time, I actually think it’s not only good for our quality of life, it’s actually good for our economy. Because we’ve got some really innovative companies here and you guys figure out how to adapt to those regulations. [Source]

At The New York Times, Bree Feng interviewed Chip Jacobs, co-author of two books on pollution in Los Angeles and in China, about comparisons between the two:

Q. In Beijing recently, Mayor Garcetti recalled how public protests played a role in pressuring the government to tackle the issue. He also outlined steps the Los Angeles government took decades ago to fight pollution, including building a strong system to enforce pollution control and engaging the private sector and public to make sure the environmental progress was sustained. Do you think this also makes sense for Chinese cities?

A. Mayor Garcetti, who is roughly my age and grew up in the same dome of hydrocarbons and ozone and sunless summer days that I did, hit the nail right on the head. As we say in “Smogtown,” Los Angeles was the first smog beachhead in world history. There was no established science for air pollution control. Nobody had theorized much about “photochemical smog.” As a result, our first response to this terrible, gray-brown air was laughable. […]

Today, China is doing everything right environmentally and at a pace that far surpassed what Los Angeles did in its first decades of chronic air pollution. Whether it’s pushing for alternative energy — albeit too slowly, restricting driving — though more than 1,000 new cars enter Beijing’s streets each day, curtailing construction sites and heavy manufacturing on bad days, and, now, starting to release emission statistics, it’s incredibly impressive.

But what’s just as worrisome is the question of where the average Chinese can participate. This is where the public’s will to have a say in the return of blue skies and healthy air for their family mashes up against China’s form of government and resistance to shed too much daylight on its operations. We devote a sizable portion of our new book to grass-roots anger over this question. With no constitutional right of assembly, free speech, etc., and limited legal redress, what can someone do? [Source]