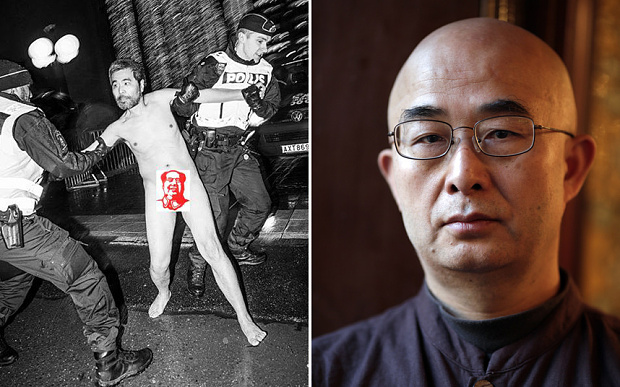 Liao Yiwu, who lives in Berlin, said Wednesday that he received notifications from Facebook that the company had temporarily blocked his ability to post updates to his page. Previous content on Mr. Liao’s page remained viewable.

The move came after he posted photos of an artist friend staging a nude protest.

“Facebook has a pretty simple policy with regard to nudity: we prohibit it. The individual in question repeatedly posted pictures containing nudity,” a spokeswoman said, pointing to the company’s policies.

The spokeswoman continued: “Any suggestion that we took action because of politics, philosophy or theoretical business interests is complete nonsense.”

Mr. Liao said he maintained that the images depicted a form of performance art and shouldn’t be regarded the same way that pornography might be.

“They don’t even provide an opportunity for me to defend myself or to debate the issue,” he said. “This is the equivalent of speech dictatorship. It’s infuriating.” […] [Source]

The suspension of Liao Yiwu’s Facebook page appears to have been lifted. Last week, Tibetan blogger and activist Woeser accused Facebook of censoring a post that included images of a recent Tibetan self-immolation. Recently, Facebook founder Mark Zuckerberg was accused of pandering to Chinese authorities in hopes of allowing the social media giant entry into China.

At The Telegraph, Robert Foyle Hunwick notes that the image Liao shared, of artist Meng Huang streaking in support of jailed Nobel Peace Prize laureate Liu Xiaobo, had the likeness of Mao Zedong superimposed over the artist’s groin—an indication that members of China’s infamous “Fifty Cent Party” may have been responsible for flagging the content:

Liao Yiwu, whose works include The Corpse Walker and Interviews with People from the Bottom Rung of Society, had posted images of artist Meng Huang streaking at an annual demonstration in support of the jailed Nobel Peace Prize laureate Liu Xiaobo, but had covered Meng’s groin with an image of Mao Zedong to avoid breaching Facebook’s community rules. Ironically, such an image would be considered even more offensive to Chinese authorities, who strictly control the use of Mao’s image.

[…] “Any suggestion that we took action because of politics, philosophy or theoretical business interests is complete nonsense,” the company [Facebook] said.

A more likely explanation is that China’s legions of pro-government wumaoding – or 50-cent army – are exploiting Facebook’s complaints system to target users who post critical or controversial content about China. Both Mr Woeser and Mr Liao said they had had no difficulties with the site until this week. [Source]