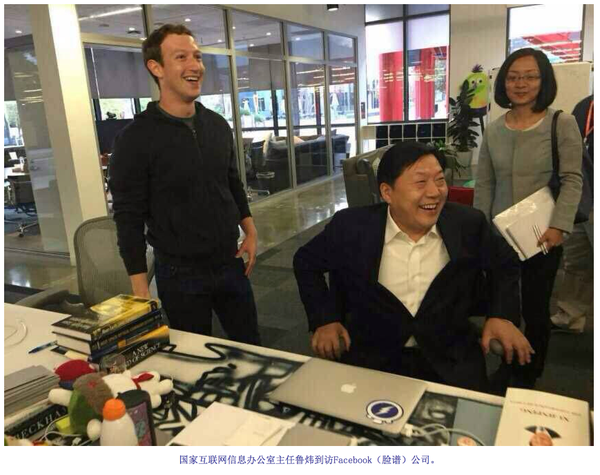 In October, China’s “Cyberspace Minister” Lu Wei warned foreign Internet companies that the country is entitled to “choose who can come to our home and be our guest.” “What we cannot permit,” he had previously warned, “is the taking advantage of China’s market, of profiting from Chinese money, but doing damage to China. This will absolutely not be permitted [….] Assuming respect for this bottom line any internet company is welcome in China.”

Following his recent Mandarin performance in Beijing, Facebook’s Mark Zuckerberg welcomed Lu into his corporate home in the evident hope of earning a return invitation. A copy of Xi Jinping’s The Governance of China sat on Zuckerberg’s desk during the visit, prompting grins from Lu but less enthusiasm elsewhere. From The Telegraph’s Tom Phillips:

“I’ve also bought copies of this book for my colleagues,” Mr Zuckerberg told his visitor of the president’s book, according to The Paper, a government-run news website. “I want them to understand socialism with Chinese characteristics”.

[…] “Zuckerberg is an internet genius, the founder of the Facebook empire. Yet his understanding of Chinese politics is like that of a three-year-old not a 30-year-old,” said Mr Hu, a Beijing-based activist who has been repeatedly placed under house arrest for criticising the Communist Party.

“He is like a Red Guard waving the White Book now,” added Mr Hu. “He knows nothing about Xi, nothing about China, even though he is studying Chinese.

[…] Zhang Ming, a political scientist from Beijing’s Renmin University, said the timing of Mr Zuckerberg’s remarks was unfortunate, coming in the midst of a major crackdown on government opponents that has seen academics, activists and human rights lawyers jailed. [Source]

In a separate piece, Phillips focused on the book itself, and its place in the vigorous campaign of personal image-crafting focused on its author.

Zuckerberg’s comments seemed so brazen an effort to curry favor that some questioned their authenticity. On Twitter, Global Times editor James Palmer noted the frequent appearance of “invented/wildly mistranslated quotes” from foreigners in state media. But “the interaction was confirmed by a person close to the traveling group,” according to The New York Times, while the AP reported that the conversation was held in Mandarin.

The news quickly spawned a Twitter mini-meme, among other feats of creativity:

I keep a Xi beside me when I'm working. pic.twitter.com/tpUrpJCQBt

I don't always read Xi's book, but when I do, I read it in French, just as nonsensical but sounds nicer pic.twitter.com/9YwZ5eFqiH

Lu was also shown meeting with Amazon’s Jeff Bezos and Apple’s Tim Cook, whom he admonished about respect for Chinese users’ security and privacy while receiving a sneak preview of the forthcoming Apple Watch [Chinese]. The New York Times’ Paul Mozur reported that Lu’s talk of “win-win cooperation instead of zero-sum games” was less warmly received on the East Coast:

The visit to Facebook was part of a whirlwind tour in the United States for Mr. Lu, a trip that offered the contrast of coasts. In Washington, Mr. Lu faced strong criticism from American officials over Chinese hacking attacks and skepticism about his vision for Internet governance.

[…] During Mr. Lu’s visit in Washington, he met with members of the National Security Council, who criticized continuing hackings against American companies and China’s top-down, government-led approach to managing the Internet, according to a senior American administration official who spoke on the condition that he not be named because the meetings were confidential.

[…] Meeting with United States technology companies provided Mr. Lu with ample photo opportunities to show off back home. It also demonstrated that he could easily find eager partners in Silicon Valley, even as officials in Washington seek to play hardball. [Source]

Bloomberg reported last week on the presence of eager partners in another major West Coast industry, quoting UCLA’s Tom Nunan: “Every mainstream [Hollywood] studio is keenly aware of not offending the Chinese market, because it’s become such an important revenue stream.”

Despite the best efforts of anti-censorship activists and netizen bloggers to develop tactics to evade onerous limits on free speech online, the Great Firewall has held up overall. […]

[…] However, this control only holds so long as China’s authorities continue to be able to convince Chinese companies—the middleman content providers and web platforms—that it is in their interests to censor and police on behalf of the government. Forcing Baidu or Tencent to police netizens in China may be one thing—but will they do the same in the U.S. when users can easily reject their services and find better alternatives? And their censoring Chinese citizens may even come up for debate if company share prices on global exchanges fall due to users abandoning their services—as Sina Weibo acknowledges may happen in their SEC filing.

[…] Not to get all Free Market Champion here, but I think Chinese Internet companies will decide at some point that pushing back on the government’s demands that they self-censor is in the best, selfish interest of their bottom line. If the CCP is taking the long view, it may be in theirs as well. [Source]

But for now, according to Freedom House’s annual Freedom on the Net report, released last week, China’s internet controls are intensifying while its global influence grows. China placed third from last in the rankings, though several countries such as North Korea were not included. From Vauhini Vara at The New Yorker:

China’s place in the rankings won’t come as a surprise to many people. The notable part is that the report suggests that, when it comes to Internet freedom, the rest of the world is gradually becoming more like China and less like Iceland. The researchers found that Internet freedom declined in thirty-six of the sixty-five countries they studied, continuing a trajectory they have noticed since they began publishing the reports in 2010.

[Madeline] Earp, who wrote the China section, said that authoritarian regimes might even be explicitly looking at China as a model in policing Internet communication. (Last year, she co-authored a report on the topic for the Committee to Protect Journalists.) China isn’t alone in its influence, of course. The report’s authors even said that some countries are using the U.S. National Security Agency’s widespread surveillance, which came to light following disclosures by the whistle-blower Edward Snowden, “as an excuse to augment their own monitoring capabilities.” Often, the surveillance comes with little or no oversight, they said, and is directed at human-rights activists and political opponents. [Source]