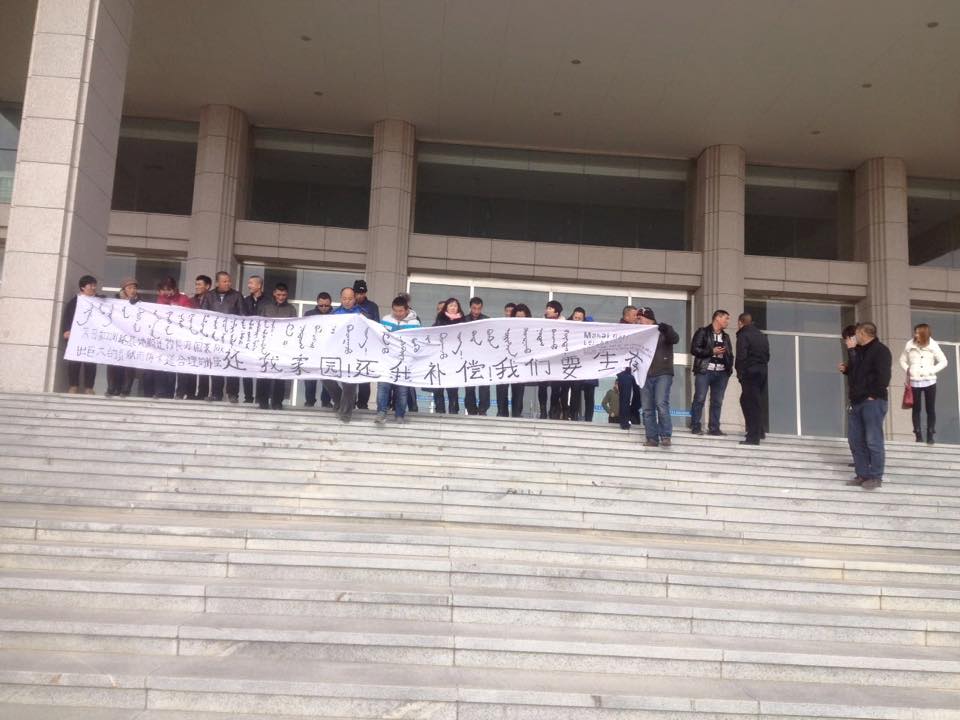 In recent weeks, ethnic Mongolian herders have staged protests in various cities in Inner Mongolia against the government takeover of traditional grazing lands. According to the Southern Mongolian Human Rights Information Center, more than 60 herders gathered in front of local government offices in Shiliin-hot City on January 20; close to 100 riot police and security officers responded:

In Hohot on January 26, about 300 herders gathered in front of government offices in Hohhot City, according to SMHRIC:

Last week, Tumur, a 45-year-old herder, hanged himself outside the the Sum Government building in Inner Mongolia. Sui-Lee Wee reports for Reuters:

One of Tumur’s relatives, reached by telephone, confirmed his death to Reuters but declined to provide further details.

“A lot of people in the villages, including his relatives, have been warned not to reveal information about this (Tumur’s death),” Enghebatu Togochog of SMHRIC told Reuters.

[…] Tumur had been petitioning the local government for years for the return of his grazing land, illegally occupied during an initiative to “help the poor”, the SMHRIC said.

Ethnic Mongolian activist Hada was released from prison in December after serving 18 years for “separatism” and “spying,” but he has continued to speak out on behalf of the protesting herders. After giving an interview to Radio Free Asia, Hada had his ID card confiscated. RFA reports:

[..P]olice told him they would only take care of his income and accommodation if he stopped speaking to foreign journalists and promised not to sue the authorities over his treatment, which he has refused to do.

“As everyone knows, a person without an ID card is extremely limited in what they can do,” Hada’s wife Xinna said. “They can’t go out, can’t buy train tickets, can’t buy a SIM card for a cell phone, and can’t get an ATM card or credit card.”

“Our household bank accounts are all frozen right now, and we’d hoped to set up another one using Hada’s ID card,” she said.

“Hada may have got out of detention, but he’s still not free.” [Source]

Protests broke out in Inner Mongolia in 2011 when a Han truck driver struck and killed a herder. The driver was later executed.