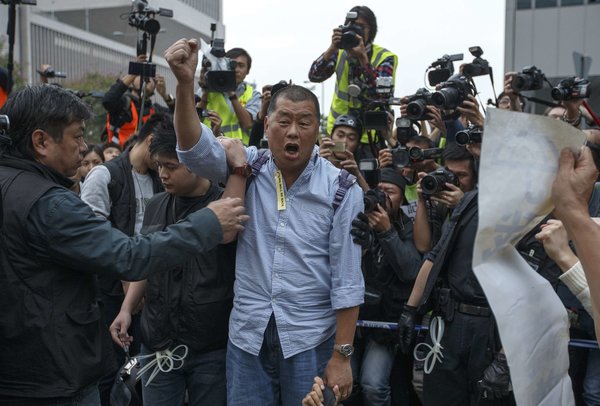 A staunch advocate for democracy in Hong Kong, Next Media tycoon Jimmy Lai has been targeted in recent months—both with a graft probe and with detention following his participation in the two-month protest movement in Hong Kong. On Monday, assailants threw gas bombs at both the Next Media offices and Jimmy Lai’s home. No injuries were reported. From Isabella Steger and Fiona Law at the Wall Street Journal:

The attacks aren’t the first against Mr. Lai, whose outspokenness against Beijing has made him the target of violence in the past. One year ago, assailants drove a car into the front gate of his home and left an ax and machete on the driveway. During the recent Occupy protests in Hong Kong, pro-Beijing groups frequently demonstrated outside Apple Daily’s headquarters and printing plant to delay the distribution of newspapers. Apple Daily is the flagship newspaper of Next Media, which Mr. Lai founded, and is one of the top-selling newspapers in Hong Kong and Taiwan.

“I am fine. I am not scared,” Mr. Lai told The Wall Street Journal on Monday. “These things always happen. They are only provocations. I’m not bothered by them anymore.” [Source]

For the New York Times, Neil Gough profiles Lai and his journey from Guangzhou to Hong Kong, where he has built a media empire with Apple Daily and become one of the territory’s most outspoken democracy advocates:

But if the protests that brought swaths of Hong Kong to a standstill throughout the autumn were partly a culmination of his decades of promoting democracy, Mr. Lai, 66, finds perhaps his greatest test in their aftermath — one that could have repercussions for media freedom in Hong Kong and Beijing’s growing intolerance of dissent in what was a British colony until 1997.

It is the kind of political street fight he has been waiting for. On the afternoon of Sept. 28, Mr. Lai was hit with fragments from a tear-gas canister — one of 87 that riot police fired that day into the crowds of protesters, mainly young students.

[…] Now, Mr. Lai’s fight looks set to shift from the streets to the courts. Outraged by what has been branded at best an illegal assembly and at worst an affront to China’s sovereignty over the territory, the authorities in Hong Kong have been preparing formal charges against scores of people they have identified as the main figures in the Occupy protests. On Friday, Mr. Lai was instructed to report to police headquarters on Jan. 21.

“It’s going to be very interesting to see whether he is going to bear the heaviest weight as the blackest ‘black hand,’ ” said Michael DeGolyer, a professor of political economy at Hong Kong Baptist University, who runs a series of polls on democracy. [Source]

The New York Times article is accompanied by a Q&A with Lai about the Hong Kong protest movement. Read more about Jimmy Lai and Hong Kong media, via CDT.