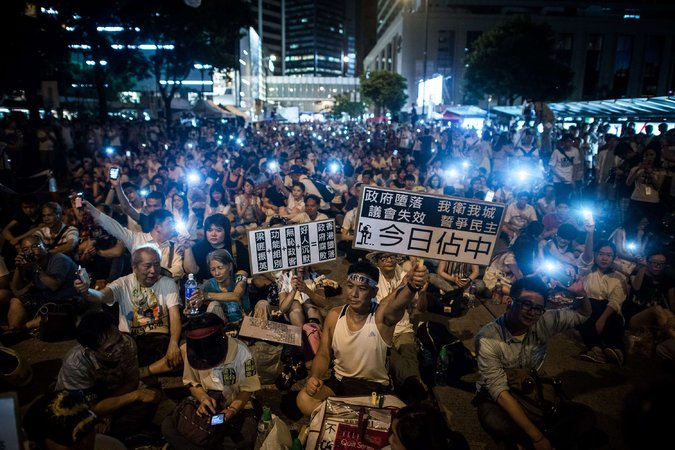 Concerns over the allowance of universal suffrage in upcoming Hong Kong elections have put tensions between Beijing and the semi-autonomous region on display in recent months. Longstanding concerns from the pro-democracy camp were heightened in June after the State Council Information Office released a white paper asserting “complete jurisdiction” over Hong Kong, and suggesting that a “basic political requirement” for the city’s judiciary was a “love for China.” Since then, pro-Beijing and pro-democracy camps have been staging protest rallies and circulating petitions that reflect their competing visions of Hong Kong’s future.

As Hong Kong waits anxiously for Beijing to announce a proposal on rules for the 2017 election of chief executive, the New York Times reports that top Hong Kong adviser Wang Zhemin delivered a speech in Hong Kong aimed at soothing lingering concerns among both of Hong Kong’s ideological camps:

Speaking in Hong Kong on Thursday, Wang Zhenmin, dean of the law school at Tsinghua University in Beijing, who advises the central government on Hong Kong issues, said “no democracy in the world” was perfect.

[…] Mr. Wang, who visited Hong Kong under the auspices of the Ministry of Foreign Affairs to make its case for the new rules, also assured Hong Kong residents that contrary to published reports, the territory’s independent courts would be respected and flourish in coming years, as China itself moved toward a more rules-based system. He said reports that judges would be subject to a political requirement of “loving the country” were the result of mistranslations of a Chinese white paper.

[…] In an unusual theoretical leap for a state that is still at least nominally socialist, Mr. Wang suggested one reason to keep control of the nomination process was to protect the interests of its capitalist class. […] [Source]

Hong Kong anti-corruption police on Thursday searched the homes of a media magnate who is an outspoken critic of Beijing and a pro-democracy legislator after receiving a complaint alleging that lawmakers had taken bribes.

The timing raised eyebrows because it comes days before a key decision by Beijing on direct elections for the leader of Hong Kong, a special administrative region of China. It also comes a month after a trove of documents was leaked to competing news outlets detailing big donations by Lai to local pro-democracy political parties and politicians, including Lee.

[…] Lai told reporters camped outside his home in an upscale neighborhood that “ICAC was here.”

“They’ve all gone now and there is no further comment,” he said.

The New York Times has more on the reasoning behind the ICAC’s raids:

In a public statement issued Thursday evening, the Independent Commission Against Corruption said that four premises had been searched during the day after the agency obtained warrants from the Court of First Instance. The investigation began after the agency received notices that alleged some legislators had violated an antibribery law, the statement said, although it did not name the parties involved.

[…] It was not known which of Mr. Lai’s donations was under investigation. Hong Kong has no laws specifically requiring the disclosure of donations to political parties, but some legislators alleged to have received donations from Mr. Lai did not declare them as the legislature’s rules would require.

[…] Mr. Lee, the legislator, said that the search of his office and apartment was prompted by Mr. Lai’s donation and about remarks that Mr. Lee made during a legislative debate on press freedom in January, in which he mentioned the withdrawal of ads from Apple Daily. [Source]

The central government is currently holding meetings in Beijing on the 2017 election of Hong Kong’s chief executive; their proposals are expected to be announced on Sunday, and pro-democracy activists are planning a rally to follow. For more on the political situation in Hong Kong, see commentary on the region’s uneasy resource dependence on the mainland from Tea Leaf Nation; or on contradicting definitions of patriotism in Hong Kong and Beijing from the South China Morning Post. Also see prior CDT coverage of Hong Kong democracy.