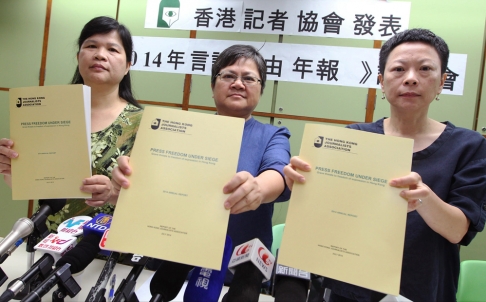 Tensions between Hong Kong and mainland China – on both the civic and political levels – have been growing over the past year, as Hong Kong residents express increasing frustration with setbacks in political and social freedoms in the territory. The Hong Kong Journalists Association recently issued a report stating that the past year had been, “the darkest for press freedom for several decades.” The report cites a number of incidents, including the brutal knife attack on Ming Pao editor Kevin Lau Chun-to. From Lo Wei at the South China Morning Post:

A meat cleaver attack on the former Ming Pao chief editor Kevin Lau Chun-to, the sacking of Commercial Radio talk-show host Li Wei-ling, and advertising boycotts against newspapers such as Apple Daily and am730 were all cited by Sham as troubling incidents over the past year.

Police had also obstructed journalists from covering arrests at the July 2 sit-in in Central, and told them to leave.

[…] The report found self-censorship was also a problem. The association announced it was setting up a monitoring committee, made up of eight journalists, academics and lawyers, to investigate self-censorship complaints. [Source]

The reports notes interference in reporting on the July 1-2 protests, which drew thousands of people calling for democratic reforms to the 2017 election for chief executive. Weiboscope found that the July protest was more severely censored on Weibo than the 25th anniversary of June 4th, which was one of the most censored events in recent history. Chris Luo at the South China Morning Post reports:

An average of over 70 out of every 10,000 Weibo posts made on the anniversary of Hong Kong’s handover were deleted by the government in Beijing, according to Weiboscope, a University of Hong Kong media project that tracks censorship on the popular social media platform.

The ratio of censored postings – over twice as many as that on an average day – also surpassed that of 64.5 posts out of each 10,000 made on June 4 this year, the anniversary of the Communist Party’s violent Tiananmen Square crackdown in 1989.

June 4 is usually the busiest day for national censors to suppress comments bloggers posted on the incident on social media such as Weibo.

Professor Fu King-wa, who administers the HKU media project, said 2,006 posts were taken down by the authorities out of some 282,000 posts Weiboscope tracked on that day. The study is based on a sample of 51,232 selected Chinese microbloggers who have more than 1,000 followers or whose posts are frequently censored. [Source]

At the same time, official media outlets have been promoting the government line on the protests. The People’s Daily issued three editorials in one week condemning the protests. From Li Jing at SCMP:

A front-page editorial called it “completely groundless” to believe that the recently published white paper – which had stirred controversy and triggered protests in Hong Kong – went against the central government’s “one country, two systems” policy.

It also said it was groundless to worry that Beijing would “narrow down” Hong Kong’s autonomy. [Source]

While contesting the demands of the protesters, state media did acknowledge the detention of more than 500 participants, according to Austin Ramzy at the New York Times:

Many mainland Chinese news media outlets carried a short report from the state-run Xinhua news agency saying that about 500 demonstrators had been arrested, but did not say why they had been protesting.

In a commentary on Thursday headlined “Hong Kong Police Did the Right Thing to Arrest 511 Protesters,” the Global Times, a Communist Party-run newspaper, warned that Hong Kong could experience unrest like that seen in Thailand or Ukraine. [Source]

Read more about the recent Hong Kong protests as well as the media in Hong Kong.