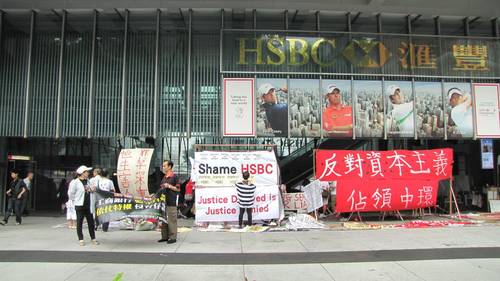 Mark C. Eades at The Jamestown Foundation reports that tensions between Mainland China and Hong Kong are “higher than ever” nearly seventeen years after the British handover:

This state of affairs has not only pitted Hong Kongers against Beijing, but also the pro-democracy majority in Hong Kong against a vocal and influential pro-Beijing minority, including pro-Beijing leaders in the Hong Kong government and business community. The United States has also given vocal support to Hong Kong democracy, sparking accusations from Beijing and its allies in Hong Kong of U.S. interference in China’s internal affairs, and conspiracy theories alleging U.S. plots to divide and weaken China.

[…] The “pro-Beijing camp” includes current chief executive C.Y. Leung and the pro-Beijing majority in LegCo—including the Democratic Alliance for the Betterment and Progress of Hong Kong (DAB) party, which holds the largest number of seats and has close ties to the Chinese Communist Party. Leung’s ties to Beijing are so close as to have drawn criticism even from DAB leadership (SCMP, October 15, 2012). This camp also includes a number of pro-Beijing newspapers (see below) and grassroots or “astroturf” pro-Beijing groups, which appear to have strong mainland ties. Among the latter are the Hong Kong Youth Care Association and Caring Hong Kong Power, which are noted for inflammatory rhetoric and have been accused of “Cultural Revolution tactics” including violent attacks on their political opponents (See Apple Daily, August 12, 2013; Epoch Times, December 19, 2012; SCMP, April 27 and June 13, 2013; Taipei Times, September 9, 2013).

Pro-Beijing parties currently hold a sizeable majority in LegCo. This legislature has limited powers vis-à-vis the chief executive. Seats are split between geographical constituencies directly elected through universal suffrage, and functional constituencies elected by designated members of Hong Kong’s business community. Functional constituencies enable pro-Beijing parties to hold a majority of seats without winning the majority of popular votes in LegCo elections. As in mainland China, Beijing’s pro-business but anti-democratic policies seem popular among the rich and powerful in Hong Kong, many of whom also have mainland interests. An aim of pan-democrats, along with public nomination and universal suffrage in chief executive elections, is to abolish functional constituencies in favor of universal suffrage for all LegCo seats (See Civic Party, February 19, 2010; Congressional Research Service, September 14, 2012; SCMP, August 3, 2013 and February 6). [Source]