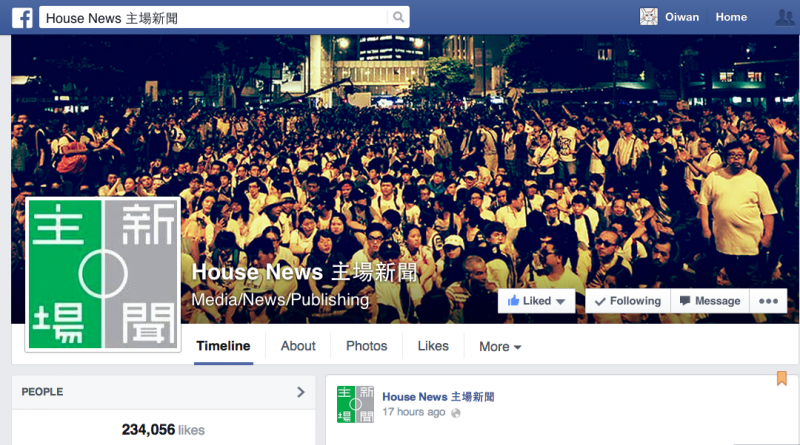 In a letter posted on the website’s front page, Tony Tsoi Tung-ho, said he and his family had been increasingly influenced by the spreading “white terror” in society, as a number of democracy advocates had been followed, had their past investigated and been smeared.

“As a businessman who frequently travels to and from the mainland, I have to admit that I felt very scared every time I crossed the border,” Tsoi said in the letter.

He is one of 10 professionals to have publicly vowed to take part in the civil-disobedience movement Occupy Central.

Leung said Tsoi had been paying almost HK$600,000 a month to keep the website running but they could never balance the books. “Despite our popularity, many big companies don’t place advertisements on our website because of our critical stance towards the government and Beijing,” he said. [Source]

Hong Kong has changed. To act as a normal citizen, a normal media outlet and to do something right for society is becoming difficult, or even terrifying — not that you feel alienated, but fearful. The ongoing political struggle makes people very anxious — many democrats are tracked and smeared. Their past records have been dug up. A sense of White Terror lingers in society and I feel the pressure as well. As a businessman who travels frequently to mainland China, I admit that every time I walk past the border, I am scared. Am I being paranoid? It is difficult to explain the feeling to outsiders.

My family feels the pressure and they are worried about me. As the atmosphere gets more tense, the pressure around me becomes more disturbing.

[…] At the beginning, we had a business model in mind. But in an abnormal society and market, the revenue generated from The House News advertising is not proportional to its impact. Our budget is not big, but since our launch, we never have had a balanced budget. The biggest problem is that in the near future, the atmosphere in Hong Kong will become more tense. We can’t see any hope from a business point of view. Some people asked me if any of our clients withdrew their ads. My answer is no. They never advertise on our site in the first place. Our core value has been twisted, and now the market is also twisted. [Source]

Mainland-Hong Kong tensions have recently been on the rise. Amid widespread worry that Beijing won’t allow universal suffrage in the 2017 election of Hong Kong’s Chief Executive, the State Council Information Office released a white paper in June asserting Beijing’s “complete jurisdiction” over the semi-autonomous region. When Occupy Central activists launched an unofficial referendum on electoral reform which attracted nearly 800,000 participants, Beijing ordered news of the campaign be deleted, and state-run media responded by declaring the poll illegal.

The Hong Kong Journalist’s Association recently released a report calling the past year in Hong Kong the “darkest for press freedom in several decades,” which mentioned police obstruction of journalists trying to cover protests, and brutal attacks on members of the Hong Kong press. Earlier in 2014, international press freedom advocacy groups the Committee to Protect Journalists and Reporters Without Borders both noted Beijing’s expanding influence on Hong Kong media by using economic clout to encourage self-censorship.