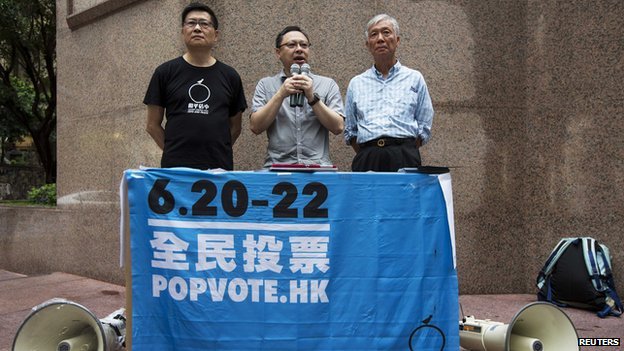 With organizers hoping for 100,000 participants in Hong Kong’s ten-day unofficial referendum on electoral reform, the number of votes surpassed 689,000 on Sunday June 22, despite what the New York Times described as “one of the most severe cyberattack of its kind ever seen” on the online voting platform [inaccessible a the time of this posting]. The referendum, organized by members of Hong Kong’s Occupy Central With Peace and Love movement, has met staunch opposition from Beijing. BBC’s China Media report rounds up state media attacks on the unofficial Hong Kong poll:

Media in China warn of “serious consequences” as hundreds of thousands vote in an unofficial pro-democracy referendum in Hong Kong.

[…] Describing the referendum as “illegal” and a “joke”, the Global Times’ Chinese edition admits that “it is not happy news for the mainland because there are many supporters of the voting”.

However, the state-run paper reminds the opposition groups to “get used to the fact” that Beijing will never compromise on sovereignty-related issues even when facing “pressure from the West”.

“Many of them have pathetic tunnel vision. They should look at the whole nation of 1.3 billion people, and remember how this country successfully controlled the British government under Margaret Thatcher to regain Hong Kong… The opposition groups should stop having the illusion of succeeding in this farce,” it says.

Echoing similar sentiments, an article in Haiwai Net describes the vote as “obviously ridiculous”, adding that it cannot be “legally binding”.  […] [Source]

“The Global Time[s] is a crap newspaper,” one blogger posted, adding, “How about you let the 1.3 billion [people in China] vote on a referendum?”

The sizable number of participants in the the poll so far may be related to negative public reaction to Beijing’s recently released “white paper” reasserting sovereignty over the semi-autonomous region.