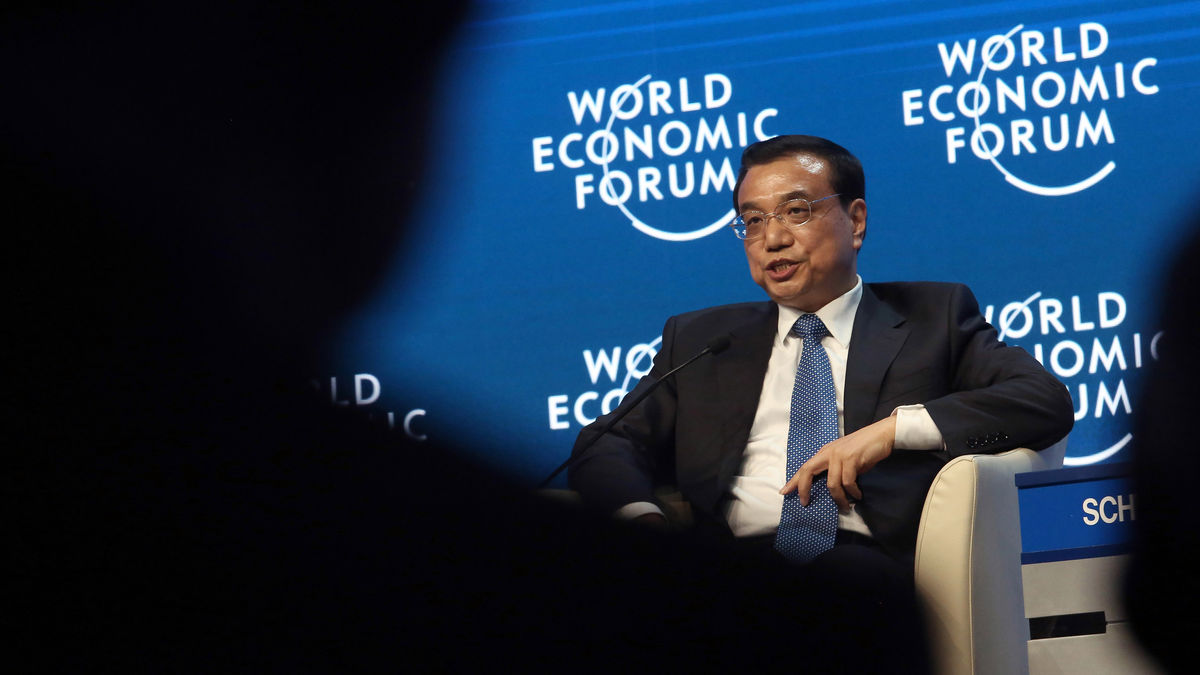 In his keynote address at the 2015 World Economic Forum in Davos, Switzerland, Chinese Premier Li Keqiang reassured investors and business leaders that China’s economic slowdown, which dropped to a growth rate of 7.4% for 2014, is not a cause for concern. At Bloomberg News, Malcolm Scott and James Mayger report:

While the economy will still face large downward pressures in 2015, China won’t have systemic financial risks and will seek to improve the quality of growth to ensure an “appropriate” pace of expansion, Li said Wednesday in a speech at the World Economic Forum in the Swiss ski town.

[…] For Li, the risks are under control.

“China has much room for urban, suburban and regional development, and domestic demand has huge potential,” he said. “China’s condition will continue to improve and China will bring more opportunities to the world if China’s economy keeps growing at medium to fast speed for 10 to 20 years.”

[…] Li reiterated that China will pursue a prudent monetary policy and proactive fiscal policy. Leaders are using effective methods to prevent potential risks in finance, and the nation’s savings ratio of as high as 50 percent provides “strong support” to growth, he said. [Source]

According to Li, the decline in China’s economic growth is part of broader structural reforms that the government is undertaking to transition the country to a new era of slower and steadier growth. From Larry Elliot at The Guardian:

“At present, China has entered the stage of the new normal, shifting from high speed to medium to high speed. That makes structural reform all the more necessary.”

[…] The slowdown is part of a deliberate strategy by Beijing to deal with the problems caused by the enormous stimulus programme introduced after the financial crisis of 2008, which saw credit expansion and large-scale investment in infrastructure.

Li said: “A financial crisis will not happen in China and China will not head for a hard landing. [Source]

Li’s confidence in the Chinese economy was echoed by Alibaba’s Jack Ma, who told business leaders at Davos that slower growth represents a positive shift in emphasis on the “quality” and not just the speed of economic growth. Nadia Damouni at Reuters reports:

[…] “It’s not consumption that would be driving the deceleration of the Chinese economy — to the extent that it’s decelerating, it’s more because of investment flowing down,” Luria said.

“It looks like the Chinese consumer is still strong and growing.” [Source]

As the first Chinese leader to attend the World Economic Forum since 2009, Li’s rare appearance at the meeting not only serves to allay fears about the global economy, but also promotes China’s own economic interests as the country prepares for its own “Summer Davos” to be held in September. Ansuya Harjani at CNBC reports:

[…W]ith China hosting its own “Summer Davos” held in September, top level contact is essential in order to ensure attendance by political and business leaders. The Summer Davos is held annually in either Tianjin or Dalian.

“China is more confident at home than outsiders realize. Chinese outbound capital flows are surging as it expands its FDI [foreign direct investment] portfolio across sectors and regions. Davos is perhaps the best one-stop shop for Chinese leaders to entertain potential investments,” he said.

[…] Also on the agenda will be securing funding for the Beijing-backed Asian Infrastructure Investment Bank (AIIB), which is set to begin operations later this year. “It needs to raise capital, if it is to work. Switzerland is a good place to do that, especially with most of the world’s top bankers at Davos,” said Chapman. [Source]