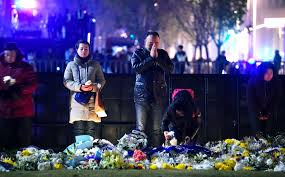 The stampede on New Year’s Eve which killed 36 people on Shanghai’s Bund has raised questions about what more authorities could have done to prevent the deaths. While the official media have laid blame on Shanghai officials for “sloppiness” in handling the holiday crowds, propaganda officials have also banned independent reporting on the incident and local authorities have tried to prevent families of victims from speaking with media. Simon Denyer at the Washington Post reports:

Shanghai police have admitted they failed to deploy enough officers to control a large crowd that had collected on the city’s waterfront Wednesday night, after underestimating the number of people who would turn up.

Nevertheless, with some officers fearing they could lose their jobs, the force did not take kindly to criticism. Dozens of people who posted critical comments online were subsequently interrogated by police, “as a warning to those unfriendly Internet users,” one police officer told the South China Morning Post, asking not to be identified.

The paper said several interviews with relatives of victims were interrupted by people who described themselves as “volunteers” at a Shanghai hospital, and who argued the interviews were “improper.”

Several of the victims’ family members lodged a protest at the Shanghai municipal government office buildings demanding compensation and the return of their loved ones’ bodies. Remains of foreign victims have already been returned to their families, Mandy Zuo reports for the South China Morning Post:

A young man from Chengdu, Sichuan province, who had lost his cousin in the accident, said the authorities were keeping a close watch over the relatives.

“We have been arranged to stay at different places. There are three people following us wherever we go,” he said, referring to people sent by the government to manage the relatives.

The man, who did not want to be named, said city government officials had yet to offer the relatives any kind words or to initiate any discussion on the incident, which many believe was a result of the government’s negligence.

“The mainlanders are being treated so differently from the Taiwanese … We wanted to talk to the government, but it didn’t want to talk to us,” he said. “At least the Taiwanese family has taken the body home, but we, local families, are still being banned from seeing the loved ones we lost.” [Source]

Meanwhile, Xi’an’s Modern College of Northwest University, which banned Christmas celebrations for its students in favor of propaganda films, issued a statement justifying their decision, saying the Shanghai tragedy, “has unfortunately shown the decision made by management of our college to be wise.” The university changed the headline of the statement following a public outcry.