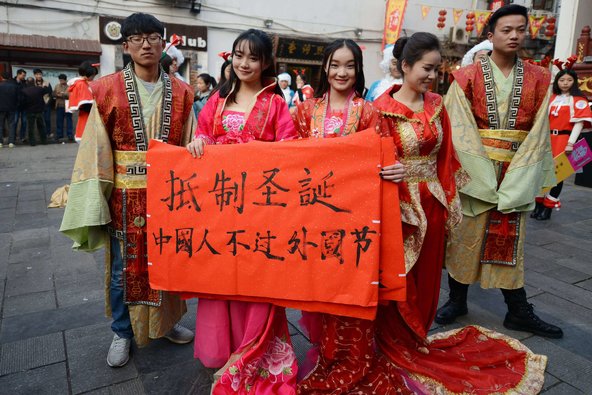 At BloombergView, Adam Minter reports that the Chinese Communist Party is renewing a campaign to pushback against the celebration of Christmas and the associated Western cultural values that it symbolizes.

Welcome to a new type of merry-making in China, where a Western holiday — even one drained of religious content, as it has been for most Chinese — can no longer be viewed simply as an opportunity to have a good time, but rather must be evaluated as one more parry in a “global competition of culture” that China’s Communist Party badly wants to win. The war has been ongoing (with China on the losing end) for decades. But it’s been renewed in recent years by China’s top leaders, who believe that China’s global cultural standing doesn’t match its economic and (increasingly) military standing.

[…] The problem for China’s culturally-minded leadership and like-minded Party members, is that — in China, at least — Western culture remains extremely popular. Hollywood movies regularly top China’s box office and Christmas has become one of China’s most popular holidays. According to a long-time friend in China’s hotel industry, Christmas Eve has been “the single biggest-grossing night for Shanghai’s food and beverage industry over the last decade.” It’s not hard to believe: on Christmas Eve in the Shanghai neighborhood I called home for nine years, restaurants and bars were overrun by young revelers who knew nothing of the religious content of the festival, but were merely were looking for a good reason to party. So why not party with Santa Claus? [Source]

At Xi’an’s Modern College of Northwest University, authorities have banned Christmas and forced students to view propaganda films and turn their attention to China’s own traditional holidays. From The Guardian:

A university in north-western China has banned Christmas, calling it a “kitsch” foreign celebration unbefitting of the country’s own traditions and making its students watch propaganda films instead, state media said on Thursday.

The state-run Beijing News said the Modern College of North-west University, located in Xi’an, had strung up banners around the campus reading “Strive to be outstanding sons and daughters of China, oppose kitsch western holidays” and “Resist the expansion of western culture”.

A student told the newspaper that they would be punished if they did not attend a mandatory three-hour screening of propaganda films, which other students said included one about Confucius, with teachers standing guard to stop people leaving.

[…] An official microblog belonging to one of the university’s Communist party committees posted comments calling for students not to “fawn on foreigners” and pay more attention to China’s holidays, such as the Spring Festival. [Source]

The education bureau in the coastal city of Wenzhou—home to a large Christian community–issued a circular Wednesday banning all Christmas activities in local schools and kindergartens, according to the official Xinhua news agency.  Wenzhou education official Zheng Shangzhong told Xinhua the purpose of the ban was to reverse local schools’ “obsession” with Western festivals at the expense of Chinese ones.

[…] Though the schools could not be reached for comment, the reported motivations appear consistent with Mr. Xi’s more nationalistic and ideological campaigns, analysts said. Under Mr. Xi, Beijing has promoted the study of traditional Chinese culture – once dismissed by the Communist Party as a vestige of the country’s feudal past – while warning about the dangers of infiltration by Western culture and political ideas.

“Christmas is a soft target for hard power,” said Russell Leigh Moses, a Beijing-based political analyst. “Culture is the field in which most political debates in this country start, whether it’s the content of a specific Peking opera or the celebration of a holiday.” [Source]

The backlash against Christmas comes amid an ongoing government crackdown on Christianity that has resulted in numerous church demolitions and the removal of crosses. The New York Times’ Andrew Jacobs reports:

Most alarming, Christian activists say, is the yearlong crackdown on church buildings in Wenzhou, a prosperous city in Zhejiang Province sometimes referred to as the Jerusalem of China for its large number of congregations. The government has targeted as many as 400 churches across the province, Christian rights advocates say, demolishing a number of churches and removing crosses on structures they say violate local zoning rules. A provincial policy statement that emerged this year, however, suggests the campaign is actually aimed at regulating “overly popular” religious activities.

According to Radio Free Asia, three people were wounded last week when more than 100 police officers and government workers forcibly removed a cross from a church in Hangzhou.

[…] Although China’s growing love affair with Christmas tends to be a largely faithless dalliance, the number of Christian adherents has been soaring in recent years. According to some estimates, there are more than 100 million believers here, a figure that stands in marked contrast to the 85 million members of the Communist Party. [Source]

Christmas’ soaring popularity among the Chinese stems from the fact that the holiday provides a convenient “excuse” for people to party, shop, and exchange gifts. Robert Foyle Hunwick at The Atlantic reports:

The Western religious festival is so trendy, in fact, that it may be the second-most-celebrated festival in China after the Spring Festival among young Chinese, according to research conducted by the China Social Survey Institute (CSSI), which found that 15- to 45-year-olds are the most likely to observe it. The holiday’s popularity is an outgrowth of study-abroad programs, said Sara Jane Ho, whose Institute Sarita specializes in educating wealthy Chinese on aspects of Western culture such as how to properly pronounce “Hermes”—the brand, rather than the Greek deity (the ‘h’ is silent, and the second ‘e’ accented).

[…] Christmas is “an excuse to party” whereas Chinese festivals are comparatively “solemn, serious, and spiritual,” Ho told me over mulled wine and petit fours. Instead of gathering around the family table for a turkey dinner (“Chinese don’t entertain at home,” Ho pointed out), most go to “entertainment places”—movie theaters, bars, or karaoke clubs—or out to eat, the CSSI survey noted. “Christmas is just an excuse to go shopping, as there are many big sales at a lot of places,” admitted Mo, a 33-year-old sales executive in Guangzhou. “The theme is to have fun.”

And at the end of a long and stressful year at work, it’s an opportunity to take stock and kick back. The CSSI survey lists “relaxation after a busy year” and “experience the new year’s atmosphere” among the top reasons cited for celebrating Christmas, along with “be closer to friends and colleagues” and “use the romantic atmosphere of Christmas to spread love.” Some take the latter rationale quite seriously. “Have you heard of such a phrase in China, ‘Silent Night, First Night?’” asked Long Fei, an assistant pastor at an “underground” church in Beijing whose activities are not officially monitored or approved by China’s religious authorities. “Many young people choose to give themselves to their beloved on this eve and eat forbidden fruit.” [Source]

Some argue that boycotting Christmas is not the solution to reviving China’s traditional culture, an opinion expressed by state-run Xinhua News:

The debates over Christmas, however, reveal certain anxieties behind China’s cultural ambitions. Some critics associate Christmas with a public obsession for anything Western, while others lament the “shipwreck” of Chinese culture.

[…] There is no need to pit Western festivals against Chinese: Chinese Christmas revelers will still number among the hundreds of millions who travel home for the Lunar New Year family reunion.

That said, what Chinese festivals can learn from Christmas fever is how to build up their appeal. There are Christmas, Valentine’s Day and Halloween movies but few such pop-culture biproducts exist for Chinese festivals, except for some festive foods.

Even the mooncake and other traditional sweets are evolving to suit low-calorie modern life, as will traditional festivals, but evolution lies in confidently facing up to cultural imports. Barring them from joining the game is no fun. [Source]

Minitrue: Do Not Report Christmas-related News