China Snuffs Out Last Online Remnants of the NY Times 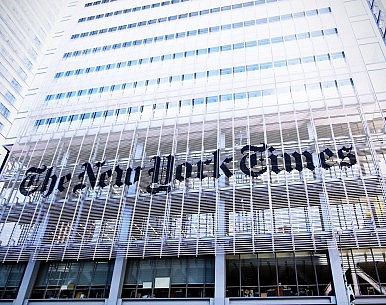 At The Diplomat, David Dawson reports that the Weibo accounts of the New York Times and several of the paper’s employees have been deleted. The New York Times’ English- and Chinese-language web portals have been blocked in China since October 2012, following the paper’s publication of an exposé on the wealth accumulated by the family of former premier Wen Jiabao.

Inquiries with Sina Weibo regarding the reason for the shutdown were answered with three very telling characters – 网管办 (wang guan ban) – the Internet control authorities.

Given the timing of the removal of all three accounts on the same day as well as the reasons cited, it seems clear this is a direct move to remove the last vestiges of the New York Times from Chinese cyberspace – regardless of what content they were spreading. If this is the case, this shutdown is likely to be permanent.

The New York Times’ Sina Weibo account didn’t tackle subjects with the same sensitivity as those in the publication, which is probably why it outlasted the other social media accounts of the Chinese edition of the newspaper. The Times previously boasted a number of verified Sina Weibo accounts as well as a WeChat account and a mobile app. One by one they have all succumbed. […] [Source]

China Snuffs out Last Online Remnants of the New York Times http://t.co/YcRRxtXho2 (they also killed off most of our staff weibo accounts)

Dawson’s report for The Diplomat continues to contrast the post exposé mainland experiences of the New York Times’ with those of Bloomberg News. After running a 2012 story on the family wealth of Xi Jinping, Bloomberg chose not to run a separate story connecting Chinese leaders to wealthy businessmen. While The Diplomat reports that Bloomberg’s website is accessible in China and the organization’s Weibo accounts remain online, tests from GreatFire.org show the site being 100% blocked over the last 90 days, and Weibo searches for the Chinese translation 彭博新闻社 yield the standard disclaimer denoting a “sensitive word.” For more on the conditions facing foreign and domestic media in China, see prior CDT coverage.