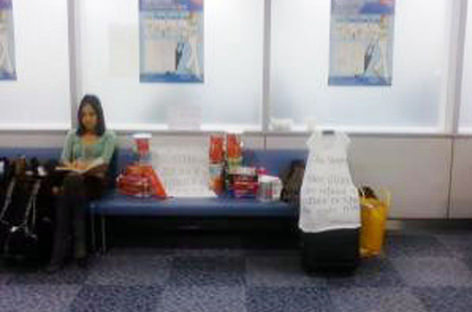 After he was denied re-entry to China eight times, Feng Zhenghu lived in Tokyo’s Narita Airport for 92 days in 2009-2010. Now Feng is telling the story of his airport odyssey on his blog, and CDT is translating his account. This is part 11. Read previous installments here. 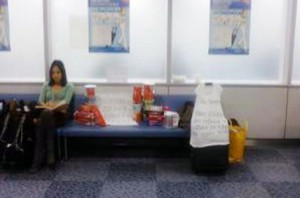 At the agreed upon time earlier today, I emailed my diary entry to the Internet whiz who is supporting my return to China. He told me, “The Feng Zhenghu Twitter account has already been set up at http://twitter.com/fzhenghu.”

My first tweet: “I am Chinese citizen Feng Zhenghu. I’ve been denied re-entry to China eight times by the Shanghai authorities. Unwilling to submit this last time, the Shanghai police violently abducted me back to Japan. Now I have a country I can’t return to, and I’m not willing to enter a foreign country either. I’ve been living in the immigration hall of Terminal 1 of Narita International Airport, the gateway to Japan, for over 10 days now, without food, without changing my clothes, sleeping on a bench. I haven’t showered, and my computer can’t connect to the Internet, so I have to rely on my cellphone to communicate.

At about 2:30 in the afternoon, Christina Chan, a student at Hong Kong University, acting on the behalf of Hong Kong residents and overseas Chinese in the US, brought me instant noodles, crackers, and a great deal of other food, enough to feed me for well over half a month. She was very thoughtful—she also bought me an electric tea kettle, along with an electrical outlet adapter. Christina was actually at Narita Airport yesterday (Thursday), but since she couldn’t leave the hall she was in to see me, less than 24 hours later she flew back to Japan just so that she could give me these gifts from the overseas Chinese.

When I first announced that I was giving up my Japanese visa and refusing to enter Japan, the airline and Narita Airport both refused to help me. Now, though, their attitude had started to change. This afternoon, officials from the Immigration Bureau had a cordial meeting with me to discuss my return to China. They said that they were also taking my problem into consideration, and since my resolve was so strong, they were considering the possibility of letting me stay here, or having me go back to China. A section manager for the corporation that manages Japanese airports also sent me some food.

I couldn’t decide what to eat for dinner. This a pauper with only the meagerest of rations had suddenly become a wealthy man. But my stomach had shrunk a great deal, so I couldn’t eat or drink in normally and needed time to recover my appetite. My dinner was still just a slice of bread, carefully chewed and swallowed. I sincerely thank the residents of Hong Kong and US overseas Chinese for their care and concern.

American president Barack Obama came to Japan today. I made another DIY petition T-shirt which reads (in English), “Chinese citizen has been refused to return to China for eight times.” On the back I wrote, “Chinese Human Rights, Return to China” in both Chinese and English. I put the shirt on my small suitcase, which I placed next to where I was sitting. Any official from any country would come through the diplomatic passageway and see it. Of course, the American president didn’t see my sign, since head of states take their own planes into Japan. [Chinese] 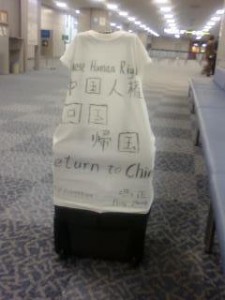 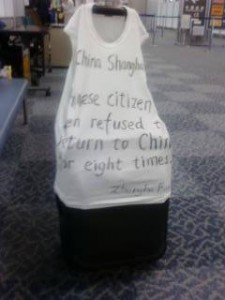