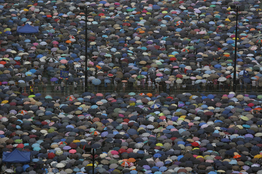 Two months after the Hong Kong street protest movement was brought to an end, the reverberations are still being felt throughout society. In the New York Times, Lauren Hilgers looks at the origins and development of the movement and the lasting impact it has had on participants:

Hong Kong is a city whose self-conception is, above all, as a good place — a polite place — to do business. It scores well in global transparency studies. Taxes are kept low to encourage commerce. Nominally, under the arrangement known as One Country, Two Systems, the city is free to govern itself. But under Hong Kong’s strange mix of authoritarianism and corporatism, the general public votes on only half of the seats in the city legislature, with many of the remaining seats decided by corporations. The city leader, known as the chief executive, is selected by an electoral committee, a majority of whose members are not subject to popular vote and are widely believed to be under the control of mainland China.

Despite this, people in Hong Kong have held out hope that Beijing might eventually allow them real democracy. This hope was dashed last August, when China issued an edict that reserved the power to choose the candidates for Hong Kong’s highest leadership position. The decision spurred the democracy movement into the streets, where protesters demanded the opportunity to nominate and elect their own chief executive — the chance to do better. The odds of bringing Beijing to the negotiating table were, from the beginning, understood as slim, but the protesters aimed to show China’s leaders their displeasure. “It’s a war, not just a battle,” Joshua Wong, Hong Kong’s most famous student activist, told me the day after Occupy ended. “We still have time.”

[…] For the students in the First Defensive Line, the movement didn’t change their daily lives, but it changed them. I met up with a few of them at a Häagen-Dazs in Mong Kok a few days after the protest. Jodi had a yellow ribbon pinned just beneath her scarf. “We didn’t successfully fight for what we wanted,” she said. “But more and more teenagers will think more about the government and society, and one day we will have some success. Not this month or next year. I believe it will be a long fight.” [Source]

Divisions in society between pro-democracy and pro-mainland forces were exacerbated during the protest movement, and this has been felt especially acutely in academia, according to a report in Lowy Interpreter by Julian Snelder:

The most significant impact will be on the education sector. Just as Deng Xiaoping concluded that the attitudes of youth were instrumental in the 1989 movement, so the topic of national education will become a future ‘ideological battleground’, as the state media likes to say.

Chen Zuo’er, a heavyweight adviser to Xi Jinping, maintains China has a national interest in education policy and must ‘correctly guide’ schools. That’s taken by local teachers to mean ‘obedience and loyalty, rather than freedom and critical thinking.’ A nasty struggle over appointments at Hong Kong University, one of Asia’s best, stems from its permission of radical, provocative publications. Beijing in particular objects to ‘HongKongism’ and its reaction to university independence movements is understandably irate.

[…] The question is whether the young will be receptive. ‘We’ll be back’ was the combative message they chalked on walls and roads as the students dismantled and departed their giant campsite in December. This year threatens an ongoing test of strength between Hong Kong students and the world’s mightiest authoritarian state. [Source]

Students who are not receptive to even perceived Chinese influence in Hong Kong schools have protested against the campaign by a mainland student — and former Communist Youth League member — for a student government position. Ran Liu reports for Foreign Policy:

Ye’s trajectory seemed unremarkable until she ran for a position in the Students’ Union at the University of Hong Kong. (Students run as groups, or “cabinets.”) The student organization was founded in 1912 and is known for active participation in pro-democratic movements; no mainland Chinese has joined before. Ye suddenly became famous on Jan. 24, when a short video made by HKU campus television outed her as a former member of the League — and alleged she had connections high within Beijing’s government. Local media soon picked up the story, in some cases complete with zesty headlines about HKU television “blowing the whistle” on a potential “red cabinet.” Ye’s response the next day — that “I came here because I admire the freedom and democracy” at HKU — was largely ignored. But her subsequent (and statistically incorrect) comment on Feb. 3 that “99 percent of mainland students in HKU used to be League members” struck a chord among Hong Kongers already worried about encroachment from Beijing. A blogger at The VJ Media, a local left-wing website, claimed that even mainlanders who had not joined the League had nonetheless “received red ideological education.” Passion Times, a stridently anti-Beijing protest group, wrote that Ye’s candidacy was “the tip of the iceberg” of communist penetration of Hong Kong campuses. [Source]

The shifting political dynamics in Hong Kong have led an increasing number of residents to move elsewhere. Journalist Verna Yu writes in the New York Times about why she and others like her may opt to leave the territory:

Beijing’s refusal to grant genuine democracy to Hong Kong — it insists on screening candidates for Hong Kong’s “election” for the city’s leader in 2017 — and its hostility toward people clamoring for free elections, plus its avowed determination to instill a sense of patriotism among our children, makes many Hong Kongers, especially parents like me with young children, nervous.

I dread the idea of my children growing up in a society where the values of Hong Kong — such as the rule of law, freedom of press, speech and assembly — are being eroded.

More and more, we feel Hong Kong is becoming just another Chinese city. Since the start of the Umbrella Movement in late September, we have seen the police using tactics against activists that resemble those used in China to prosecute critics of the government.

I don’t want to tell my children my worry that if one day they take part in demonstrations or post critical comments online, the police might take them away. [Source]

For his part, Chief Executive C.Y. Leung took advantage of the Lunar New Year to call on residents of Hong Kong to behave more like sheep. Reuters reports:

“Last year was no easy ride for Hong Kong. Our society was rife with differences and conflicts,” he said.

“In the coming year, I hope that all people in Hong Kong will take inspiration from the sheep’s character and pull together in an accommodating manner to work for Hong Kong’s future.”

He described sheep as “widely seen to be mild and gentle animals living peacefully in groups”.

Chambers dictionary describes a sheep as “a creature that follows meekly, is at the mercy of the wolf or the shearer and displays tameness of spirit”. [Source]