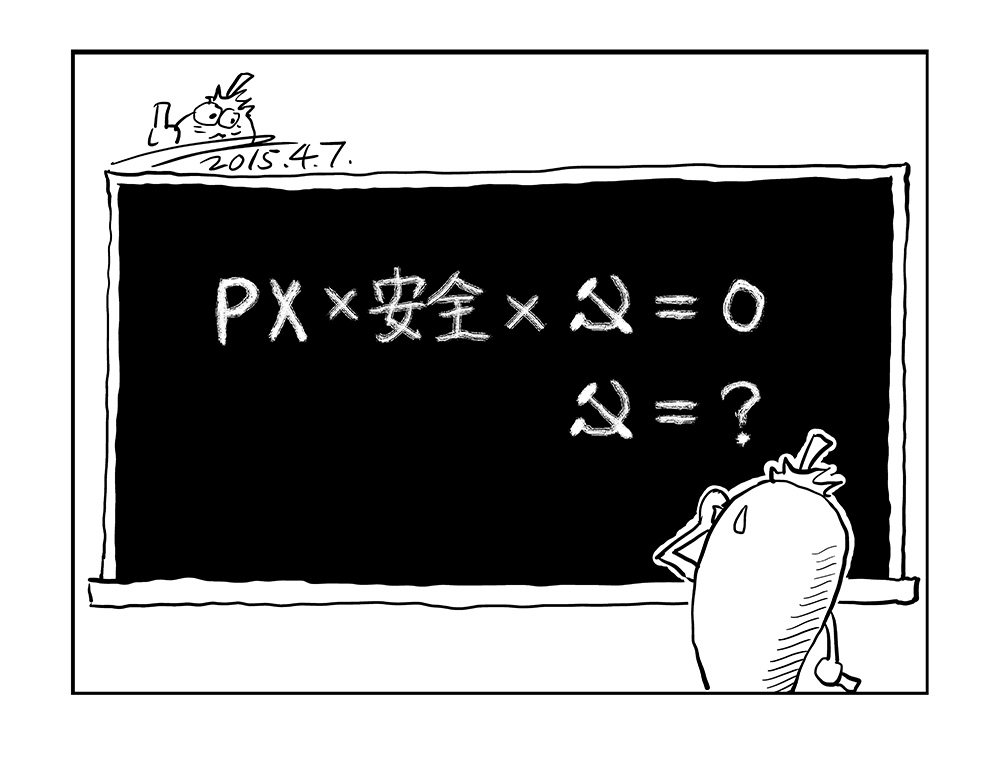 Following an explosion at a chemical plant in Fujian, cartoonist Rebel Pepper has translated concerns over industrial safety in China into a math equation, in which the Chinese Communist Party is the unknown variable when paraxylene (PX) is multiplied by safety resulting in a product of zero.

The PX Equation, by Rebel Pepper: A massive explosion at a factory producing PX in Zhangzhou, Fujian, has again raised the issue of the safety of such chemical plants in China. This particular plant was the focus of one of the first social media-enabled NIMBY protests in 2007 when residents of Xiamen took to the streets to protest its construction. The government finally acquiesced and moved the plant inland to less-densely populated Zhangzhou. However, in 2013, the first explosion there again raised safety concerns about chemical contamination. Austin Ramzy of the New York Times reports on this week’s explosion:

The explosion ignited three storage tanks, and flames continued to burn through the evening, Xinhua reported. More than 750 firefighters and police officers responded to the emergency, the authorities said.

The plant produces paraxylene, also known as PX, a chemical used in the manufacture of plastics and polyester that has been the target of large environmental protests in China. The plant had originally been planned for the coastal city of Xiamen, but local resistance there in 2007 led to its being moved to a less-developed area about 60 miles inland.

The explosions Monday were the second major accident at the plant in less than two years. In 2013, an explosion ripped through the plant, damaging nearby homes but causing no injuries. That blast happened on the same day that People’s Daily, the official newspaper of China’s ruling Communist Party, ran an article touting the safety of paraxlyene and arguing that the public’s suspicions were leading to a critical shortfall of the substance, forcing China to be overly reliant on imports. [Source]

The People’s Daily article referenced by Ramzy stated that PX was no more dangerous than coffee. While the health and environmental effects of PX production have been debated within China, some observers argue that domestic production is not safe due to less stringent safety regulations.

Since the Xiamen PX protests, concerned residents have taken to the streets in other cities where similar industrial projects were planned. Most recently, police used violence to break up protests against pollution from chemical plants in Inner Mongolia; authorities have agreed to cease production at the factories while reports of pollution are investigated.