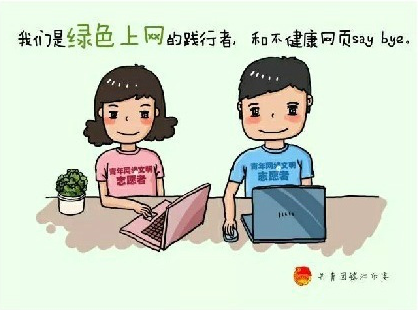 The Communist Youth League of China (CYL) is launching a “Youth Internet Civilization Volunteer Campaign” this year, according to a notice released by the CYL on February 13. The campaign will involve over 10.5 million volunteers across the country, including four million on university “battlefronts,” who will exemplify “positive energy” in Internet usage, post comments that support Party ideology, and report “unhealthy” online information. The volunteers are expected to participate in “themed online events” throughout the year, and to guide online public opinion through “Operation Sunshine Comments.” 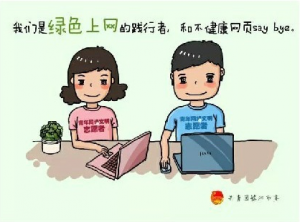 “We are green Internet users. We say ‘bye’ to unhealthy webpages.” (Source: Weibo)

A minimum of 20% of university CYL members are required to join the campaign. Guangzhou’s Sun Yat-sen University has a quota of 9,000 volunteers, the highest of all universities. Sun Yat-sen is one of three elite institutions which have recently pledged to uphold Party ideology and control on campus. Last year, the CYL called for the establishment of Internet propaganda teams at higher education institutions, with province-by-province quotas for “propaganda workers.” This new campaign builds on the infrastructure of the university propaganda teams. The notice is publicly available, as evidenced by Baidu search results. A series of cartoons about “youth Internet civilization volunteers” is pinned to the top of the CYL Weibo account.

CDT has translated the notice and the list of volunteer quotas by province:

Communist Youth League (CYL) committees of all provinces, ethnic autonomous regions and municipalities, the National Railway Youth Corps Committee, the Civil Aviation Administration, departments under direct control of the Chinese Communist Party (CCP) Central Committee, central government agencies, central financial institutions, central corporations, and the Xinjiang Production and Construction Corps:  In order to thoroughly put into practice the important instructions and thoughts of Secretary-General Xi Jinping, to mobilize the vast numbers of CYL members and outstanding young people from all fields to extend their progressiveness and sense of responsibility to the Internet, to strive to be “good netizens of China,” to actively let sound the “Voice of the Youth” on the Internet, and to become the vital force of building a bright Internet community, the CYL Central Committee has come to the researched decision to unite in encouraging members to become registered volunteers, to establish a youth Internet civilization volunteer team across the organization, and to intensively push forward the Youth Internet Civilization Volunteer Campaign. Related items are as follows.

I. Constituents of the Youth Internet Civilization Volunteer Team

All levels of the CYL shall mobilize to organize the following personnel to join the youth Internet civilization volunteer team:

2. Full-time and part-time CYL cadres and Young Pioneers counselors at all levels;

4. Registered volunteers connected with all levels of the CYL.

In principle, the total number of CYL volunteers mobilized by the provincial, municipal and county levels of the CYL to participate in the “Youth Internet Civilization Campaign” should be no less than 20% of total local CYL members; the university battlefront shall cover each and every university. The number of people mobilized by each university shall be no less than 20% of its CYL members and shall cover the CYL branches of every class.

The building of youth Internet civilization volunteer teams at all levels of the CYL should be basically ready by May 4, 2015 and completed by late June.

1. Actively spread positive energy on the Internet. Actively participate in “Operation Sunshine Comments” initiated by the CYL Central Committee: post on the Internet with civilized language and a rational attitude and build a rational, calm, and ordered atmosphere of Internet public opinion. Actively participate in the “Voice of the Youth” Internet cultural initiative: actively post Weibo, WeChat, BBS posts and videos that spread core socialist values based on the Chinese Dream, advancing reform, advancing rule of law, hard work and entrepreneurship, and social interest.

3. Consciously strengthen the self-cultivation of Internet civilization. Obey the Internet laws and regulations and standards of online civilization. Take the initiative to use the Internet legally, civilly, and healthily. Do not browse unhealthy web pages. Do not invent, believe, or disseminate rumors.

1. Special Events for China Youth Volunteers Service Day: Around the time of China Youth Volunteers Service Day on March 5, all levels of the CYL, especially at the mass grassroots level, shall through the theme of Youth League activity days and other means centrally launch the Youth Internet Civilization Volunteer Campaign. Organize and mobilize CYL members to become Internet civilization volunteers. Post content on the “Internet Civilization Volunteer Announcement” to Weibo, WeChat, BBS forums, and other channels. Repost the CYL Central Committee’s “Bright Internet, Youth Power” proposal. Launch offline meetings and Internet civilization talks, sign commitments, and publicize the campaign through mobilization speeches. CYL leaders at all levels shall each attend one special event at a grassroots-level work unit.

4. Local Internet Volunteer Events: All levels of the CYL, in light of local circumstances, shall actively design and plan topics, organize, and mobilize the youth Internet civilization volunteers at local work units to proactively engage in online activities, striving to create a harmonious and orderly Internet public opinion atmosphere for their locales and work units.

In 2015, each youth Internet civilization volunteer shall attend no less than three “Operation Sunshine Comments” and similarly themed online activities. At the same time, direct and encourage youth Internet civilization volunteers to actively propose and attend online activities that spread positive energy, and to actively participate in volunteer activities such as reporting unhealthy online information.

1. Emphasize Importance, Strengthen Leadership: Youth Internet civilization volunteers are important components of of the CYL online propaganda team. The Youth Internet Civilization Campaign concerns the strength and effect of CYL participation in directing online public opinion, and tests the ability of the CYL to execute the Party’s requirements and to act as the assistant and reserve force to the Party under new circumstances. All levels of CYL leadership shall accord great attention to this task and treat it as the most important among the important tasks of 2015. The campaign is to be carefully planned and thoroughly executed.