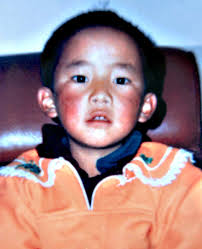 May 17 marked the 20-year anniversary of the disappearance of Gedhun Choekyi Nyima, the Tibetan boy who was detained by Chinese authorities days after the Dalai Lama named him as the 11th incarnation of the Panchen Lama—the second highest-ranking lama (after the Dalai Lama) in the Gelug school of Tibetan Buddhism. Beijing then selected Gyaincain Norbu, the son of two CCP members, as the 11th Panchen Lama. After briefly outlining the controversy surrounding the 11th Panchen Lama, the disappearance of the Dalai Lama’s candidate, and the lack of information about his current whereabouts over the past two decades, BBC reports on renewed calls for his release:

Wangdue Tsering, press spokesman for the Office of Tibet in London, told the BBC that events were taking place on Sunday across the world to mark the 20th anniversary of Gendhun Choekyi Nyima’s disappearance, including a candle-lit vigil outside the Chinese embassy in London.

[…] “We are appealing to the world community to help us find out where the Panchen Lama is,” Mr Tsering told the BBC’s Asia analyst Michael Bristow.

“It’s 20 years since he disappeared and we don’t know where he is, where his family is and how he is. We want the Chinese authorities to give some information.”

For more on the topic from Tibetan activists and members of the Central Tibetan Authority, listen to a broadcast from Voice of America, or read a writeup from Dharamsala-based news website Phayul.com.

In recent months, the strained relationship between the Dalai Lama and Beijing has been in the spotlight. In October of last year, the Dalai Lama claimed that informal discussions about a pilgrimage to China were under way; Beijing quickly dismissed the trip as an impossibility. In December, the 80-year-old spiritual leader suggested for a second time in foreign media interviews that he may not reincarnate after his death—a move to politically disarm Beijing, who will likely try to appoint his successor. State media then criticized the Dalai Lama for “abusing his religious influence for political purposes.” Last month, Beijing released a lengthy white paper praising central policies in Tibet, presenting an interpretation of history legitimizing Chinese sovereignty, and reiterating the official view that the Dalai Lama is a separatist.