Words of the Week: Death by Nightmare 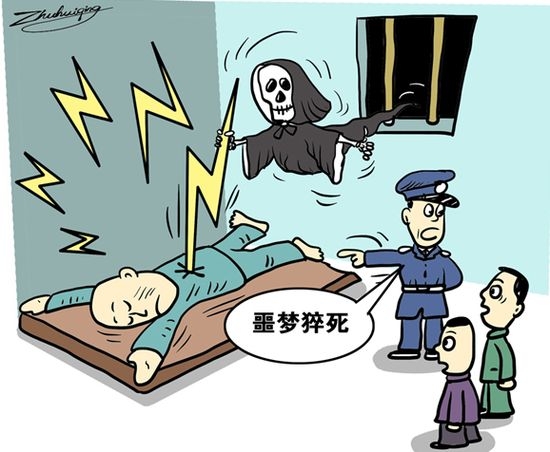 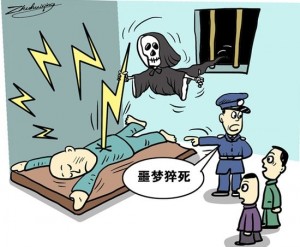 “He died suddenly of a nightmare.” (Artist: Zhuhuiqing)

On March 27, 2009, a 50-year-old man named Li Wenyan died in the Jiujiang City Detention Center in Jiangxi. Officials claimed that a nightmare had caused his sudden death. Li had cried out in the middle of a bad dream, but died hours later in a hospital bed. The family noticed large bruises on Li’s forehead.

Example of “death by nightmare”:

@Benlee_MM: What’s Up With “Naturally”?: Recently, a criminal surnamed Wang in the Nehe Prison in Heilongjiang had relations with the wife of a certain Officer Li. And the surveillance video was “naturally” lost? In ’09 a young man from Yunnan, Li Qiaoming, died from “hide-and-seek” in detention, and the camera was “naturally” broken; in the same year Li Wenyan from Wuhan died from a nightmare while in detention, and the surveillance hard disk was “naturally” broken. Government credibility has been eroded by responisble leaders failing to see this footage and not recognizing the mistake. Do you believe it? I do! (January 25, 2015)