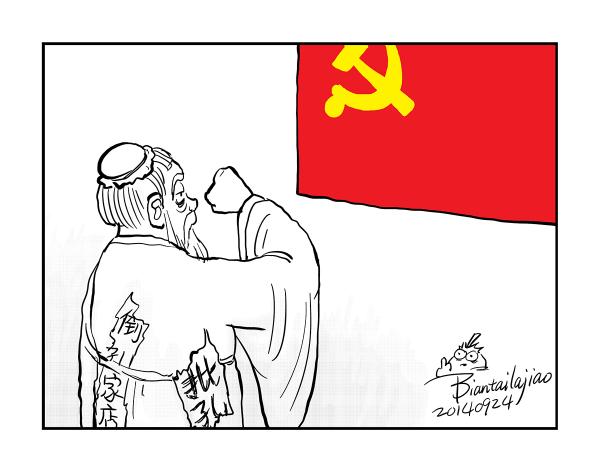 The Chinese Communist Party grew by 1.3% in 2014 to 87.8 million members, according to a communique released on Tuesday by the Organization Department of the Central Committee. This comprises about nearly 8% of China’s adult population and makes the Party larger than the population of Germany.

The rate of Party growth has slowed from previous years, which the report attributes to efforts to control the “quality of members” and strengthen the Party’s “vigor and vitality.” AP links these efforts to President Xi Jinping’s consolidation of Party control of the government as well as non-governmental organizations. The refinement of Party membership also comes amid Xi’s anti-corruption campaign. Still, “slimming down is hard to do,” as Wall Street Journal’s Felicia Sonmez explains:

China is in the midst of a sweeping anti-graft campaign under President Xi Jinping, with announcements of corrupt officials’ investigation and ouster from the party a near-weekly occurrence. Along with that crackdown has come a steady stream of warnings for party members to rein in behavior ranging from their mahjong playing to the use of terms like “dude” or “boss” when addressing their superiors.

At its heart is the pursuit of the party’s survival. Xi and other top leaders have made a point of reminding cadres that the Chinese Communist Party must avoid the same pitfalls that brought about the demise of the former Soviet Union – particularly disloyalty to Communist ideals – with some Chinese scholars warning that the Soviet collapse came when the ranks of its Communist Party had swollen to an unwieldy 19 million, or nearly 10% of the Soviet Union’s adult population.

Yet despite a vow by China’s Politburo leaders to limit the party’s size and purge “unqualified members,” statistics released by the Organization Department show that membership has actually grown over each of the past four years, albeit at an increasingly slower rate. [Source]

A facelift accompanies the nip and tuck of the new membership statistics. 82% of new members in 2014 were under 35, while the People’s Daily reports that “students make up 37.3% of new Party members, the largest proportion [of any group].”

But the new image falls flat for some Weibo users, who continue to see bloat in the ranks of the Party. “Strive for 1.3 billion,” writes Yuanyulailüshi (@袁裕来律师). Better yet, recruit the whole world, suggests @bjzyh51.

Other netizens rail against the opportunism of many young recruits, who see Party membership more as a resume booster than a political affiliation. A 2014 Fudan University study found that Party members in Shanghai made up the majority of the city’s richest young adults. Despite the anti-corruption campaign’s measures to cut back on extravagant spending among cadres, many netizens still perceive Party membership as a tool for personal gain:

Youjiduiyuan79813 (@游击队员79813): There’s not one person guilty of graft who isn’t a Party member. I hope the members get more honest.

NingjingzhiyuanJIAXING (@宁静致远JIAXING): Let me just say that many of the Party members I’ve had contact with are really selfish. If it’s something good they fight over it, and their political awareness is worse than ordinary people’s. Party fees pay for trips to so-called sacred revolutionary sites or for gifts on July 1 [Party Founding Day]. I just hate them now!

Xiangjiaozhongjiezhe (@香蕉终结者): I was the class head at university, but because the head teacher and I didn’t get along, I didn’t have a chance to join the Party after I was done with classes. I may be the only class head who isn’t a Party member. For this, I am forever grateful to my teacher. [Chinese]