Recrimination and Regret Over the Hong Kong Vote 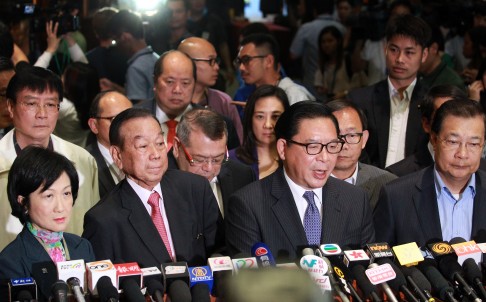 Following the walk-out by pro-Beijing members of Hong Kong’s Legislative Council just before Thursday’s vote on electoral reforms, accusations and recriminations over the ill-timed maneuver have flown. The walk-out resulted in a landslide defeat for the measure, which would have required all candidates for the chief executive to be approved by a committee selected by Beijing. While the reforms were not expected to pass, the overwhelming defeat proved to be an embarrassment to Beijing. The Economist reports on the incident and its impact on Beijing’s relationship with Hong Kong:

The only surprise was a bizarre walkout staged by pro-establishment lawmakers just before the vote. This meant that the plan was defeated far more soundly than expected, with only eight voting in favour of it. Voting rules required support from at least two-thirds of members for the package to pass. Though expected, the outcome is an embarrassment for the leadership in Beijing. It had badly wanted to be seen to be fulfilling the commitment it gave in its mini-constitution for post-colonial Hong Kong, known as the Basic Law, which says that the territory may eventually enjoy universal suffrage. China never offered Western-style democracy in Hong Kong, but thought it could allow one-person-one-vote while maintaining sufficient control over the process to ensure that a critic of the party would never be elected.

The leadership in Beijing had made it clear there was no other offer. That means the next elections will be held according to the existing rules: a similar kind of committee will choose the chief executive, but without a public vote. This leaves pro-democracy politicians in a quandary. Polls had suggested that public opinion is roughly evenly split between those who wanted legislators to vote down the plan, and those who believed that it would be better to accept it, even if it is flawed. If the outcome of the vote is greater tension between radical activists in Hong Kong and leaders in Beijing who are unwilling to make any concessions on voting procedures, then democrats risk losing support among moderates who fear turmoil. The possibility of growing street unrest became evident late last year when pro-democracy demonstrators staged unprecedented sit-ins on major roads for 79 days. [Source]

Those who participated in the walk-out attempted to explain their actions and to apologize, with New People’s Party chairwoman Regina Ip and Business and Professionals Alliance vice-chairman Jeffrey Lam Kin-fung both publicly weeping. Lau Suk-yee Tony Cheung, Lai Ying-kit and Jeffie Lam report for the South China Morning Post on the explanations offered by Lam and other coordinators of the walk-out:

Some called for an explanation while others demanded lessons be learned after the confusing walkout that saw the controversial blueprint for the 2017 chief executive election receive only eight “yes” votes, while the pan-democrats sarcastically thanked Beijing loyalists for their “support” in blocking the resolution.

The fiasco has been described by analysts as an “embarrassment” for Beijing, and the central government’s liaison office has been meeting or phoning pro-establishment lawmakers about it over the last two days.

Much of the blame has been placed on business representative and Executive Council member Jeffrey Lam Kin-fung, seen as a key instigator of the walkout in which 31 lawmakers left the chamber in an attempt to force a suspension of the meeting so that Lam’s Business and Professionals Alliance colleague, Lau Wong-fat, could make it for the vote on the Beijing-decreed package.

During the drama, seconds before the historic vote was due to proceed, another pro-establishment heavyweight, Ip Kwok-him of the Democratic Alliance for the Betterment and Progress of Hong Kong, stood up and ushered everyone to the exit. He apologised for his part yesterday. [Source]

As many expected, Beijing officials condemned the results of the vote and cast blame on the pan-democratic representatives. From the Global Times:

The Hong Kong and Macao Affairs Office of the State Council said it hopes the regional government would promote unity, prosperity and stability in Hong Kong, while the liaison office of the central government in Hong Kong also urged the region to end partisanship and work together for a better economy and people’s livelihood, reported the Xinhua News Agency.

[…] Meanwhile, analysts and lawmakers said they are concerned over possible obstacles to economic development in the region as uncertainty and disputes in the political arena keep haunting Hong Kong.

“Pan-democratic lawmakers may continue to hijack government bills that would benefit the economy and people’s livelihood by filibustering to stall and block them,” local lawmaker Michael Tien Puk-sun told the Global Times Thursday. [Source]

Kelvin Chan at AP reports on the People’s Daily editorial, which neglected to mention the walk-out:

The Chinese Communist Party’s flagship newspaper published an editorial deploring the vote and accusing the pro-democracy camp of being “selfish” and not heeding public opinion in rejecting the government’s election proposals.

“The actions of the opposition camp show they are the upsetters and destroyers of Hong Kong’s democratic development process,” the People’s Daily said.

[…] The People’s Daily editorial said pro-democracy lawmakers should take “full responsibility” for blocking the proposal but didn’t mention an embarrassing blunder by pro-establishment lawmakers that left most of them accidentally unable to vote in support. [Source]

In the first of a two-part series for the South China Morning Post, Jeffie Lam looks at the fallout of the vote for the pro-Beijing camp in the Hong Kong government.

A day after the vote, Chief Executive C.Y. Leung appeared to heed the State Council’s recommendations and announced a series of economic initiatives, promising to work together with the Legislative Council on future issues. From Isabella Steger at the Wall Street Journal:

Chief Executive Leung Chun-ying said Hong Kong’s government hoped to “forge a new relationship” with Legislative Council members. The remarks, at a news conference Friday, represented the first clear sign the government hopes to soothe some of the tensions in Hong Kong society after a year of political turmoil.

[…] Chief Executive Leung Chun-ying said he would bring a series of economic initiatives to lawmakers next week, and called for their support.

Democratic lawmakers had been filibustering all budget items during the city’s pro-democracy protests, holding up funding for a variety of slated projects. Leung said that a continuation of such actions would hurt the community.

“It’s time for all of us to move on,” Leung told reporters. “We should try to forge consensus on various economic and livelihood issues.” [Source]

The next step for pro-democracy protesters, who filled the streets of Hong Kong for seven weeks in Fall 2014, is unclear. In response to last year’s Occupy Central movement and to growing resentment over Beijing’s growing role in Hong Kong affairs, Chinese authorities have been trying to influence public opinion in Hong Kong through United Front work, according to an investigation by James Pomfret and Greg Torode of Reuters:

The tense hours before the vote sparked protests by dozens of pro-Beijing groups outside the Legislative Council – a push diplomats, politicians and academics believe highlights an intensified effort by China to exert control over the Asian financial hub.

That effort is run through the United Front Work Department, a branch of the Communist Party’s Central Committee with a mission to spread China’s reach by gaining control and influence over a range of groups not affiliated with the party, sources with ties to Beijing have told Reuters.

[…] A Reuters analysis of more than 200 articles in the Ta Kung Pao and another pro-Beijing newspaper, the Wen Wei Po, over the past half-year offers a window into the workings of United Front operations.

It found that a flurry of senior United Front officials from at least 14 mainland Chinese cities, provinces and counties visited Hong Kong over the period, meeting the expanding network of pro-Beijing groups, including at least nine involved in the recent protest. [Source]

Despite the vote, some advocates for full democracy have vowed to carry on the movement, which is now largely divided between those calling for democratic reforms in China and those who are only focusing on issues as they affect Hong Kong. Shannon Van Sant reports for Voice of America:

[…] Political parties are already gearing up for the next battle – district elections this November.

“We have the district council elections in November of this year, then we have the legislative council elections in September of next year,” said Joseph Cheng, a democracy activist and Professor at the City University of Hong Kong. “The strategy on the part of the government, on the part of the establishment, seems to be to discredit the pro-democracy camp for vetoeing the bill and to try to snatch as many seats from them as possible in the two elections.” [Source]

U.S. officials have said they will raise the Hong Kong vote during next week’s annual US-China Strategic and Economic Dialogue. From the South China Morning Post:

Scott Robinson, spokesman for the US consulate in Hong Kong, said the US government encouraged the Hong Kong government, Beijing and the people of Hong Kong to continue to work together towards the goal of achieving universal suffrage in accordance with the Basic Law and the aspirations of Hongkongers.

“We greatly value our relationship with Hong Kong and have a deep and abiding interest in its stability and prosperity. Hong Kong’s open society, rule of law and free market are based on principles Americans and the people of Hong Kong share.” [Source]