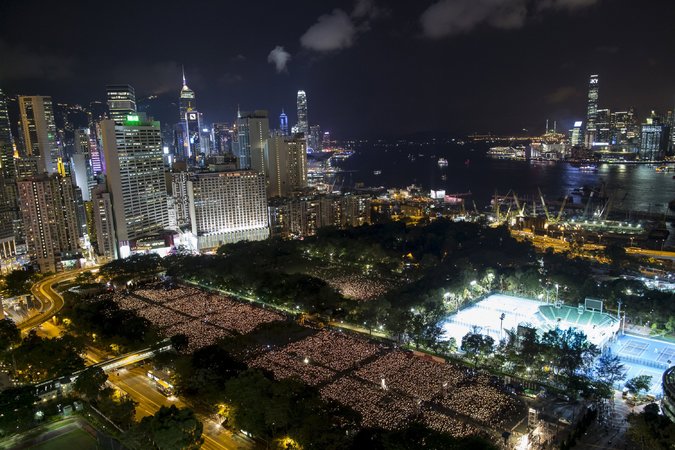 This year, tens of thousands of Hong Kong residents attended the annual vigil to mark the anniversary of June 4th. The gathering was marked by last year’s Occupy Central protest movement, and societal divisions that grew out of that movement between the older generation of activists who identify as Chinese and the younger generation who sees themselves first as citizens of Hong Kong. From Rishi Iyengar of Time:

People began pouring in to the large public park in Hong Kong’s downtown Causeway Bay district by 6 p.m., two hours before the sweltering vigil officially began, and continued to arrive well after it started. Volunteers from various political parties and civil-society groups lined the approach, addressing the crowd through loudhailers, attempting to raise funds and — this being pragmatic, capitalist Hong Kong — selling fans and small folding chairs.

The 25th anniversary of the massacre last year saw an estimated 180,000 attendees. This year’s crowd was also impressive, with the six adjacent soccer fields at the park’s center quickly filling up, forcing thousands of late arrivals to be accommodated on grassy expanses elsewhere in the park. The organizers estimated the final attendance at around 135,000. (The Hong Kong police, notorious for the conservatism of their crowd estimates, put the crowd at just over 46,000.)

Several hard-line democracy groups and student unions chose to give the vigil a miss and organized their own events to observe the 26th anniversary of the bloody crackdown in Beijing. Many young people do not agree with the call, made each year by the organizers of the main vigil, for a unified democratic China. Instead, they feel linguistically, culturally, and historically alienated from mainland China and argue that Hong Kong’s own struggle for democracy — which flared up during last year’s Umbrella Revolution, when thousands occupied the streets for over three months — should take precedence over trying to reform China’s communist government. [Source]

Hong Kong students, who were the primary force behind the fall Occupy protests, staged a separate rally at Hong Kong University, shunning the Victoria Park vigil for the first time. From Kelvin Chan at AP:

For the first time in the commemoration’s quarter-century history, some student groups won’t be taking part and will instead hold their own memorials, in a sign of an emerging rift between young and old over Hong Kong identity that took root during the Occupy Central protests.

The vigil is the only large-scale public commemoration of the victims on Chinese soil. Hundreds and possibly thousands of unarmed protesters and onlookers were killed when tanks and soldiers entered central Beijing on June 3-4, 1989, to put down the student-led protests.

“June 4 and Occupy Central are very similar,” said Otto Ng, a 19-year-old student who planned to attend the vigil for the first time. Ng said he hadn’t known much about the events in Tiananmen Square but tried to learn more after last year’s protests erupted.

In both cases, “we are all students, and we are pushing for democracy and freedom,” he said, adding he was upset that dozens of tear gas canisters had been fired by Hong Kong police in a failed bid to disperse tens of thousands of protesters on the streets. [Source]

Alan Wong and Michael Forsythe report for the New York Times on the shifting views of personal identity in Hong Kong:

Surveys have indicated that young people in Hong Kong, China’s richest major city per capita, feel less affinity toward mainland China than before the 1997 handover from British colonial rule. Instead of feeling an attachment to China, they are looking inward, disillusioned by Beijing’s uncompromising stance on freer elections in Hong Kong, which set off huge student-led protests last year.

A long-running semiannual survey by the University of Hong Kong found that at the end of last year, 42.3 percent of people in the city identified as Hong Kongers, while 17.8 percent identified as Chinese — among the highest and lowest numbers since 1997.

Among people ages 18 to 29, 55 percent identified themselves as Hong Kongers, according to another widely cited poll, by the Hong Kong Transition Project.

For some, disillusionment with China has led to calls for more autonomy for Hong Kong, even independence. A separate rally organized by students at the University of Hong Kong was attended by hundreds of people. Some painted Chinese characters on the ground that read “The spark of democracy will glow forever.” [Source]

On June 17, the Hong Kong legislature will vote on electoral reforms, the drafting of which sparked the 2014 protests. Beijing officials have said they will make no concessions on the reforms, which require all nominees for the chief executive position to be approved by a nominating committee that is loyal to the Chinese Communist Party.

Read more about the 2014 Occupy Central protests, via CDT.

Scenes and footage of the June 4 vigils:

Around 1000 students gathered in University of Hong Kong last night for saluting the spirit of June 4 1989 pic.twitter.com/fYDU2mqlYm

26 years on, Hong Kong will not forget what happened in China's capital on June 4 pic.twitter.com/wSbeklMpGb

people starting to file in pic.twitter.com/mX5xBC46lB