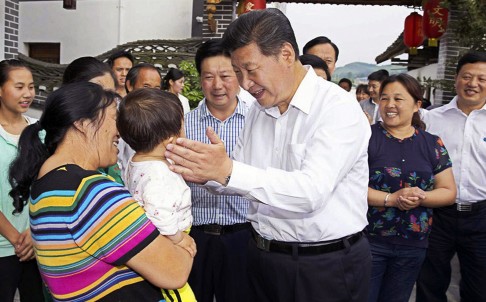 On Monday, President Xi Jinping arrived in Zunyi to begin his tour of the southwestern province of Guizhou. As the president’s motorcade passed through the city, famed for being the site of the Zunyi Conference during the Red Army’s Long March in 1935, a woman standing in the crowd called out Xi’s name repeatedly in what seemed to be an attempt to directly appeal to the president. She was quickly suppressed by those standing around her, her voice drowned out by the noise of bystanders who cheered enthusiastically as the motorcade proceeded. At The New York Times, Patrick Boehler reports that the incident was caught on film:

State news outlets showed enthusiastic crowds greeting President Xi Jinping as he toured the southwestern province of Guizhou this week. They carried the usual images of Mr. Xi leading his identically dressed entourage, as he shook hands and waved to well-wishing bystanders. Photos and videos seemingly shared by onlookers on Weibo, the microblogging platform, did not diverge from the script.

However, one video clip by a bystander captured a very different scene: a woman running toward the presidential convoy, quickly subdued as she yelled to get Mr. Xi’s attention. The clip, taken at Ziyin Road in the city of Zunyi on Tuesday, quickly disappeared from Weibo, but it has since been uploaded to YouTube.

Footage of citizens confronting the Chinese president is rare, as his public appearances are usually well choreographed. [Source]

In addition to removing the video footage, Sina Weibo has censored several related keywords. Guizhou + appeal (贵州＋喊冤) can no longer be searched. The phrase blocking a car (拦轿) has also been removed from search results.