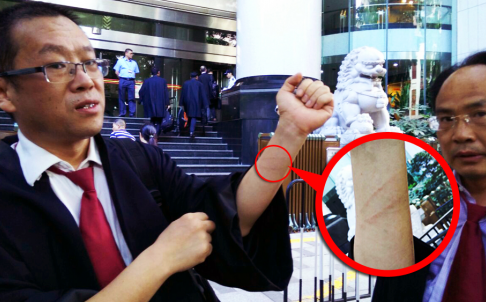 The trial of a lawyer and two activists for inciting subversion was aborted on Friday after the defendants dismissed their own lawyers, a tactic that has repeatedly been used to derail allegedly unfair proceedings. From Didi Tang at the Associated Press:

The move came after the court rejected defense requests that no ruling Communist Party members should be on the bench and that witnesses should be allowed to testify in court, defense lawyer Zhang Xuezhong said.

“Otherwise, there would be no justice to speak of in a case that is highly ideological,” Zhang said.

[…] The defendants, Tang Jingling, Yuan Xinting and Wang Qingying, are accused of inciting the state’s overthrow, largely because of their advocacy of non-violent resistance to the authoritarian government and calls to remember victims of state repression, including people killed in a 1989 crackdown on pro-democracy demonstrations in Beijing, Zhang said.

[…] Zhang said the defense had argued that Communist Party members should not hear the case because the defendants are accused of inciting the overthrow of China’s political system, which is led by the party. [Source]

The lawyers were reportedly surveilled and attacked on their way to the courthouse. According to Human Rights Watch, they had previously been blocked from accessing their clients and case materials, while the defendants themselves were subjected to beatings and forced labor.