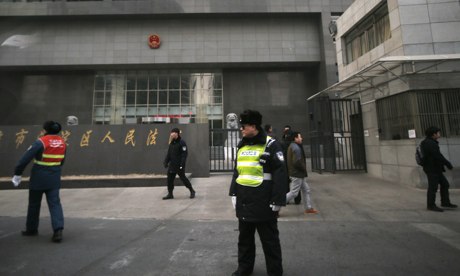 As a part of the ongoing Chinese government crackdown on civil society and peaceful protests, two additional anti-corruption activists from the New Citizens Movement have been put on trial following the initial trial of the organization’s founder Xu Zhiyong. From The Guardian:


The veteran pro-democracy activist Zhao Changqing, who was a student protester in the 1989 Tiananmen rallies, and another activist, Hou Xin, were tried separately in Beijing on charges of “gathering a crowd to disturb public order”, which carries a maximum five-year jail term.

Zhao is accused of organising dinner parties to discuss anti-corruption activism; Hou is accused of unfurling a banner. Both maintain their innocence.

Zhao’s hearing ended shortly after it began when he sacked his lawyers to delay proceedings, the lawyer, Zhang Xuezhong, said in a phone interview. “The court barred most of our evidence, especially our video evidence,” Zhang said. “This is completely against the law.”

As the objectives of the New Citizens Movement echo the Xi administration’s stated goals to fight corruption and promote the rule of law, some observe that the crackdown on activists may harm the Party’s own image in the eyes of the public. From The Economist:

Jerome Cohen of New York University, a leading expert on China’s legal system, says the trial threatens to “make a public mockery” of recent rhetoric from Xi Jinping, China’s president, and senior Chinese judicial officials about promoting transparency. Mr Xi came to power promising a fairer legal system and greater accountability of party officials. But he has at the same time moved to strengthen controls over the internet and over debate among academics and the increasingly vocal middle class. Amnesty International, a pressure group, called the prosecution hypocritical: “Instead of President Xi Jinping’s promised clampdown on corruption, we are seeing a crackdown against those that want to expose it.” [Source]

Despite promises of judicial reform, China’s current court system does not guarantee fair trials. Lawyers working on cases of the detained New Citizens’ Movement members spoke with the New York Times about the impediments they face in defending their clients in court:

“These hearings ignore basic legal precepts, so there’s no way my client can get a fair trial,” one of the lawyers, Zhang Qingfang, said on Tuesday. “It’s just a piece of theater, which is why we will remain silent.”

[…] Lawyers for the jailed New Citizens Movement members — including, in addition to Mr. Xu, seven who will go on trial in the coming days — said they had little doubt that the verdicts had been predetermined. “Whether we are even in the courtroom to defend our clients makes no difference,” said Chen Jiangang, who represents two men scheduled to stand trial on Monday at a separate courthouse in the capital. “We lawyers have been shackled and gagged.”

Viewed against President Xi Jinping’s vows to improve judicial fairness, the complaints by Mr. Chen and other lawyers highlight the challenges the Chinese authorities face in using the courts to contain the New Citizens Movement.

Judicial officials have told defense lawyers that they will be barred from cross-examining prosecution witnesses and from calling witnesses of their own: legal procedures recently advocated by the nation’s top court. Legal experts also said the authorities were violating Chinese law by holding separate trials, a move they said was intended to prevent the defendants from providing testimony that could be useful to one another’s defense. [Source]

Venture capitalist Wang Gongquan, one of the most influential supporters of the New Citizens Movement, was released on bail after confessing that he and Xu had “organised and incited criminal activities to assemble a crowd to disrupt order in a public place.” South China Morning Post reports that many supporters sympathize with Wang and Xu’s plight:

Xu and Wang, who has participated in and funded Xu’s civil rights campaign for years, received a deluge of sympathy and support from fellow activists and internet users. “Facing this illegal prosecution and unjust court, silence is the only choice and [Xu’s] last defence,” one Twitter user posted.

Many say Wang’s confession was understandable given the pressure he was under. “Confession equals surrender … but it is a political tool used by the communists against dissidents,” another Twitter user wrote.

Teng Biao, a legal scholar who worked with Xu and Wang on social campaigns, believed that Wang must have been under extreme mental stress. [Source]

Josh Chin at The Wall Street Journal discusses some of the reactions that Wang’s testimony has generated within China’s business community, a group that has grown increasingly involved in supporting social causes:

“After this business with Wang Gongquan’s arrest, we’ll be more cautious,” said Zhang Fuyu, an Internet investor who supports a variety of social causes. When the government “sees us an enemy, of course we have to be on guard,” said Mr. Zhang.

[…] The former investor’s arrest in September came as a surprise to many in the small but widening circle of social activists in China, shattering the assumption that prominent businesspeople in China were protected from political retribution by their wealth and fame.

[…] In an interview with a local finance magazine earlier this month, real-estate mogul Feng Lun, who founded the predecessor to property developer Beijing Vantone Real Estate Co.600246.SH -2.13% along with Mr. Wang and others in 1991, appeared to chastise his former business partner for his political activities.

“I don’t approve of businesspeople doing nonbusiness things,” he was quoted as saying, likening socially conscious businesspeople to men who consider themselves feminists. “You can’t say you care about women’s issues then change your clothes and walk into the women’s bathhouse. That’s perverted behavior and will get you arrested.” [Source]

Meanwhile, Offbeat China looks at how the detention of Wang Gongquan, Charles Xue, and other socially conscious businessmen  is prompting more and more entrepreneurs to stay out of politically sensitive situations:

For the exact same reason, however, many more Chinese businessmen choose to keep stronger silence. Liu Chuanzhi, the founder of Lenovo, said last summer: “From now on, we businessmen should keep it simple – business is business, and no politics. Our primary responsibility under the current political and economic environment in China is to do good business.” Jack Ma, the founder of China’s ecommerce giant Alibaba, once suggested: “No matter where you are, the government will be the same. Love the government, but don’t marry it or do business with it.” He though that it’d be very dangerous for businessmen to worry about politics, and for politicians to worry about businesses.

Feng Lun, another real estate tycoon, thus explained why he never talked about Wang Gongquan’s case: “I don’t approve of businessmen doing non-business stuff. As entrepreneurs, our core responsibility is to run our businesses, which, in itself, is a good thing for social improvement. It’s far better than shouting a few slogans like a liberal intellectual. It’s also wrong for the media and the liberals to force businessmen into going after ‘the truth.’ Businessmen should only go after capital.” [Source]

In an extensive investigative report into China’s criminal detention system, Ye Zhusheng discusses how detention is used by authorities as a strategy to extract confessions from detainees. From Dui Hua:

Why is it so common to expand both the scope and duration of criminal detention? There are many interpretations. Li Xiujiao told South Reviews that, in the past, confession was the main form of investigation in the public security system. Currently, that idea of investigation has not completely changed: “Locking someone up is the best way to get them to confess. Police often wait for a confession before going out to collect other evidence to support it.”

In terms of getting a confession before arrest, there is also the measure known as criminal summons, but the maximum duration for that is 24 hours. In the view of legal scholars, the original intent of criminal detention was to prevent the effects of a crime from spreading and to avoid obstruction of the investigation. But for all sorts of reasons, the emergency measure of criminal detention has come to replace criminal summons and has, contrary to the original intent, become the routine investigative measure used in practice.

In Li Xiujiao’s view, suspects under criminal detention are held in the detention center, where the special environment imposes a serious kind of mental pressure on them. According to his understanding, people are packed more tightly together and the facilities and conditions are worse in detention centers than in prisons. After being held in a detention center for a while, one of Li’s clients began to display serious mental problems. The endless stream of incidents like the “death by ‘blind man’s bluff’” and “death by showering” confirm this point. Under these circumstances, in Li Xiujiao’s view, many criminal suspects would rather “confess” early and be convicted sooner so that they might serve their sentence in a prison “where the conditions are better.” [Source]