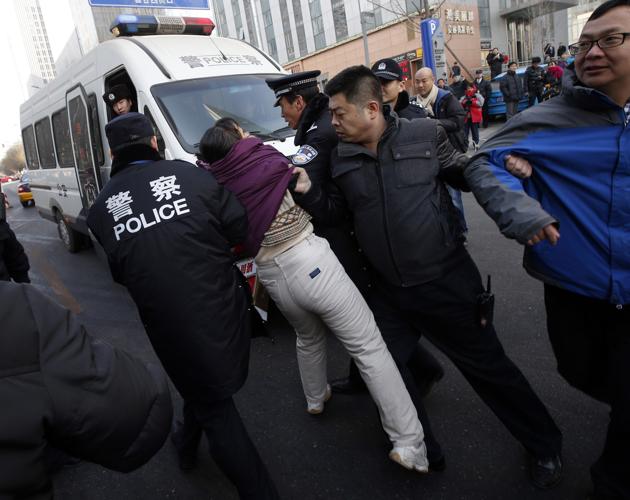 Civil rights activist and New Citizens’ Movement founder Xu Zhiyong was detained in July and formally arrested in August, accused of organizing anti-corruption demonstrations calling for authorities to heed transparency laws. His trial began Wednesday in Beijing, making him the first of several dissidents to stand trial this week under the Xi administration’s larger crackdown on civil society. Leading up to the trial, Reuters outlined Xu’s case, the broader government campaign against anti-corruption activists, and the international rights community’s criticism of the crackdown:

When dozens of activists unfurled banners across the country last March and April calling for officials to disclose their assets, they did so at the urging of one of China’s most prominent rights advocates, Xu Zhiyong.

Through his online essays and Twitter account, Xu criticized the government’s efforts at fighting corruption and prescribed democracy and the rule of law as the solution. “When more than 90 percent of the officials are corrupt, who will counter who? The social movement of asset disclosure is an effort for gradual change to the system.”

[…] China has detained at least 20 activists involved in pressing for asset disclosure, though not all are from the New Citizens’ Movement. Six will stand trial in Beijing and the southern city of Guangzhou on Thursday and Friday.

As the trial began yesterday, AP echoed Chen Min, noting that the calls from Xu and his fellow New Citizens’ Movement activists are very similar Xi Jinping’s own stated goals to fight corruption, and quoted experts on the Party’s unwillingness to allow independent actors to play a role in their stated goals:

Several citizen activists who want many of the same things Chinese leader Xi Jinping says he wants — less corruption and a fairer society — stand trial this week in Beijing in cases reflecting Xi’s intense campaign to quash any potential threat to one-party rule.

[…] “It is really the effort by the regime to prevent any organized opposition,” said Dali Yang, a political scientist at the University of Chicago. “One of the many ironies is that the calls by the defendants are authorized by the Chinese law, and it is very hard to argue that they are subverting the government.”

[…] “It is fear of a big crisis that might overthrow the party,” said political observer Willy Lam of the Chinese University of Hong Kong. “The crackdown is a sign of weakness.” [Source]

Prior to the trial, a post from China Law and Policy asked why Xu is being tried before a higher level court than many of his peers who are facing similar charges:

There are many things to question about Xu’s impending trial, but one aspect that jumps out as out of the ordinary is the fact that Xu’s trial will not be held in a basic trial court.  Instead, the intermediate court has jurisdiction; many of the other defendants arrested and charged for the same crimes will have their case heard in the Haidian Basic People’s Court.   Why is Xu different?  Why is his case being heard by a higher court?

[…] Unfortunately, none of the articles about Xu trial – either in Chinese or English – explain why his case is being heard by the Intermediate Court and not, like the other defendants accused of the same crimes, by the Haidian Basic Court.

[…] New Citizens activist and rights-defending lawyerXiao Guozhen speculates that the police and prosecutors sought to separate the trials so that the statements of the other participants can be used against Xu in his trial.  According to Xiao, in a trial with multiple defendants, one co-defendant cannot serve as a witness.  But when the trials are separated, the other defendant’s statements and confessions can be used in the trial against Xu.  But this all supposes that the other accused will speak out against Xu.

Hopefully Wednesday we will know although as Prof. Jerome Cohen points out, the authorities has done all that it can, such as using one of the smallest courtrooms in the courthouse for Xu’s trial to guarantee that the trial is all but closed to the public.  Another violation of the amended CPL [Criminal Procedure Law]. [Source]

If placing Xi before a higher-level court was an attempt to keep Xu’s case out of public view, efforts were reinforced by heavy security at Beijing No.1 Intermediate People’s Court as the trial began. (Also see a stability maintenance directive from the Beijing Public Security Bureau translated by CDT.) The Telegraph’s Malcolm Moore reports:

Anticipating that some of the hundreds of people who had been helped or inspired by Mr Xu would try to show their support, there were teams of officers scanning the exits of the nearest subway station.

Groups of policemen and plain-clothed guards stood by every tree along the road to the court, scrutinising pedestrians. Large police vans stood ready to bundle off any likely targets. Another lawyer, Liang Xiaojun, was one of those arrested.

Eventually, as the start of the trial neared, the police simply unwound their yellow tape and cordoned off the area altogether.

“Lots of people trying to attend were arrested,” said Teng Biao, a fellow lawyer and friend of Mr Xu. “Some of the parents who were helped by Mr Xu were planning on going but some of them were taken away yesterday by National Security officers and have not returned,” he added. [Source]

The BBC talked to Xu’s lawyer, who noted “he had not been given the opportunity to defend Mr. Xu in a fair court.” The BBC’s coverage also noted that foreign diplomats and journalists are being turned away by security forces outside the courtroom, as can be seen in live broadcast footage：
[youtube]http://www.youtube.com/watch?v=tFrAEnnftTU[/youtube]

SkyNews’ Mark Stone, whose report from Beijing also told of frustrating encounters with security, noted in a tweet that BBC World’s coverage was censored in China:

So @BBCWorld ‘goes to black’ in #china as censors cut transmission the moment report of trial of man critical of the government is aired.

CNN’s David McKenzie and his crew met security officials’  “strong-arm tactics” in their attempt to approach the court, and noted that treatment is often “far worse for Chinese nationals”:

Beijing-based NBC producer Ed Flanagan was tweeting photos and status updates from outside the Beijing courtroom:

Petitioners from Shandong to Ningbo were there. “Of course we know him, he gives us hope!” said one about #xuzhiyong. pic.twitter.com/LhtfrHJpQe

Petitioners outside #xuzhiyong courthouse were given ~30mins to protest before police nabbed em and put them onbuses. pic.twitter.com/DBqXCVedDc

Some petitioners went quietly, others near #xuzhiyong court did not. “move along, nothing to shoot here,” said police pic.twitter.com/6YAwXKPy9f

Meanwhile, inside the courtroom, Xu abstained from offering any defense, standing true to his earlier vow to protest procedural flaws. He did, however, attempt to read a prepared statement, but was quickly interrupted. From the South China Morning Post:

Xu, 40 – a lecturer who founded the New Citizens movement in 2012 to push for social equality and rule of law – refused to offer any defence because the court had barred witnesses and co-defendants from testifying.

But his lawyer, Zhang Qingfang, said Xu made a statement to the court that spelled out his ideals of “liberty, justice and love”. He was, however, interrupted by court officials after 10 minutes when he questioned why China could not follow other countries in obliging officials to declare the assets. [See below for link to Xu’s full statement.]

Zhang confirmed the authenticity of the statement intended to be read out by Xu in court, which has been posted online. Xu’s full statement questioned whether the authorities had ever taken citizens’ constitutional rights seriously and said they had “deep fears” of public trials and “the looming free society”.

Xu’s statement insisted he and other activists were not guilty because they were only pushing for democracy and the rule of law, but he was willing to pay a price for his ideals. [Source]

In an article outlining Xu’s career and previous activism, the Guardian notes that the Party’s drastic reactions to Xu—an activist viewed by many of his peers as overly moderate—may be fueling the New Citizens’ Movement’s growth:

[…T]he reaction of authorities reflects the grouping’s popularity as much as its specific demands. “Gradually there were more and more in the movement, including [people holding] protests on the street,” said Teng Biao, another of the founders and a close friend of Xu.

“From the perspective of keeping stability, officials felt threatened – so they overreacted. They used severe tactics.”

[Human Rights Watch researcher Nicholas] Bequelin added: “I think the basic threat [to officials] is that this was a stage too close to an organised political movement, and so you couldn’t let it grow … I think it was a warning shot to civil society and NGOs in general.”

For the moment, it seems, that shot has been heard. Yet [activist Hu Jia] suggested the trial would ultimately backfire, by highlighting the work of Xu and other New Citizens. [Source]

No verdict has yet been delivered by the court. However,  New Citizens’ Movement activist Wang Gongquan, detained in September on charges similar to Xu’s, was reportedly released on bail after expressing regret for his crimes. From the Guardian:

Chinese courts will try seven more New Citizens’ Movement activists over the next two days. Three stood trial in China’s south-east in December, but have not yet been sentenced.

On Wednesday evening, the court announced that it would grant bail to Wang Gongquan, a prominent venture capitalist who has publicly supported the group, for repenting of his crimes. Wang has been in detention since September.

“Wang Gongquan admits that together with Xu Zhiyong, he planned and incited the illegal, criminal activity of gathering a crowd to disturb public order,” the court posted to its official microblog. “He has profoundly questioned his behaviour. [Source]

Update: Xu Zhiyong’s full closing statement to the court has been translated into English by China Change. He wrote:

By trying to suppress the New Citizens Movement, you are obstructing China on its path to becoming a constitutional democracy through peaceful change.

And while you have not mentioned the New Citizens Movement throughout this trial, many of the documents presented here relate to it, and in my view there is no need to avoid the issue; to be able to speak openly of this is pertinent to the betterment of Chinese society.

What the New Citizens Movement advocates is for each and every Chinese national to act and behave as a citizen, to accept our roles as citizens and masters of our country—and not to act as feudal subjects, remain complacent, accept mob rule or a position as an underclass. To take seriously the rights which come with citizenship, those written into the Universal Declaration of Human Rights and China’s Constitution: to treat these sacred rights—to vote, to freedom of speech and religion—as more than an everlasting IOU.

And also to take seriously the responsibilities that come with citizenship, starting with the knowledge that China belongs to each and everyone one of us, and to accept that it is up to us to defend and define the boundaries of conscience and justice. [Source]