Netizen Voices: Prisoners of Conscience Then and Now 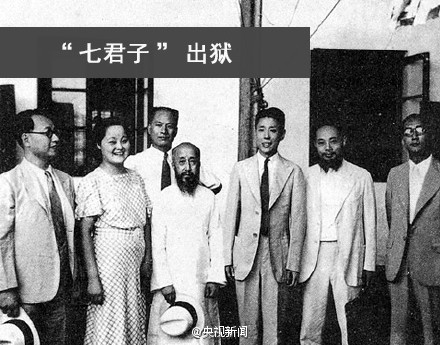 A CCTV Weibo post about the 78th anniversary of the “Seven Gentlemen Incident” fell flat for netizens. The story of the Nationalist government’s release of seven political activists during World War II casts critical light on the mass detention and interrogation of rights defense lawyers and activists that began two weeks ago.

On July 15, 1936, the National Salvation Association issued a statement calling on the Nationalist government to end its fight with the Communists and instead join forces in the war against Japan. Seven key figures in the movement were arrested after a rally on November 23, 1936, and stood trial in Suzhou the following year. Sun Yat-sen’s wife Soong Ching-ling was among the participants in the movement to free the Seven Gentlemen, who were released on bail on July 31, 1937:

YangshiXinwen [CCTVNews] (@央视新闻): #70YearsofVictory Unwavering “Seven Gentlemen” Released from Prison: On July 31, 2015, the Nationalist government was forced to release the “Seven Gentlemen.” These seven were leaders of the National Salvation Association: Shen Junru, Zou Taofen, Li Gongpu, Sha Qianli, Shi Liang, Zhang Naiqi, and Wang Zaoshi. They were arrested for calling on the Nationalist government to cease the civil war. After they were released from prison, they continued their work in the National Salvation Movement of resistance to Japan. (July 31, 2015) [Chinese] 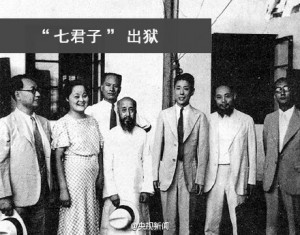 Netizens reminded CCTV of the glaring difference between this story and the unfolding saga of activists today, as well as the somber fate of some of the Seven Gentlemen under Mao—Zhang Naiqi held high-level posts from 1949 to 1957, when he was classified as a rightist. He was denounced in 1958 and beaten by Red Guards during the Cultural Revolution.

Namiting (@纳米霆): Are these people all lawyers? So many have been caught.

Gangtiebanwenrou (@钢铁般温柔): If they locked you up now, you’d never come out.

Duxiaoxian (@独小仙): Don’t we have a Nobel Peace Prize winner behind bars? You speak highly of great men, but backstage you do something else. [Chinese]