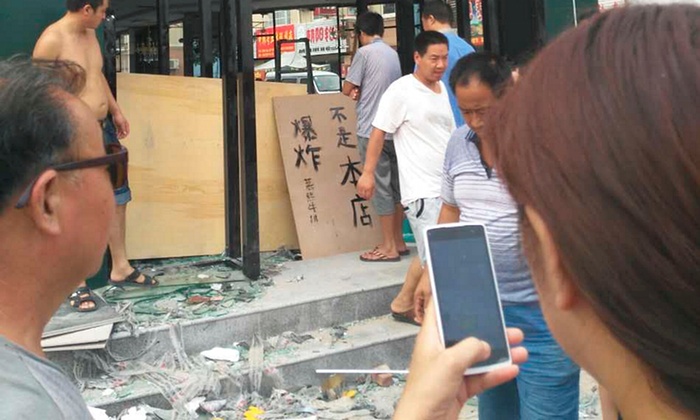 The Guardian reports on the deadly detonation of a bomb outside a park in Heze, Shandong on July 21. The blast injured 24 bystanders and killed two, including the 33-year-old man who detonated the bomb:

Initial investigations indicated that the suspect committed suicide but it was not yet clear what material he used to spark the blast, press officer Li Meng of the county public security bureau said.

Xinhua named the dead suspect as Xie Xingtang, 33. Li said the suspect was unemployed and had been suffering from liver cirrhosis. He had been admitted to hospital many times, but medical treatment had failed.

The blast happened outside the park entrance in a small square, where senior citizens had likely gathered to watch Chinese opera and participate in other activities, Li said.

There have been a series of cases in China where people with grievances or who were involved in feuds have used homemade bombs to blow up themselves and others. Bombs are often the weapon of choice because firearms are tightly controlled and difficult to obtain. [Source]

At The Diplomat, Shannon Tiezzi situates the deadly blast into a host of similar cases where people have committed public violence after becoming frustrated with China’s infamously inefficient petition system in recent years—including perhaps most famously that of Ji Zhongxing, who in 2013 detonated a bomb in the Beijing airport after unsuccessfully seeking compensation for an alleged police beating, and won praise from netizens. Tiezzi compares these cases to the recent upswing in violence in Xinjiang, which authorities have responded to with a controversial and steadily escalating crackdown on on terrorism, suggesting that the former may be more dangerous:

The rise of suicide bombings as a technique for terrorists in China’s Xinjiang province, where tensions between ethnic Uyghurs and Han Chinese are high, is indeed a noteworthy (and troubling) development for China. But suicide bombings in China are not a new phenomenon, although generally the attacks have less to do with ethnic tensions and more to do with an individual’s discontent, as seems to have been the case in Shandong this week. These attacks aren’t terrorism in the classic sense — the individuals behind them seem motivated not by grand political aspirations (the establishment of a separate state or the downfall of the government) but by personal frustration: the loss of a job, land seized by a local government, a beating by China’s law enforcement.

[…] In each of these cases—and possibly Jie’s as well, although information is still scarce—the bomber was motivated by a sense of being treated unjustly by local government officials, coupled with a lack of alternative options for expressing grievances. As a recent Diplomat article noted, China’s petition system is supposed to be the avenue of last resort for the Chinese people, but the system is overburdened and inefficient.

It now appears a handful of Chinese have chosen an extreme, deadly path for airing their grievances—suicide bombings. These cases receive less media attention, both in China and abroad, than the classic terrorist bombings in Xinjiang and Beijing, but they are more common, and perhaps more dangerous to China in the long run. [Source]