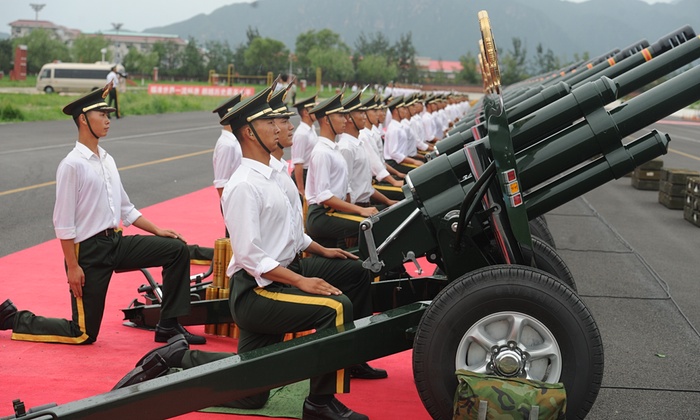 All websites: Implement control requirements issued within 24 hours of August 23 on the entire Internet. All networks and clients rigorously supervise news posts related to the military parade. Specific requirements are as follows:

Beijing is preparing for a large military parade to commemorate the 70th anniversary of the end of the Second World War on September 3. Controls are tight on and offline: over the weekend, authorities temporarily shut down major roads and public transportation, as well as businesses in the central regions of the capital to accommodate the dress rehearsal. Nectar Gan at South China Morning Post reports:

Propaganda officials yesterday escorted nearly 100 foreign journalists on a tour of a military base outside Beijing, where troops are running through drills. The parade will feature 12,000 soldiers and about 500 pieces of military equipment, much of it never displayed publicly before.

Roads surrounding Tiananmen Square and Changan Avenue, where soldiers will march, have been shut down. Additional major roads in central Beijing, including in the central business district, were being added to the list throughout the night.

Vehicles have been banned from parking in the area or near to it. The road restrictions will be lifted when the rehearsal is over at around noon.

Public transport has also been affected. The entire section of the subway’s Line 1 suspended operation beginning at midnight. Some stations on Line 2, 4, 9 and 10 were also closed. Service will resume after noon.

A total of 253 bus lines have been affected, with 69 stopping service altogether. [Source]

Hotel reservations and events at the National Center for the Performing Arts near Tiananmen were also affected by the parade rehearsal. From China Real Time’s Chuin-Wei Yap:

The center will as a result cancel a handful of performances, including Ladysmith Black Mambazo’s Saturday concert. Another show, involving the BBC Symphony Orchestra, will also have to go, according to the notice.

“Please go to your point of purchase for exchange or refund policies,” it said.

Reservations staff at the Grand Hyatt Hotel said rooms at the hotel can’t be booked from Aug. 31 to Sep. 3 as a result of government directives. The government has also said it will shut down wireless Internet and radio signals around Tiananmen on Sept. 3, the day of the, um, festivities.

In the entertainment enclave of Sanlitun, shops and bars have been told to shut from Saturday afternoon until Sunday afternoon, to allow for rehearsals. Amateur radio stations, campus broadcasters and remote-controlled planes are also banned citywide. [Source]

Yap notes that some compared the situation with martial law. On Twitter, human rights activist Wen Yunchao satirically likened the parade rehearsal to a scene from the June 4th 1989 crackdown on pro-democracy protests at Tiananmen. The tweet reads: “An image of the parade rehearsal that I risked my life to take.” The celebration of peace may also serve as an effective ad for China’s arms industry, which has been finding growing numbers of customers abroad. Xinhua reports that more than 500 pieces of China’s latest military equipment, many of which have never been publicly displayed before, will be featured at the official parade in September:

The People’s Liberation Army (PLA) will debut new weapons and equipment during the military parade, many of which are among the world’s most advanced, said a military source. During the parade, the navy will display its latest anti-ship missiles,ship-to-air missiles and carrier-based aircraft, while the air force will bring long-range bombers, fighters and airborne early warning and control (AEWC) aircraft.

The armaments on display will include the army’s newest helicopter gunships and battle tanks as well as intermediate-range conventional and strategic ballistic missiles from the Second Artillery Force.

Observers believe that the purpose of the military parade is not simply to showcase China’s growing military might to an international audience but, more importantly, to impress the Chinese public and strengthen the country’s national identity. Tom Phillips at The Guardian reports:

China’s observers say Xi’s decision to put on such a massive show has several intentions. Partly it is an attempt to pile political pressure on regional rival Japan – with whom Beijing is embroiled in a festering territorial dispute in the East China Sea – by reminding the world of the horrific crimes its troops committed during the war years. Partly it is intended to use the country’s increasingly sophisticated military capabilities to flex China’s muscles on the world stage.

But most experts agree that Xi’s key target audience is the Chinese public. “It seems to me that the whole thing is really for internal consumption and is really part and parcel of this ramping up of the nationalist rhetoric in the story that Xi and co are pushing,” said Nick Bisley, the executive director of La Trobe Asia. “You are not doing this to impress the Pentagon.” Beijing was attempting to use a “Stalinist-style parade” to remind China’s 1.3 billion citizens how only the Communist party could keep their country strong and safe, Bisley said. “This is not a sophisticated cosmopolitan nationalism. This is an old-school tub-thumping view of national greatness and how you express that,” he said. [Source]

Representatives of 49 other countries including 30 national leaders will attend. Despite much speculation, Japanese prime minister Shinzo Abe will not be among them, due to parliamentary commitments as he rolls back aspects of the country’s pacifist post-war constitution. Chinese officials have stressed that the celebrations “are not targeting Japan, nor the Japanese people.” On the same day that Abe decided to skip the parade, the state-owned People’s Daily tweeted an image showing cartoon figures of Japanese soldiers literally being used as targets in an archery field in Guangdong: To further mark the occasion, the Chinese government is reportedly considering amnesty for four categories of prisoners including those who fought in the war against the Japan. Xinhua reports:

The four special cases include:

1) Criminals who fought in China’s war of resistance against the Japanese invasion and the civil war against the Kuomintang (KMT) army.

2) Criminals who participated in wars to safeguard national sovereignty, security and territorial integrity after the founding of the People’s Republic of China in 1949. Those found guilty of serious crimes are excluded.

3) Criminals who are 75 or above, and those with physical disabilities that are unable to care for themselves.

4) Those who committed crimes while under the age of 18 and received a maximum sentence of three years in prison, or those whose remaining prison term is less than one year. Again, those who were convicted of serious crimes are excluded.

Li said the amnesty deal should not create fear among the general public. Felons convicted of violent crimes such as homicide, rape, terrorism or narcotics will not qualify.