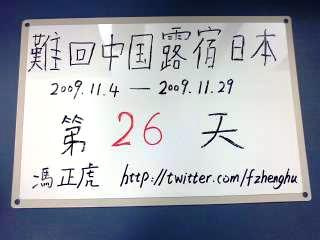 Today is my 26th day camped at the door to Japan.

For breakfast I had a piece of pizza, a salad, and a glass of purified water. Standard western fare, I suppose. If I could have heated the pizza up in a microwave for a moment, I’m sure it would have been quite delicious. I still have a piece leftover. That will be lunch.

At 11:00 a.m., a group of Lufthansa flight attendants walked over to me. Later, three stewardesses came back to salute me. One of them reached out to shake my hand. She said to me, in English, “I’m German. I saw you on television,” and she wished me good luck. I told her, “I speak a little English.” My English listening comprehension is poor, but I was luckily able to understand a few key words. One of the other stewardesses gave me a box of German apple juice. Another one of them turned away and came back a moment later with a heart-shaped piece of chocolate. Some German was written on top of it. It was probably a gift that their airline company gives to customers. I thanked them for their kindness.

I am a very well-recieved person. Foreigners and Chinese all seem to like me, a gentle guy. Even the State Security Police in China found me to be a reasonable, good person. Why are government leaders so afraid of me? They’d rather incite this great national shame, even if it means disrespecting our nation and the disregarding the credibility of our laws. This is a huge misjudgment on the part of relevant departments in the government. They have gravely overestimated my importance. In these officials’ beleaguered mindset, anyone coming to petition them is considered an enemy. If they happen across someone with powerful capabilities, they look at them as powerful enemies that must be vanquished. I’m really not that powerful. I am merely an ordinary intellectual.

At 11:36 a.m., I received a phone call from Canada. A few Chinese international students had arranged a phone call with me. One of them had randomly came across my story on Twitter. He was astonished. He quickly shared the story with his classmates, and everyone was shocked. How could something like this happen in the powerful nation of China? This was a national shame. These young people were moved by my actions. I’m a an elder they should respect. We chatted for a long while. There was no feeling of a generational gap. We shared our happiness and faith with each other. One of the students, a Christian, told me she would pray for me. I said to her, “Chaplain Xiong Yan blessed me on Thanksgiving. He told me, “God is with you,’ and I say the same to you.” Our call lasted for about 25 minutes. I’m very happy to interact with young students, perhaps because of my experience as a university professor.

At 1:11 p.m., I received a call from a Shanghai man residing in Canada. He told me, “I’ve been following your story since the first time you returned to China, and I always read your articles. Your actions have moved me. I’m proud that we can count someone like you among us as people from Shanghai.” Before we spoke for very long, we suddenly lost connection. It turned out that my phone had run out of power. And unfortunately my backup portable charger was out of power as well. So I could only leave the phone off and charge the battery.

Recently my phone has been ringing off the hook all day, one call after another. If it’s not an interview, it’s someone from inside China or an overseas Chinese person calling to ask how I’m doing. Luckily, my phone service only charges a one-way fee–I’m not charged when receiving a call–otherwise, I wouldn’t want to be answering the phone so much. I wouldn’t be able to pay for all that service. My phone’s battery capacity is great. My backup portable battery can hold four times as much charge as a normal cell phone battery. I can charge my phone at any time, so I’ve never been cut off from being able to use my phone. The instance where my call was dropped that I just described was the first time something like that had happened. That was my own carelessness. I thought the portable charger was completely charged, so I hadn’t charged it in advance.

I received a wireless Internet USB device from a trusted Japanese friend, which I can use to view my Twitter account and visit the online world.

Over these 20-odd days, I’ve become accustomed to life without the Internet. Now that I have Internet access, I still haven’t become dependent on it. I only need to use it for a bit every once in awhile, and am not online for very long each day. There are objective conditions that restrict my online time: 1) interviews, answering phone calls and writing takes up the vast majority of my time, sometimes even my rest time, so I don’t have much time to go online; and 2) for every hour that I use my laptop, it must charge for two. And it’s not convenient for me to use my laptop with it plugged directly into the outlet. One must have some self-discipline when living off others’ resources. It’s best to cause as little trouble as possible. When I do use the computer, my first priority is writing. It takes a lot more power to use the USB wifi device.

Since opening my Twitter account on November 13, I’ve received 489 texts to my Japanese cell phone. Once I got online, I saw hundreds of messages in my mailbox, mostly from Chinese people from inside China sending me regards and showing their support. On Twitter, there were 4,850 individuals who had send me direct messages. They had left me an enormous amount of comments.

There were many, many reports and statements of solidarity online about my ordeal from media all over the world. The whole world was demanding that one have the right to return to one’s own homeland. “Feng Zhenghu denied entry to his home country is a national shame” had become a national catchphrase of the Chinese people. I was really very moved. There were so many people all over the world who really cared about and supported me. But I also feel very apologetic, as it is already not in my power to respond to and thank everyone individually. I ask for everyone’s forgiveness and understanding.

I shall repay everyone’s concern through my actions. I can go on without saying a single word, but I must see my mission out to its completion. China needs action from each and every one of us.