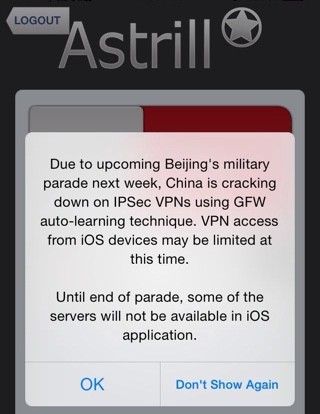 Following the shutdown of two censorship circumvention tools in the past week under apparent pressure from Chinese authorities, controls have been further tightened ahead of next week’s World War II anniversary parade in Beijing. The step is part of a broad range of measures intended to prevent disruption, including media directives, road closures, musical performance cancellations, and a remote-controlled aircraft ban. South China Morning Post’s James Griffiths and He Huifeng report:

Popular virtual private network (VPN) provider Astrill warned users on Wednesday that they may suffer service outages between now and the parade on September 3.

“Due to upcoming Beijing’s military parade next week, China is cracking down on IPSec VPNs using GFW auto-learning technique,” Astrill said in a message to users.

[…] In January, many popular VPN services were disrupted by what the People’s Daily, the official mouthpiece of the Chinese Communist Party, described as an “upgrade for cyberspace sovereignty”. [Source]

Author Murong Xuecun discussed the use of these tools in an op-ed at The New York Times last week:

I had known that the Chinese Internet was subject to monitoring and control, but I had never grasped what that meant. On the few occasions that I had traveled abroad, I was usually too busy to spend significant time online. Only when I’d tasted freedom at the urging of my friend did I know the bitterness of its absence.

I have now gone through eight V.P.N.s. No one seems to know why or how a V.P.N. is shut down. It might be working normally one day, and the next, it’s down. You might think it is just another temporary stoppage, but after many attempts to get back online, you realize that your V.P.N. was blocked.

The government’s firewall technology has become ever more sophisticated, and the cracks in the firewall have gotten smaller. Nearly every day a new V.P.N. provider is shuttered, and it is harder and harder to find a reliable long-term option. [Source]

MIT Technology Review’s Tom Simonite reports this week on one effort to resist this trend:

Improved censorship technology has made it harder for people in countries such as China, Iran, and Syria to bypass Internet controls and access uncensored information and services. Governments can now block anticensorship tools such as the Tor anonymity network or encrypted VPN connections, for example. But a new censorship evasion tool called Marionette may help reverse that trend.

Marionette helps Internet traffic that would normally be blocked masquerade as ordinary, permitted online behavior. It can be configured to make your activity emulate just about any type of “innocent” activity, such as online gaming or Skype, by analyzing samples of that kind of traffic. Marionette can even be programmed to respond in the right way to maintain its cover if actively probed by a censorship computer system, a tactic China sometimes uses to investigate suspicious connections before blocking them.

“It sort of levels the playing field,” says Scott Coull, a security researcher with security firm RedJack, who helped develop Marionette. “If China is updating its censorship, you can adapt, too.” [Source]